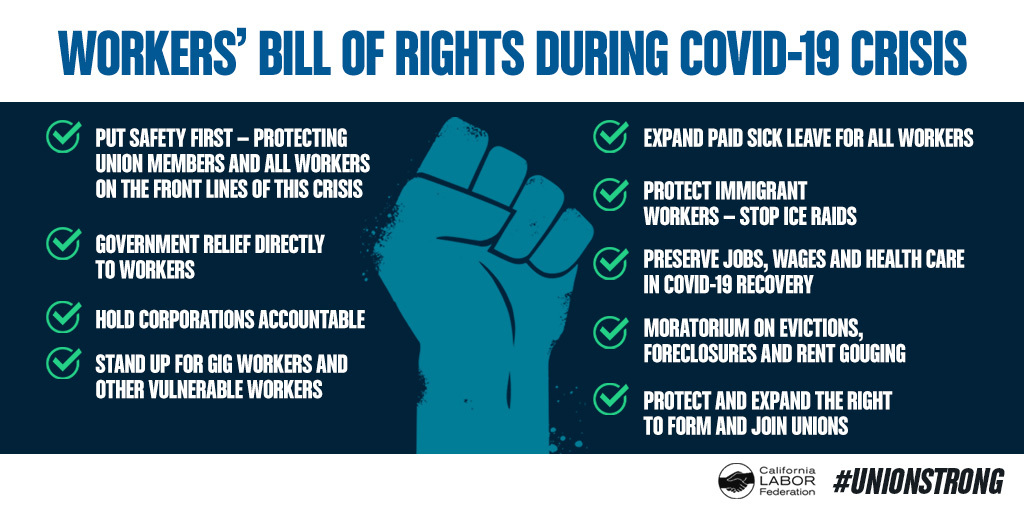 As the COVID-19 Pandemic continues its rampage across North America, Building and Wood Workers (BWI)-affiliated Trade Unions have launched numerous initiatives to protect the jobs and wages of their Members and Workers in general, especially Immigrant and Migrant Workers.

This was fully chronicled in BWI’s In the United States, the International Union of Painters and Allied Trades (IUPAT) Campaign, that was built around a platform that included four pillars designed to protect jobs and Workers: (1) Immediate cash infusion and extended medical leave; (2) Health care protections for both the insured and uninsured; (3) Bolster/secure retirement plans; and (4) Additional investment in American infrastructure.

Meanwhile, the International Association of Sheet Metal, Air, Rail and Transportation Workers (SMART) called for the reinstatement of thousands of Railroad Workers who were laid off in recent years to help in transporting Personal Protection Equipment (PPE) supplies around the country.

On the other hand, the International Association of Machinists and Aerospace Workers (IAM) called on the Federal Government to invoke the Defense Production Act to ensure adequate PPE for Workers.

This was after the IAM and the National Federation of Federal Employees Federal District 1 (NFFE-IAM) sounded the alarm over several Veterans Affairs (VA) Health Care Facilities with a lack of PPE and rising COVID-19 cases.

In Canada, Trade Unions pushed the government to implement the Canada Emergency Response Benefit (CERB) and the Canadian Employment Wage Subsidy (CEWS), which covers 75% of wages.

Unifor, Canada’s largest Private Sector Union, lobbied for funding for public transit, which the government of British Columbia decided to provide on in early May for Vancouver.

The Unionists also campaigned for Health and Safety Protocols in workplaces.

While documented Immigrant Workers can generally access the same COVID-19 Benefits as Non-Immigrant Workers in both the U.S. and Canada, Undocumented Workers do not receive any benefits under the CARES (Coronavirus Aid, Relief, and Economic Security) Act.

The situation of Temporary Foreign Workers is also precarious.

BWI Affiliates also called for better protection, living conditions and working conditions for Migrant Workers, noting that the crowded accommodation in which they live and work are conducive to spreading COVID-19.

To Directly Access This Labor News Story, Go To: www.bwint.org/cms/american-and-canadian-unions-work-to-protect-jobs-wages-and-migrant-workers-1957