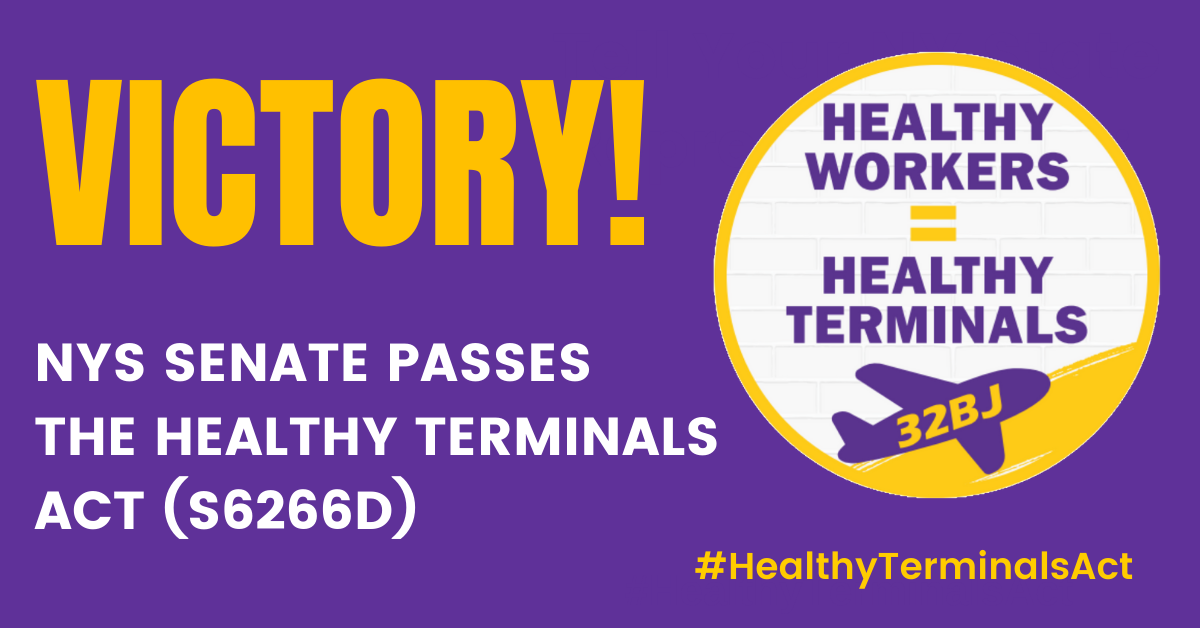 (ALBANY, NEW YORK) - As many as 25,000 Airport Workers, including predominantly Black and Immigrant Wheelchair Attendants, Security Officers, Cabin and Terminal Cleaners, and other sub-contracted Airport Workers at JFK and LaGuardia Airports are a signature from away from Governor Andrew Cuomo from winning life-saving Health Care Benefits.

“Thousands of sub-contracted Airport Workers ‘from all backgrounds have fought for years to transform these low-wage jobs into family sustaining jobs with good benefits that strengthen our communities and economy,’” 32BJ Service Employees International Union (SEIU) President Kyle Bragg said.

“Essential Airport Workers ‘secure’ terminals, ‘sanitize’ planes, ‘keep passengers safe and our economy running.’  They are ‘predominantly’ Black and Immigrant Workers ‘who have been devastated by the COVID-19 Pandemic, all the while dealing with systemic racism that impacts every aspect of their lives.’  The New York State Legislature, especially Bill sponsors State Senator Alessandra Biaggi and Assembly Member Alicia Hyndman, ‘have set an example for the Nation to follow with this responsible and moral policy to Workers and passengers, both healthy and safe.’  We ‘look forward’ to Governor Cuomo signing the bill,’ which could be the Nation’s farthest-reaching policy to impact the health and well-being of Essential Workers of Color,’” he said.

With 175,000 Members in 11 states and in Washington, D.C. - including more than 8,500 New York City-area Airport Workers, 32BJ SEIU is the largest Property Services Union in the country.

Vladimir Clairjeune, a Haitian American JFK Security Officer who is currently laid off, said: “Workers of Color ‘have kept this country together throughout the COVID-19 Pandemic, even without the basic protection of adequate’ health care.  ‘This is a victory in the much larger fight for racial and economic justice.’  ‘In our corner of the world, we have shown we can make a difference for the thousands of Black, Latino and Immigrant Workers who make up the fabric of our airports.’”

In 2011, as many as 10,000 sub-contracted Workers at JFK, LaGuardia and Newark International airport mounted one of the most successful Union Organizing Campaigns for fair wages and Union Rights since the creation of the Fight for $15.

Since then, 32BJ SEIU Members at New York and New Jersey Airports have been at forefront in the fight for dignity and respect on the job and the professionalization of vital services at the region’s airports.

Eventually, these Workers went on to win the Nation’s highest mandated minimum Wage of $19 an hour by 2023.

However, their compensation did not include quality, affordable health insurance.

Airport Workers are currently exposed to a hodge-podge of employer-provided health plans, including many that won’t even qualify as health insurance, with sky high premiums, co-pays and deductibles.

Many often choose to go without health insurance.

And the risks that come with working in some of the most heavily trafficked airports in the world without health insurance are heightened when health scares happen.

The COVID-19 Pandemic, as well as previous scares like Ebola and SARS, only exposed what Workers in major transportation hubs have always known - they are on the front-lines of any health crisis.