Published Thursday, July 23, 2020
by The Intercept 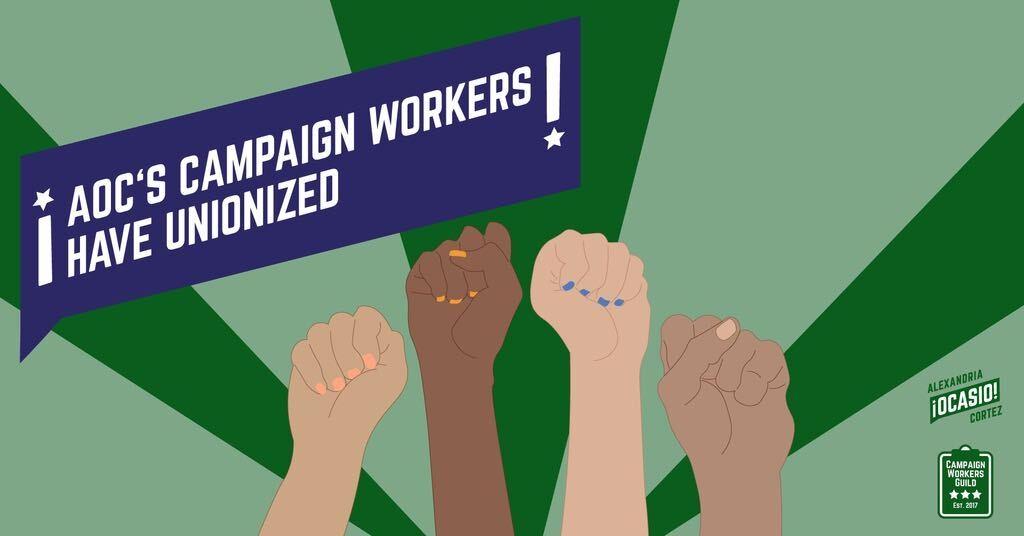 As part of the contract, Ocasio-Cortez Campaign Staff secured a salary floor of at least $4,000 per month, an $18 Minimum Wage for Hourly Employees, and a number of Paid Leave Policies.

Notably, the contract caps salaries for managers, making it so that the highest paid Employee of her campaign is paid at a rate no more than three times the rate of the lowest paid Full-Time Employee.

Putting a salary limit on managers is still uncommon, but Staffers for Bernie Sanders’s 2020 Presidential Campaign locked down a similar provision in their contract earlier this year.

“Workers’ Rights are the cornerstone of an economy that puts humanity first,” Ocasio-Cortez said in a statement announcing the contract. “I’ve lived without health insurance or dignity in the workplace and I applaud the work our team has done to raise the bar for all Workers.”

The deal also includes Paid Time Off to vote in any election, at least 12 weeks of Paid Parental Leave, an upcoming bonus, a fund to help underwrite classes to help with professional development, and stipends to cover remote work-related expenses - and even child care.

The Campaign Workers Guild, which was formed in late 2017 by a group of Former Campaign Workers, has represented Workers on dozens of campaigns, including Andrew Yang’s and Julián Castro’s for President, and the 2018 campaigns of Jess King in Pennsylvania and Cynthia Nixon in New York.

In 2018, the Campaign Staff of Randy Bryce, a Union Ironworker who ran for the Wisconsin seat held by then-House Speaker Paul Ryan, made history as the first in the country to form a Union.

Though the Campaign Workers Guild didn’t provide the full contract, excerpts shared with The Intercept show entire sections dedicated to robust Anti-Discrimination Policies and to fighting the exploitative working conditions that often develop in political campaigns, which can be grueling.

And as one of the more progressive Democrats in Congress, the Unionization of Ocasio-Cortez’s Campaign Staff is also about the political messaging in the contract, and the lawmaker practicing the same policies she promotes.

Members of the Bargaining Committee told The Intercept that they hope their contract inspires other campaigns to fight for these protections, though they ultimately want these rights to be universal and extended to every Worker.

There’s also a section that outlines protocol for investigating Workplace Sexual Harassment and assault complaints, including a provision saying that no Employee will be retaliated against for simply reporting misconduct and perceived retaliation could be grounds for discipline.

Other policies in the contract are meant to encourage a healthy work environment.

Unit Members, for example, are not required to work with any manager who has more than three documented instances of hostile behavior, and will not be expected to work more than six consecutive work days.

But the biggest highlight, according to Meg Reilly, who serves as the President of the Campaign Workers Guild, is the Overtime Pay.

“(he Campaign Workers Guild) ‘has negotiated dozens of contracts and we’ve gotten close, we’ve fought for overtime in every contract, we have won it quite rarely and it’s a big cultural shift,’” Reilly said. “So for these Campaign Workers across industries to get overtime after forty (hours) ‘is monumental.’”

To Read This Labor News Story In Its Entirety, Go To: https://theintercept.com/2020/07/13/ocasio-cortez-campaign-staff-unionize/