Whatever Happened To Hazard Pay? - Some Democrats Are Mounting A Last-Ditch Effort To Secure Extra Pay For Essential Workers, But It Doesnât Look Promising 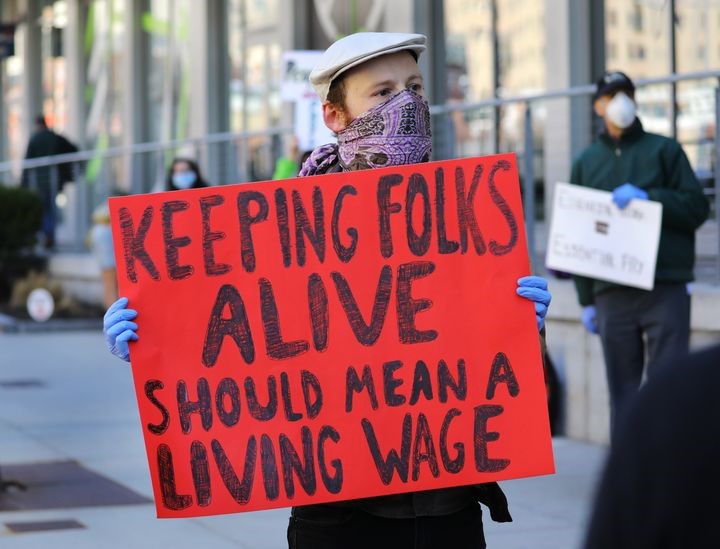 The only curve the U.S. has managed to flatten during the Coronavirus Pandemic is wage growth for Essential Workers.

Many Front Line Employees in grocery stores and other essential businesses received hazard pay increases at the start of the crisis, but most of those temporary pay bumps have since been phased out, which effectively amounts to a pay cut for many Workers amid a record-setting surge in COVID-19 cases.

And - most Workers in hospitals and other health care facilities never received any additional pay at all, despite being hailed as “heroes” by politicians.

Meanwhile, Congress has not approved a plan for Federally-funded Hazard Pay that would boost wages for Nurses, Bus Drivers, Retail Clerks and others who were asked to continue working through the pandemic.

The lack of a pay bump struck many Essential Workers as particularly unfair in light of expanded Unemployment Benefits that paid laid-off Workers more than the typical low-wage job.

House Democrats included a hazard pay measure in a stimulus package they passed in May, but it has not been taken up in the GOP-controlled Senate.

Now that many Non-Essential Workers are clocking in again during the public health crisis, it may be even more difficult for Democrats to secure a pool of Federal funds for Front Line Workers in health care and other essential fields.

U.S. Senator Sherrod Brown (Democrat-Ohio), one of the lead boosters of the plan, said he doesn’t believe the window has closed.

It’s still a Democratic priority, even as Congress wrangles over a host of other issues, Brown recently told reporters on a call hosted by the United Food & Commercial Workers (UFCW) Union.

“We will ‘continue to insist on that,’” the Senator said of the hazard pay. “I ‘think we draw a line there to say this is essential in the legislation we’re pushing for in these negotiations.’  ‘It’s absolutely something we want to insist on.’”

However, Senate Majority Leader Mitch McConnell “doesn’t feel any urgency to do anything,” U.S. Senator Elizabeth Warren (Democrat-Massachusetts) said on the same call.

A spokesperson for Senate Minority Leader Chuck Schumer said hazard pay “remains a priority” for the Democrats, but it’s part of a long wish list related to Coronavirus funding - which includes getting Federal aid to cities and states, sending out additional stimulus checks, extending the $600 weekly Federal Unemployment Benefits, passing a new moratorium on evictions, and securing funding for the cash-strapped U.S. Postal Service.

To Continue Reading This Labor News Report, Go To: www.huffpost.com/entry/what-happened-to-hazard-pay_n_5f11e55fc5b619afc4011143