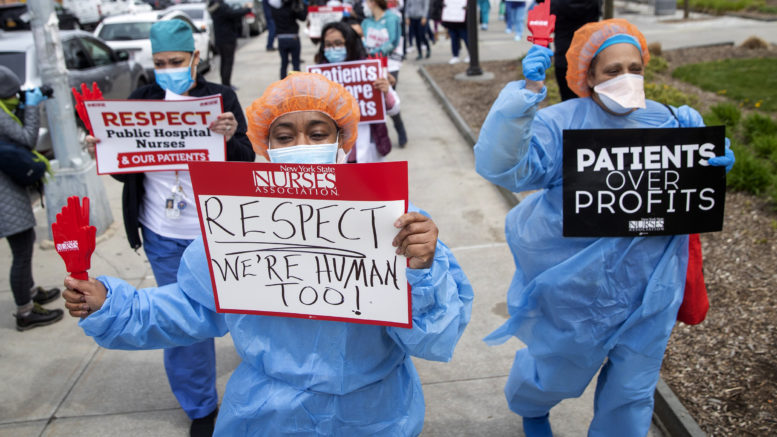 Payday Report Updates WNYLaborToday.com on a Nurse Strike Wave that is growing across the United States in places like Southern California, Houston and El Paso:

Scabs Nurses Brought Into Bust Strike In Illinois - As the country undergoes a severe surge of COVID cases, many hospitals are still short of PPE (Personal Protection Equipment).  As such, Nurses across the country are going on Strike to demand these vital protections.  For example, Nurses at the AMITA Saint Joseph Medical Center in Joliet, Illinois went out on Strike. In response, the hospital has even brought in “Scab Replacement” Nurses to keep the hospital staffed.  The Nurses report making progress at the bargaining table and feel confident they are close to a deal.  “It’s getting better,” union Leader Pat Meade told The Joliet Herald-News, but she warned that they gave up “so much” in the deal as well.   For more, head to The Joliet Herald-News.

Nurses In Riverside, California Strike Over Understaffing - As Southern California gets hit by another round of COVID outbreaks, Nurses at Riverside Community struck over unsafe working conditions, a lack of PPE, and severe understaffing that has forced many Nurses to work around the clock.  “I ‘went more than twenty hours without a sip of water.’  ‘How can a Nurse safely function under unnecessarily extreme conditions like that?,’” said Service Employees International Union (SEIU) Local 121 Registered Nurse (RN) Member Kathy Montanino. “I ‘refuse to place my patients in jeopardy by leaving them with a break relief RN that has a double or triple load of patients.’”  For the most up-to-date news on their bargaining, go to the Union Local’s website.

Houston Nurses Go On Wildcat Strike As COVID Surges - In Houston, about 30 Nurses at Encompass Rehabilitation Hospital went on Strike for the hospital’s lack of PPE.  “The patient ratios ‘are critically high to the point where we are not able to provide quality care to the patients or safe care to the patients,’” Nurse Allysia Cyprien told KPRC. “The patients ‘are asking me why am I not wearing what they would call a moon suit.’  They’re ‘asking me where is my equipment?’  I say: ‘This is all they are giving me.’”

And in El Paso Texas: Latina Nurses Face Discipline For Reporting Racist Behavior - A group of five Latina Nurses at HCA-owned Las Palmas Medical Center in El Paso, Texas were discussing an article about Florida’s governor using Immigrants as a scapegoat for COVID outbreaks.  A Supervising Nurse interrupted them and said: “Well, if you hate it here so much then why don’t you get back in your boat,” and go back to Mexico.  After two Nurses complained in writing to management about it, one of the Nurses was formally disciplined in writing by management for discussing politics in the workplace.  No disciplinary action was ever taken against the Supervising Nurse who made the comments.  “No tolerance for racism must mean what it says,” said RN Malinda Markowitz, who serves as President of the National Nurses Organizing Committee and is a long-time HCA RN in a statement put out by the Union. “Racist comments provide a chilling and unwelcome atmosphere for nurses, their Co-Workers and the Nursing Students who are our future.”

To Directly Access this Labor News Report, Go To: https://paydayreport.com/nurse-strike-wave-grows-latina-nurses-face-retaliation-for-reporting-racism-houston-nurses-strike/