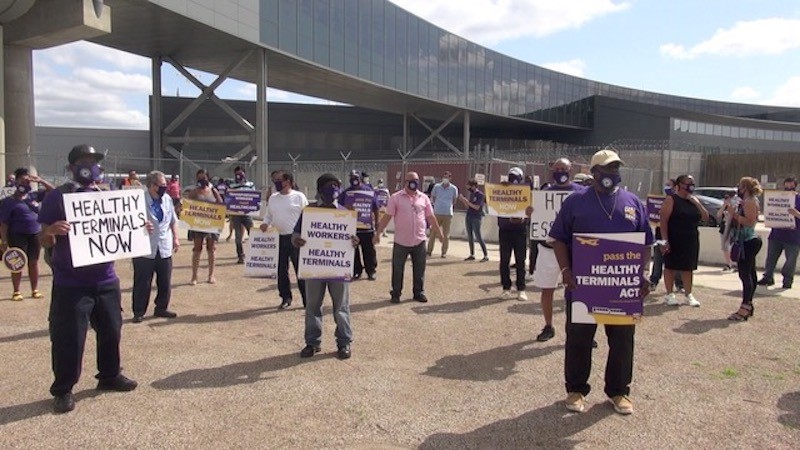 (QUEENS, NEW YORK) - 32BJ Service Employees International Union (SEIU) Members rallied at JFK Airport this week, just in time for an upcoming vote on the Healthy Terminals Act in the New York State Assembly, where it is expected to pass and make its way to the State Senate so that Governor Andrew Cuomo has a chance to sign or veto, by year’s end.

The Legislation is sponsored by Assemblywoman Alicia Hyndman and State Senator Alessandra Biaggi, who participated in the rally at JFK on Thursday (July 16th), where she emphasized that health care is a right, and not a privilege, especially with the ongoing COVID-19 Pandemic.

“After this, it has to go to Governor Andrew Cuomo’s office so that he can sign this bill.  So, to Governor Cuomo, ‘do right by the people of New York.’  ‘If we are New York tough, New York tough Workers deserve health care,’” Hyndman said.

The Legislator also paid tribute to fallen 32BJ Member Leland Jordan, a Baggage Handler at JFK who died in April after contracting the Coronavirus: “When I think about Leland, ‘he worked hard to make sure we passed this Bill, he’s no longer with us.’  ‘And how many members of 32BJ were lost during this pandemic, it tells us that we have a lot more work to do because this is just one step in what’s right and what’s just for Workers in this country.’”

Hyndman was joined by fellow Assemblyman Edward Braunstein of District 26, who said that the Bill’s passage was the right thing to do even before the pandemic struck: “And now, since the pandemic, ‘it’s even more clear how important this legislation is.’  Our Airport Workers ‘are on the frontlines, they are the first people to interact with people coming from all over the world, and it’s critical that you are protected with quality health care.’”

And presumptive winner of the Queens Borough President primary race, Councilman Donovan Richards, said that COVID-19 has laid bare the disparities among Essential Workers: “COVID-19 ‘has shown and how this disease has exacerbated poverty in our communities, we need bills like this to pass, so, you are on the right side of history today.’”

Back on May 21st, 32BJ held a tele-presser where it announced that as many as 20% of New York’s Airport Workers could be uninsured.

Leland Jordan’s daughter, Dazilia Anthony, closed out the rally by saying that she was there to carry on her father’s memory: “I know that my father ‘would want for us to keep fighting for others.’  ‘There are a lot of Airport Workers right now who deserve’ health care, ‘they deserve to have a piece of mind that they can go to the doctor if they get sick without worrying how to pay for it.’”

To Read This Labor News Report In Its Entirety, Go To: http://laborpress.org/covid-19-deaths-loom-over-airport-workers-ongoing-fight-for-healthy-terminals-act/