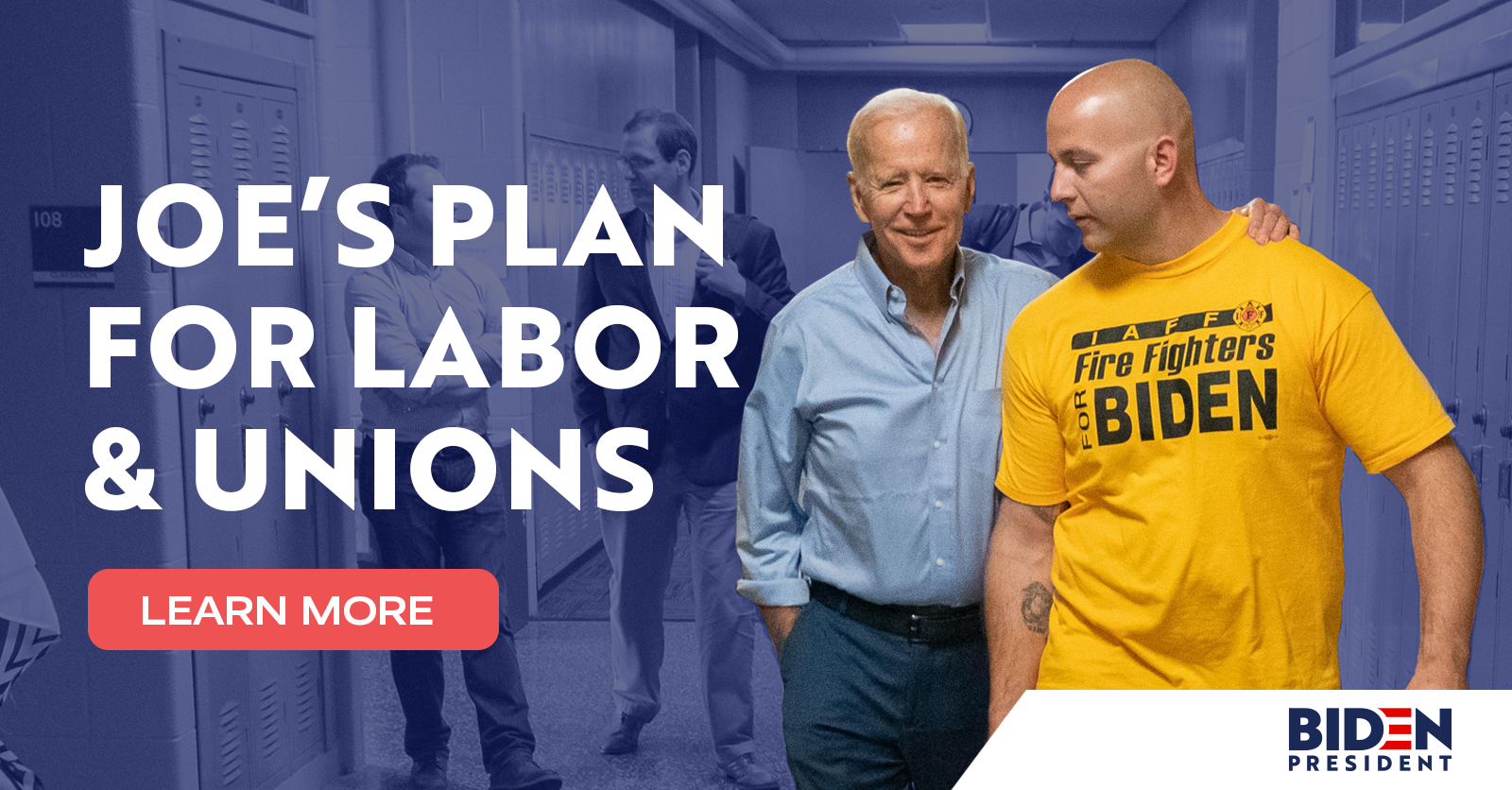 (WASHINGTON, D.C.) – Joe Biden said last week that if he defeats Republican President Donald Trump in the November Election that Labor Unions can count on him to champion their causes and rest assured they will have a seat at the table in the White House.

Speaking to the International Brotherhood of Electrical Workers (IBEW), Biden, the presumptive Democratic Presidential Nominee, said he would move to strengthen the rights of Labor Unions that President Trump and the GOP have tried to strip away.

“We are going to have a breathtaking opportunity to create good-paying Union jobs and deliver the promise of America to Americans who have been denied it for much too long,” Biden told the IBEW, which represents 750,000 Workers across North America.

Biden has longstanding ties to the Labor Movement.

The former Vice President has received endorsements from a long list of those Labor Organizations, including the National AFL-CIO, the IBEW and the American Federation of Teachers (AFT).

Democrats hope his message will resonate with Rank-and-File Union Members who abandoned the Democratic Party in 2016 to cast their support for Trump in several Battleground States.

Biden has advocated for making it easier to Unionize and strengthening Collective Bargaining Rights for Private- and Public-Sector Unions, as well as for increasing workplace safety.

Biden said he would push to “rewrite our economy so that prosperity flows not just to CEOs, but to the Workers who actually built the country.”

“He is out there, not doing a damn thing about the fact that there’s overwhelming evidence that Putin has gone and is paying significant bounties to kill American Soldiers in Afghanistan,” Biden said. “If my son were still alive after having spent a year in Iraq, I don’t know what the hell I would do.”

He also said tens of thousands of American lives could have been saved if the Trump administration had responded in a more appropriate way to the Coronavirus.

“This is a guy who says I am Commander in Chief and then doesn’t command anything in this fight against the COVID-19,” Biden said.

To Read This Labor News Story In Its Entirety, Go To: www.washingtontimes.com/news/2020/jul/8/joe-biden-vows-rewrite-our-economy-unions-and-work/?fbclid=IwAR113Un8nVHnoE02zA3QYRG8tRZShLDhq8jHvva9Yg8bNvz_jIEDoKFaXkw