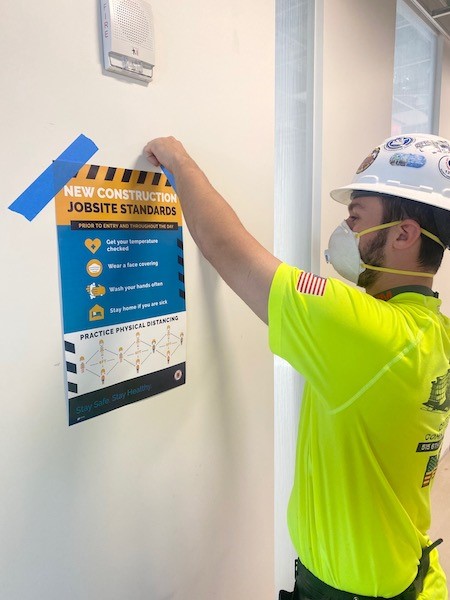 (NEW YORK CITY) - “Construction ‘is a very difficult job to do social distancing on,’” New York City District Council of Carpenters President Paul Capurso tells LaborPress, but as the construction industry recovers from its epidemic-peak nadir, the Union is relying on protective gear and education to keep its Members safe.  Nonetheless, proper social distancing is almost impossible on the job.

Capurso took office in early March, just before the COVID-19 epidemic forced the closing of all but emergency and essential jobs.

Since then, he says, “the jobs ‘have opened up, but because of social distancing, there are fewer people on the job.’”

Capurso estimates the number of Members working is now between 30% and 40%.

The Union reacted to the virus, he says, by buying large amounts of PPE (Personal Protective Equipment), informing Members “what the new normal looks like” - and working with other Building Trades Unions, the Union Contractors of the Building Trades Employers Association (BTEA), and the Real Estate Board of New York developers’ trade group to create standards.

The District Council of Carpenters secured 200,000 masks and other pieces of Personal Protection Equipment for Rank-and-File Members.

Contractors have generally been cooperative, Capurso says, such as by increasing the air circulation on inside jobs, where Workers are more vulnerable to viruses lingering in the air.

Providing protective gear is normally the contractor’s responsibility, but the Carpenters bought up 200,000 N95 and surgical face masks, 75,000 canisters of hand sanitizer, and more than 10,000 pairs of safety goggles, as well as plastic face shields and adapters to fit them onto hard hats.

“We ‘want to make sure that everyone’s working safe.’  ‘We don’t want anybody to be put in harm’s way,” Capurso said.

One obvious bottleneck for social distancing is the hoists and elevators that bring Workers to and from jobs on different floors.

The industry standards include staggering shifts by Trade - where possible, so Workers don’t all arrive and leave at the same time, and urging Workers to bring their own lunch.

But Capurso says it’s still been very difficult to run the lifts at less than half capacity.

Another problem is that there are some tasks, such as pouring concrete, where people have to work less than six feet apart.

Capurso says the Union is relying on protective gear and having the same fixed crew stay together on a job - and not bringing in outsiders.

“If you ‘have to work in pairs, make sure you’re wearing your PPE, and that it’s enforced,’” he says. “I ‘like to think we’re doing a pretty good job of that.’”

To Continue Reading This Labor News Story, Go To: http://laborpress.org/social-distancing-challenges-carpenters-trying-to-work-safe-during-covid-19-crisis/