At The Center Of A Pandemic: IBEW Members In New York City âEndure The Latest Test Of Their Cityâs Resilienceâ 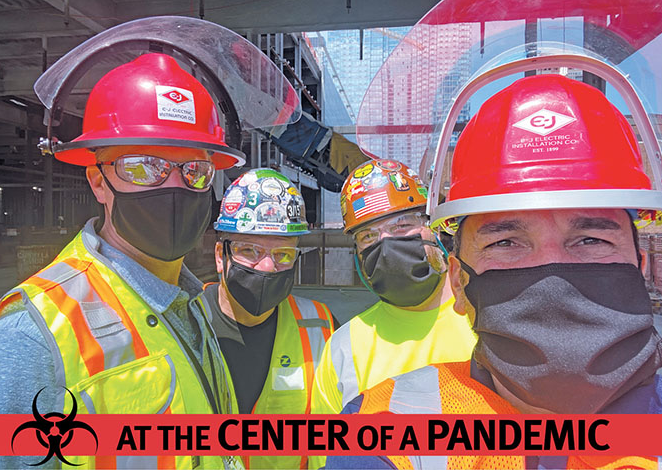 (NEW YORK CITY) - Crises are a calling for the Brothers and Sisters of New York City International Brotherhood of Electrical Workers (IBEW) Local 3.

They were on the front lines when the towers fell, when Hurricane Sandy wreaked destruction, when other states and nations have cried out for help after storms and earthquakes – but nothing prepared them for COVID-19.

By the end of March, the world’s eyes had moved from hotspots in Asia and Europe to the pandemic’s new center: their hometown.

Not even the unspeakable tragedy of 9/11, when Local 3 Members ran toward the pile to aid rescue and recovery, then spent weeks in the toxic air of Ground Zero - rewiring Lower Manhattan.

Splice those nightmares and you get COVID-19.

Sick and dying patients spilling out of emergency rooms.

No one has been left unscathed.

Like the city at large, IBEW Local 3 Members have experienced illness and death, layoffs and furloughs, fear that their job will be next, fear they’ll be exposed to the virus, fear they’ll infect their families.

They’ve had to make hard decisions affecting their lives and livelihoods.

But - as always, they’ve risen to the occasion.

They’ve given generously to charities, staffed food pantries and even helped get urgently needed protective gear to area hospitals.

“We ‘need you to lead by example,’” Erikson, a third-generation Local 3 Leader and the Chairman of the IBEW Executive Council, told IBEW Members in a video message in early April.

He never doubted they would.

By the end of May, more than 80 Members of Local 3 had been hospitalized with Covid-19.

Sean McDonald was one of the survivors, but it took a frightening 11-day hospital stay.

The virus was still creeping into the city when he started coughing.

He was a healthy 44-year-old looking forward to a week’s vacation as he left his jobsite across from Grand Central Station on Friday, March 13th.

By Sunday, he’d quarantined himself in an upstairs room in his Nassau County home, apart from his wife, a Pediatric Nurse, and their four children.

Five days later he was in the hospital.

Isolated, he prayed his family wasn’t infected, prayed that he wouldn’t need a ventilator.

“That ‘was going through my head most of the time,’” said McDonald, a Journeyman Wireman and drummer in Local 3’s Sword of Light Pipe Band.

To Continue Reading This Labor News Story, Go To: www.ibew.org/media-center/Articles/20Daily/2007/200701_PandemicNewYork