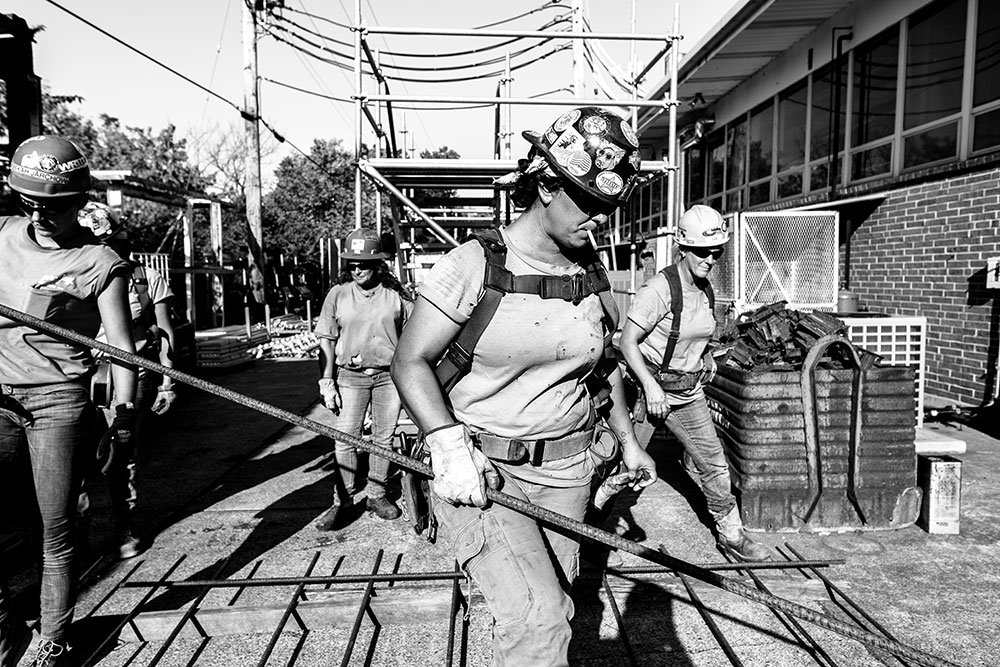 (ST. LOUIS, MISSOURI) - Many Iron Workers adorn their hard hats with stickers, but in St. Louis’ Iron Workers Local 396, there’s one that only the women slap on: the “Iron Maidens.”

These are the “Iron Maidens.”

One of them says the nickname represents “the Sisterhood within the Brotherhood.”

To others, though, being a woman in a male-dominated field is an afterthought.

“I’m a Journeyman. ‘ I don’t say I’m a Journeywoman - to me, that sounds stupid,’” a member explains. “A postman ‘is a postman, even if this one just happens to be a woman.’”

The general consensus: It’s a hard job, regardless, one that comes with rain-or-shine conditions, achy joints and brushes with death.

But oh, the things they can build.

After Tracy Cannovo turned 42, her everyday equipment began to feel extra heavy.  When she started suffering from cramps in her lower abdomen, she figured she’d hurt herself on the job.  Two years later, an ultrasound revealed something else: a five-inch cancerous mass in one of her fallopian tubes, but her physician told her she could continue working.

“My doctor ‘obviously didn’t know what an Iron Worker was.’  I kept telling her to ‘Google it,”’ Cannovo says. “I finally walked in there one day with work clothes on and they’re, like, ‘Holy shit.’  And I go, ‘Yeah, this is what I do, people.’”

She started on this path as a young adult.  While working at her family’s ravioli-making business, she had a boyfriend who wanted to join the Iron Workers and couldn’t.  The Apprenticeship Coordinator encouraged her to apply.

“I ‘don’t have to rely on anybody’ - Mom, Dad, boyfriend, husband – ‘I’m going to go out and I’m going to make some money,’” she recalls thinking.

Cannovo, now 52, isn’t working, since having undergone 25 rounds of chemotherapy: “I’ve been back on a few jobs, but I can’t do it.  Chemo has ‘kicked my ass.’”

She even got a gig as a hairstylist.

But then she followed in her father’s footsteps and signed up to be an Iron Worker.

The choice doubled her salary.

Before the pandemic and annual lack of work in early Spring, she worked on the second phase of Ballpark Village.

To Continue Reading This Labor News Story, Go To: www.stlmag.com/longform/women-iron-workers-st-louis-union-local-396-iron-maidens/#.XwPIk-ISiuZ.linkedin