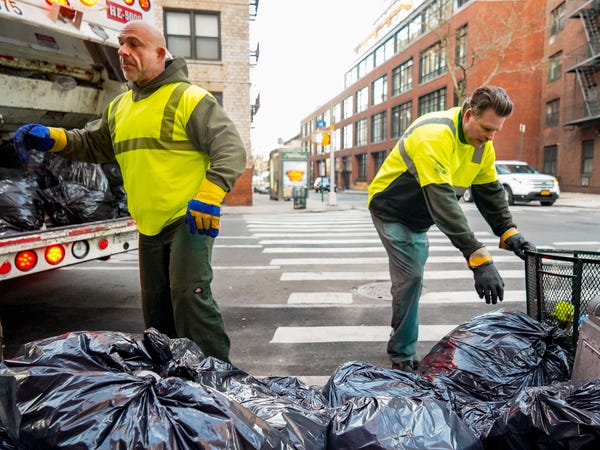 (NEW YORK CITY) - The Coronavirus-austerity budget passed by the City Council on July 1st could result in one out of every 15 City Workers being laid off if labor costs aren’t cut by $1 billion within three months and the Unions representing them aren’t happy about that.

Sanitation Workers and other City Employees, he added, couldn’t work at home.

Trying to address the city’s budgetary issues “on the backs of Labor,” he said in a statement, “is particularly ill-conceived now given that this same Municipal Workforce has continued to work day in and day out during the pandemic at great risk to themselves and their families, with some sadly making the ultimate sacrifice.”

The head of the largest City Workers’ Union had a more favorable attitude.

The budget “reinforces our safety net programs and takes bold steps to strengthen our public health institutions,” he added. “However, ‘what we will not accept’ is the layoffs of (22,000) Municipal Workers, ‘many of whom were deemed essential, and showed up to work every day to help mitigate the effects of the COVID-19 Pandemic.’”

The $88.1 billion budget, passed by a 32-to-17 vote, is $7.2 billion less than the de Blasio Administration projected in February.

City Budget Director Melanie Hartzog told reporters on June 30th that it would reduce the Municipal Workforce, now slightly over 330,000, by about 1,600.

It also freezes hiring - except for public safety and health personnel.

“We’re in a ‘massive’ fiscal crisis, unprecedented since the 1970s,” de Blasio said, as the city has lost an estimated $9 billion in revenue from the pandemic’s economic effects.

Therefore, he added, the budget sets a target of $1 billion in Labor-cost savings, the equivalent of about 22,000 Workers - and if that isn’t met by October 1st, the ax will fall.

“I ‘want to be very clear, we’re going to get to work with our Labor Unions to find that billion dollars,’” the mayor continued. “We’re ‘going to keep working on trying to get that stimulus in Washington, that borrowing authority in Albany.’  ‘But if we cannot find a way, then October First looms as the day we would have to put into effect layoffs.’ “

“It ‘falls on Labor to turn around now and save as many people as we can,’” says Nespoli. “But the city ‘has to be serious about sitting down.’”

Significant layoffs would mean that “the public is ‘cheated out of services it deserves’” and Workers’ morale would be devastated, he adds, recalling how he lost his job in the 1975 fiscal crisis just after he started at the Sanitation Department.

The alternative Nespoli and other Union Leaders recommend is giving Workers incentives to retire early.  That would be the most painless way to reduce Staff, says Robert Croghan, who Chairs the Organization of Staff Analysts, which represents the analysts who evaluate how well city agencies are functioning.

“The ‘way to handle this is to give the ones who want to go the chance to go first,’” he said.

To Continue Reading This Labor News Report, Go To: http://laborpress.org/new-city-budget-could-ax-1-out-every-15-city-workers/