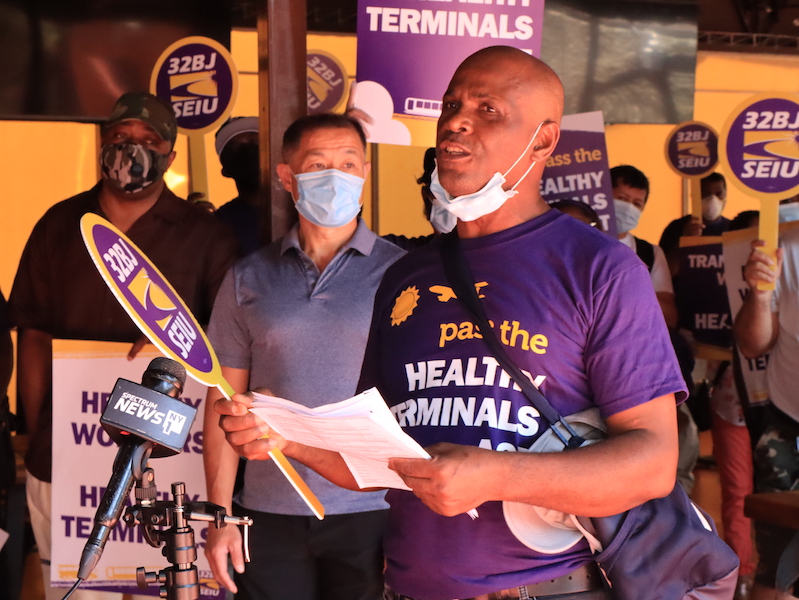 (QUEENS, NEW YORK) – Dozens of Airport Workers who are Members of 32BJ Service Employees International Union (SEIU) participated in a social distancing outdoor rally that was held in the simmering heat at the Katch Astoria Gastropub & Bar in Queens late last week to advocate for the Healthy Terminals Act.

Since the Coronavirus Pandemic hit the United States, the Union has lost more than 130 of its Members, 11 of which were Airport Workers, according to 32BJ SEIU Vice-President Rob Hill.  “We’ve ‘lost a lot of Members’ at 32BJ,” he said.

If the Healthy Terminals were to pass the New York State Legislature, it would provide access to quality and affordable insurance for tens of thousands of Airport Workers, according to the Union.

“Airport Workers ‘are the Front Line Essential Workers in this fight.’  ‘They were hit - as everybody knows when the virus came from Europe through the airports.’  ‘They were the first people hit during the pandemic when nobody knew whether you should be wearing masks or not, or what the protocols were.’  ‘They were hit incredibly hard by this virus, massive layoffs and long before this happened Airport Workers did not have health care,’” Hill said.

Coronavirus is not the first pandemic that Airport Workers have had to face.

“We had Ebola, we had SARS and all these other things, ‘but nobody ever thinks that these Essential Workers, people that we say are so important to us deserve the basics of health care,’” Hill said. “We are ‘also in the moment now that we say Black Lives Matter and Airport Workers are mostly People of Color for the most part and they don’t have health care.’”

Hill doesn’t care for the lip service from corporations and the airlines that say they supposedly care about the Black Lives Matter Movement and police reform, but won’t give their Workers health care: “Why ‘don’t you give your Workers the basics of what they need to do their job?’  ‘We know that the people being affected by this the most are the Essential Workers on the front-line who are Black and Brown People, partly because they are working on the front line without health care and therefore are putting themselves in harm’s way.’”

These Airport Workers cannot treat their pre-existing conditions like other people can without health care - and as a result, they are more at risk to die from the virus, Hill said.

“It’s ‘incredibly unjust’ at seven o’clock ‘to cheer for Health Care Workers, for Airport Workers, the Doormen, the Cleaners, the Delivery People, everybody - but then these big corporations are demanding a billion dollars in bailouts and don’t think (Workers) deserve the basics of health care to do their job on the front lines.’  ‘We know the airlines asked for ($20 billion) and got it,’” Hill said.

The Airline Industry is asking the Federal Government for more bailout money - but it hasn’t included a line item that would take into consideration the health care of 40,000 Airport Workers in the funds that they are requesting, according to Hill.

To Continue Reading This Labor News Story, Go To: http://laborpress.org/nyc-airport-workers-still-without-healthcare-after-massive-industry-bailout/