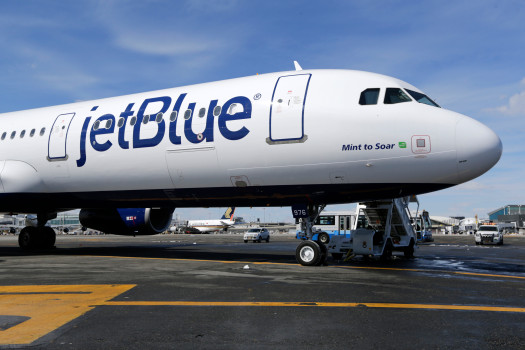 (LONG ISLAND CITY, NEW YORK) - JetBlue Airways and the Labor Union that represents the airline’s Pilots have reached an agreement that avoids involuntary furloughs through April of next year, according to a Union memo sent to Pilots this week.

The JetBlue Chapter of the Air Line Pilots Association voted to approve a letter of agreement that “protects all JetBlue Pilots from involuntary furlough - under any circumstances - until May 1st, 2021,” said the Union memo, which was seen by CNBC.

The agreement comes as pressure is mounting on airlines to slash costs as the COVID-19 Pandemic continues to hurt travel demand.

The JetBlue Pilots’ Union agreed to “short-term changes” with an “earlier snapback if demand for flying recovers,” said the memo, but it was not immediately clear what that entailed.

The memo said there won’t be changes to Collective Bargaining Agreement Pay Rates or “significant modifications” to Work Rules.

“In this environment, this is the highest level of codified Pilot protection in our industry to date,” said the memo.

“Airline Pilots have been on the front lines of this public-health crisis and were part of the first wave of those directly impacted by the associated economic fallout,” the Union said in a statement to CNBC.

Major U.S. passenger airlines accepted $25 billion in Federal aid this Spring that prohibits them from laying off or cutting the pay rates of Workers through September 30th.

Executives have warned they expect to need fewer Employees and say they want to exhaust voluntary measures before turning to layoffs.

American Airlines this week told Employees that it expects to have up to 8,000 Flight Attendants more than it needs this Fall.

The airline had more than 25,000 Flight Attendants as of the end of last year.

To Read This Labor News Story In Its Entirety, Go To: www.cnbc.com/2020/07/01/jetblue-pilots-union-reach-agreement-to-avoid-furloughs-until-may-2021.html