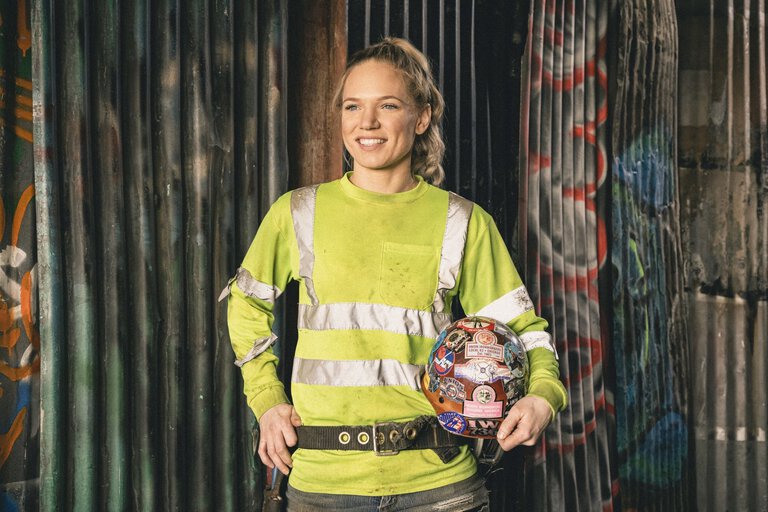 (SEATTLE, WASHINGTON) – Washington State Ironworker Tara Davis wants her participation in the new CBS-TV reality competition Tough as Nails (premiering at 8 p.m. Wednesday, July 8th) to draw attention to Women Ironworkers and to show that a person’s family history does not define his or her future.

Tough as Nails was created and is hosted by Amazing Race star Phil Keoghan, takes 12 Americans “who don’t think twice about getting their hands dirty, in order to keep their country running” - Welder, Farmer, Roofer, Firefighter, etc. - and tasks them with real-world, on-the-job challenges, from working on a railroad or at a sand factory to assembling irrigation equipment.

At the end of the season, one competitor will be named Tough as Nails Champion, winning $200,000 and a pick-up truck.

Davis, 31, of Elk Plain, Pierce County, became an Ironworker in 2018 after 10 years as an Orthodontic Technician.

She’s a Union Member of Seattle’s Ironworkers Union Local 86 and says she’s one of two Women Ironworkers at the company she works for, Rebar International in Edgewood.

Her current work assignment is the Bellevue Tunnel, part of the Sound Transit East Link extension.

Tough as Nails Host Keoghan says as a trailblazer, Davis is a modern-day Rosie the Riveter “who is going to represent something that young women will see as a possibility that maybe they didn’t think was possible if they hadn’t seen her.”

Davis, whose husband is a Structural Ironworker, says she also wants to show that a person’s past is not necessarily predictive of their future.

“In the years I spent in dentistry, you talk to kids and kids tell their Orthodontist’s Assistants a lot,” she says, including teens who say they got in trouble and have no great options in life because of their family background. “I’d tell them, my Dad’s been in prison my entire life, both my parents were addicts.  ‘Just because you came from that, it doesn’t determine who you are.’  ‘It doesn’t define you.’  ‘Nobody else can define you.’  ‘Nobody else can make your future but you.’”

Unlike most reality competitions, “Tough as Nails” does not send a competitor home each week.

After the premiere sets up the season by assembling two teams of competitors, each episode will feature an individual challenge and a team challenge.

One person will be eliminated from the individual challenge weekly, but will stick around for the team challenges, collecting money for each team win.

To Read This Labor News Story In Its Entirety, Go To: www.seattletimes.com/entertainment/tv/washington-state-iron-worker-to-show-her-strengths-on-new-cbs-reality-competition-tough-as-nails/