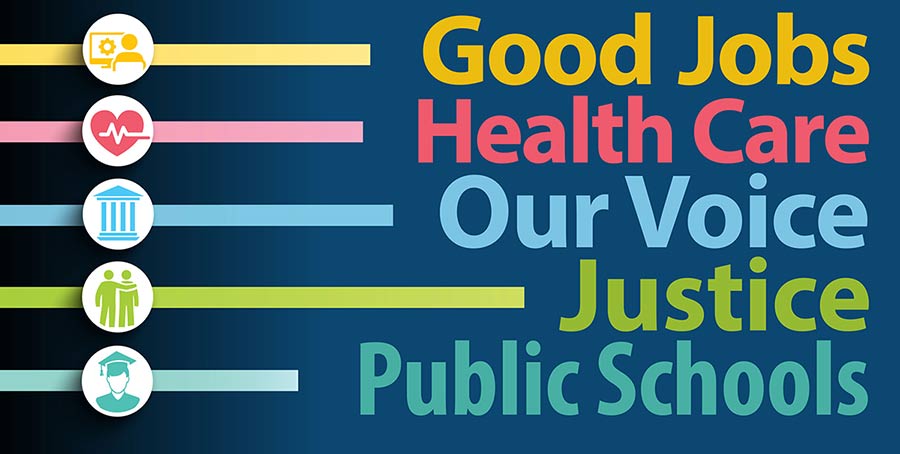 (ALBANY, NEW YORK) - In a forceful and urgent call for action, the New York State United Teachers’ (NYSUT’) Board of Directors has passed a resolution demanding local, state and Federal Policymakers immediately focus on measures to combat education, racial and income inequality - all of which have been laid bare by the COVID-19 Pandemic and worldwide protests in the wake of George Floyd’s murder at the hands of Minneapolis Police.

“As it ‘always has,’ NYSUT ‘will lead in this effort to fight inequality on every front,’” NYSUT President Andy Pallotta said. “But as our Union ‘leads this battle, it must be understood this is a fight that is urgent and requires everyone - especially those who set policy and law - to dismantle the system that enables these inequalities to exist and replace it with a society that ensures and provides equal opportunity to all.’”

Noting that the COVID-19 Pandemic hit the Nation’s most vulnerable populations with disproportionate rates of illness and death, and highlighting the injustices perpetrated daily across the country against People of Color, as well as the chronic underfunding of schools, universities and hospitals, NYSUT’s Board Resolution said “extreme wealth and income inequality are America's pre-existing condition” that must be addressed - immediately.

“As a Union, ‘we understand our responsibility, our power and our privilege at this moment to do everything we can to set us on a new course in this country, knowing that now is the time to stand together for justice in New York and across the Nation,’” the NYSUT Board said.

Since January, NYSUT has been crossing the state demanding New York’s Public School System be funded at appropriate levels.

“NYSUT,” the resolution said, “will not be silent on issues of poverty, racism, discrimination, and injustice that have plagued our society.  Together we fight for justice in New York and our Nation.”

As part of its continuing effort to reverse the disturbing trend of educational and income inequality, NYSUT also has advocated at the state Capitol for a series of proposals that would raise billions of dollars by closing loopholes that benefit the wealthiest New Yorkers and requiring the state’s billionaires and ultra-millionaires to pay a fairer share of taxes.

To Directly Access This Labor News Report & NYSUT’s Board Resolution, Go To: www.nysut.org/news/2020/june/runaway-inequality