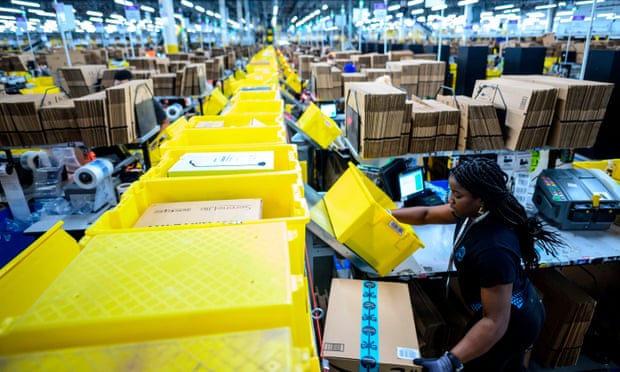 Amid a backlash over warehouse safety, Amazon is facing a growing likelihood that U.S. Workers will eventually Unionize.

Despite substantial investments in a COVID-19 response, which Amazon announced in its first quarter earnings release, reports of Worker infections and deaths have shone an unflattering spotlight on Amazon's Labor Practices.

Amazon told investors that it would plow as much as $4 billion into its overall COVID-19 response efforts, a figure that included hundreds of millions of dollars on a testing system for Front-Line Warehouse Workers.

But if Worker infections continue, Amazon will face a "tremendous uproar" from politicians, Forte added.

And that uproar could also intensify if Joe Biden, a Democrat generally friendly to Organized Labor, wins the White House this Fall.

As part of the investigation, James is also looking into whether Amazon illegally retaliated against a former worker, Christian Smalls, who was fired after organizing a walkout.

Amazon has said it has instituted thorough safety measures in its warehouses, including Personal Protective Equipment (PPE), social distancing measures and testing systems in the facilities.

And it recently invited journalists to tour its facilities as part of a media blitz related to Worker safety.

However, with several U.S. States reporting sharp increases in COVID-19 cases, it may be inevitable that new cases affecting Amazon's warehouse Workers will emerge.

At least eight Amazon Workers have died of COVID-19, according to reports, and a coalition of state attorneys general asked the company last month for a state-by-state breakdown of Worker infections.

In recent days the Minnesota Department of Health reported that 187 Amazon Workers had tested positive for COVID-19 in the state.

The current focus on Amazon's Labor Practices highlight an innate liability in its business model: It relies heavily on human Workers, despite longer-term efforts to introduce more automation in its warehouses.

If Amazon Workers Unionize, it would present a "material inflation on Labor costs," Forte added.

A Union in the U.S. would likely translate into a pay increase and improved benefits for Fulfillment Center Workers.

To Read This Labor News Story In Its Entirety, Go To: www.thestreet.com/investing/amazon-cant-avoid-unionization-says-analyst?fbclid=IwAR3F8tc6wmUlXtrYa1cb_g0vAArFNpOJu4Cng6VboZLUFqcazmDrrjXlOME