A Mural âFor The Times, Brought To You In Part Byâ AFSCME Members 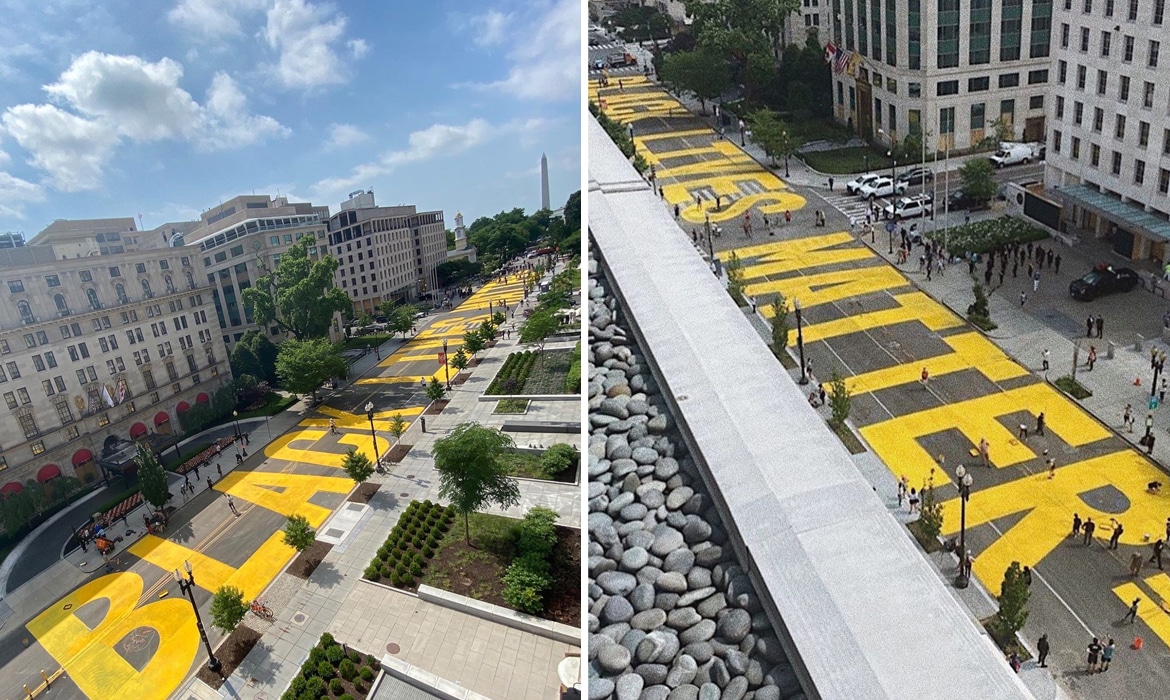 (WASHINGTON, D.C.) - It was the most visible affirmation of the sentiment sweeping the Nation - Black Lives Matter - and a defiant response to Republican President Donald Trump’s controversy-laden photo op taken earlier this month in front of the historic St. John’s Episcopal Church - and American Federation of State, County & Municipal Employees (AFSCME) Members helped make them happen.

In response to the protests across the Nation that were sparked by George Floyd’s killing and Trump’s June 1st photo op, for which peaceful protesters close to the White House were dispersed using force and tear gas - Washington, D.C., Mayor Muriel Bowser ordered 16th Street, leading to the White House, to be painted with a giant street mural reading: Black Lives Matter.  And she also renamed the corner of 16th and H Streets - the site where the protesters were dispersed - Black Lives Matter Plaza.

The street mural was painted in part by Members of the city’s Department of General Services - Workers represented by AFSCME District Council 20.

"I’m ‘very proud’ of our city and our Members ‘once again leading the national conversation,’” said District Council 20 Executive Director Andrew Washington. “Everything ‘we do right now is critical in standing up for economic and social justice.’”

Bowser’s choices were meant to make a statement - a statement that is now trending nationally and being replicated in cities across the U.S.

“We ‘do have to remember that this is a national moment in more ways than one,’” Washington said. “Our Members ‘are out here every day ensuring that our communities continue running safely and smoothly.’  ‘We’re out here driving the busses, cleaning the buildings, collecting the garbage and maintaining the safety of everyone.’”

The mural comes at a time when protests and rallies continue across the U.S. - many organized by AFSCME Members themselves.

For AFSCME Members, the fight for economic and social justice are tightly interconnected - a connection even more apparent with the COVID-19 Pandemic bringing economic and racial disparities to light.

To Directly Access This Labor News Story, Go To: www.afscme.org/blog/a-mural-for-the-times-brought-to-you-in-part-by-afscme-members?fbclid=IwAR2tTM4TcgSbUG44Of_5Ar7AeEvjBmwBnjGDxwyMQXXiHn6qldWPyFu02FY