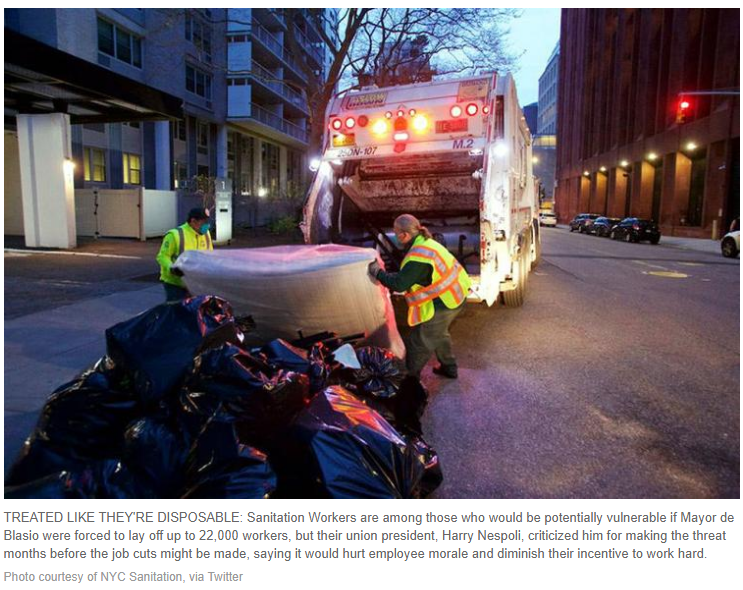 (NEW YORK CITY) - Mayor de Blasio warned this week that without $1 billion in concessions from City Unions, he would have no choice but to lay off or furlough 22,000 Workers.  Meanwhile, top Union Officials reacted angrily to his announcement, saying they got virtually no notice before he revealed that worst-case scenario.

Union Leaders, noting that the job cuts would not come until the Fall, accused the Mayor of prematurely stirring fear among their Members without first consulting them, and said it would have a negative effect on morale.

Municipal Labor Committee Chairman Harry Nespoli, who’s talking with city officials about possible savings, said he wasn't notified of the doomsday warning until an hour before Mayor de Blasio issued it during his morning briefing of the media.

"I'm ‘gonna say it nice: to me it's very bad planning,’" said Nespoli, who is also President of the Uniformed Sanitationmen's Association.

He said the late notice he received about the threat meant that in many cases, "I couldn't get word to the other Unions," adding that many Rank-and-File Workers were shaken by the announcement.

Referring to Republican President Donald Trump, he added: "This guy in Washington ‘does not like New York or the people of New York.’  ‘He's doing nothing to help us.’"

But he questioned what the Mayor hoped to accomplish in accentuating a potential need for layoffs that wouldn't take effect for months, particularly at a time when Unions were already negotiating on possible relief for the city.

Noting that he had been laid off as a Sanitation Worker during the fiscal crisis 45 years ago, soon after he bought a house, Nespoli said: "If you're a Worker and you're hearing about layoffs, ‘what's your incentive to come to work and continue to work hard the way you have been all during this virus?’  ‘Why do you want people thinking about layoffs?’  ‘When that's on your mind, you have a hesitancy that you're going to come into work and hear your name called.’"

He continued: "When I got laid off, I saw it on the (Sanitation Department) teletype.  ‘It kinda rips the guts out of you.’"

He said in a statement: "There's a 'thank you for your service' during the pandemic, a layoff notice for thousands of City Workers who created an unparalleled virtual education program, staffed the clinics, drove the ambulances and kept other city services going."

The Mayor and the City Council have just a few days before the July 1st deadline for reaching a budget for the coming fiscal year, and the lack of imminent relief from Washington or approval from the state for the city to borrow money for the short term added to the sense of urgency.

To Continue Reading This Labor News Report, Go To: https://thechiefleader.com/news/news_of_the_week/mayor-threatens-huge-layoffs-unions-blast-him-for-stoking-fears/article_b038a528-b719-11ea-8e41-abae90ab0a0a.html?utm_medium=social&utm_source=facebook&utm_campaign=user-share&fbclid=IwAR0mRkrSEjlWPhmTgY1dyR8LNSxdN_adCDqo_OwmZHQo5uJC1QtXRa95FU4