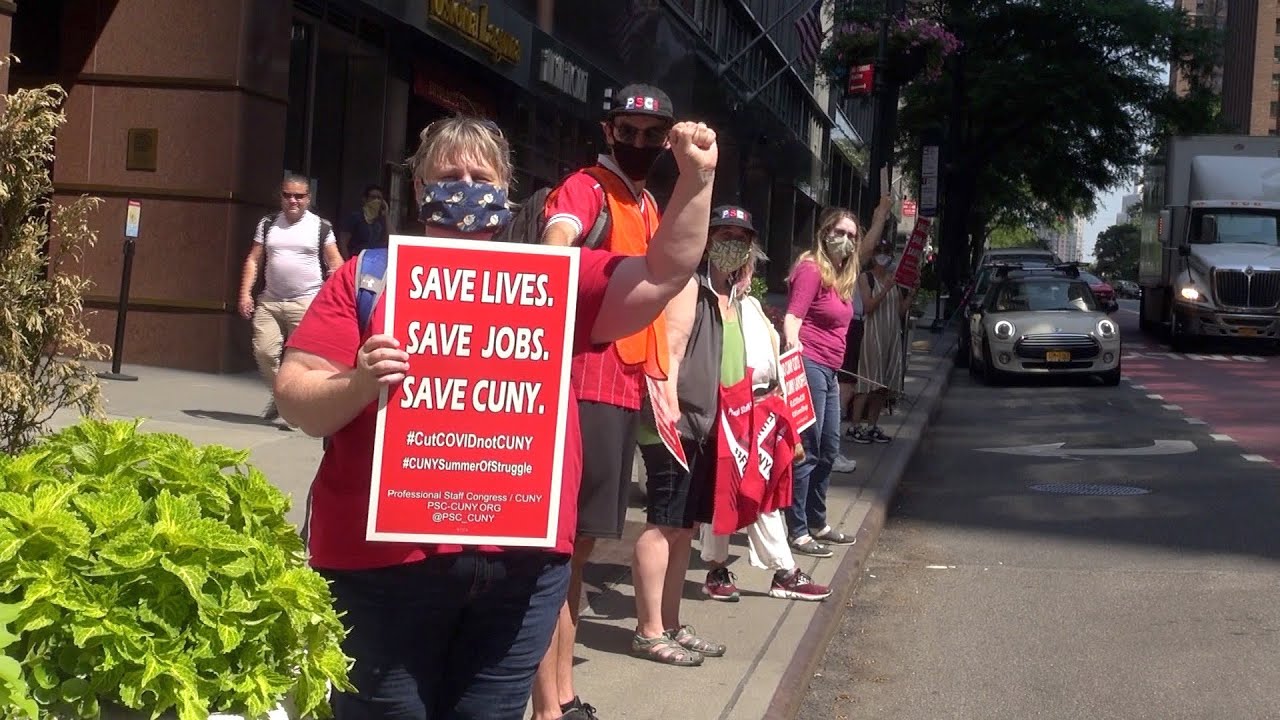 This is the second time in recent weeks PSC Members have taken to the streets despite the COVID-19 Pandemic to demonstrate their strong opposition to CUNY’s proposed budgetary cuts in the wake of the Coronavirus recession.

And they’ll be continuing their demonstration with a march and rally on Saturday (June 27th), from Brooklyn Borough Hall to City Hall.

The Union’s President, Barbara Bowen, who participated in the socially distanced chain to protest against cuts and layoffs, noted that next week, June 30th, is the deadline for the CUNY Board of Trustees to notify Part-Time Faculty and Staff about whether they will have an appointment next term: “We have (12,000) part-timers, who are the majority of the teaching force, and they are going to hear on Tuesday whether they will have jobs in the Fall or not.”

Bowen emphasized that there has to be an alternative to the plan to lay off Adjuncts, who’ll be at jeopardy of losing their health care coverage” “The CUNY Administration and the governor’s office, and the city and the federal government ‘should be standing up and investing in exactly the institutions that serve the communities that have been hardest hit by COVID-19, the Communities of Color that are crying out for justice - this is an opportunity to do it and they have to do it now.’”

The onset of the economic recession due to the Coronavirus has left no business sector in the city untouched, including higher education - but even before COVID-19 hit New York, CUNY was already experiencing a decline in state aid.

Indeed, since 2011, state aid to CUNY, adjusted for inflation, declined by 5%, while tuition has risen from $5,130 to $6,930 for a full-time student at a four-year CUNY School, according to The Nation.

That’s why the New York City Public Advocate, Jumaane Williams, has proposed a number of recommendations to shore up CUNY’s funding.

For example, he’s recommending an increase in funding from both the state and city.

For Fiscal Year 2020, the State should provide CUNY with its requested $137.7 million and the City should provide an additional $108.2 million to ensure it can cover mandatory cost increases and finance strategic investments, according to The Public Advocate.

And the Federal Government should strengthen and expand the Pell Grant Program in order to ensure a key source of tuition funding for CUNY students.

While Bowen believes more money can be generated from state revenues in the form of higher taxation for very wealthy New Yorkers - those earning $1 million or more in income annually, the U.S. Senate should be passing the fourth round of stimulus funding that the U.S. House has already passed.

To Continue Reading This Labor News Story, Go To: http://laborpress.org/cuny-union-forms-human-chain-to-shield-adjuncts-from-mass-layoffs/