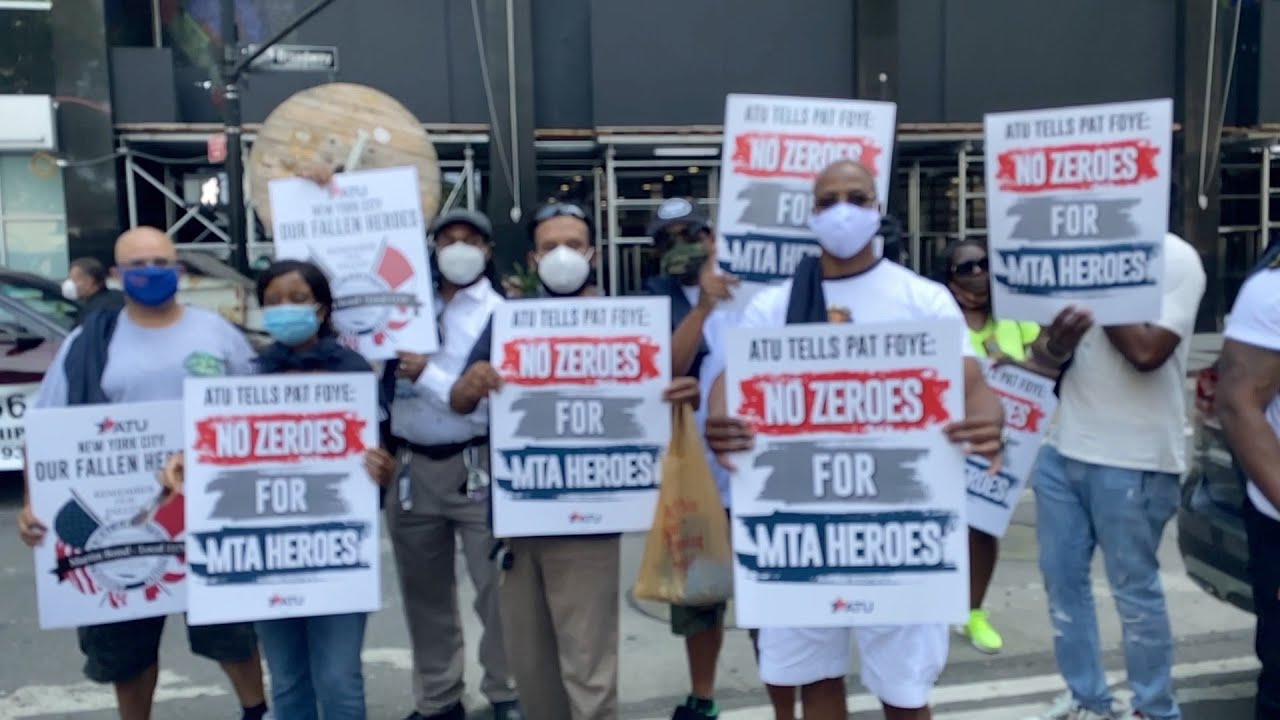 (NEW YORK CITY) - Hundreds of Amalgamated Transit Union (ATU) Members rallied in front of the Metropolitan Transportation Authority (MTA) Headquarters Wednesday (June 24th) because they’ve been working without a contract since May 2019 - even though the Union that represents the largest number of Employees at New York City Transit, Transit Workers Union (TWU) Local 100, negotiated a new contract in December 2019.

According to ATU Local 726 President Danny Casella, numerous ATU Locals are seeking the same type of contract that TWU Local 100 negotiated - no more, no less: “We’re here to ask (MTA Chairman) Pat Foye ‘why is he treating us different than (the) TWU.’  They have a contract that they negotiated in December and now the MTA ‘doesn’t want to negotiate with any of the ATU Unions or any other Unions in the Transit Authority, which is (26) of them.’  ‘We want the same exact thing that the TWU got and we also want Hazard Pay that our Members deserve.’”

According to Casella, ATU represents some of the same job titles as TWU Local 100 represents at the MTA, such as Mechanics, Cleaners, Maintenance Department and Operators who drive buses for New York City Transit.

As to why the MTA doesn’t want to negotiate with the ATU, Casella said that the state agency is using the COVID-19 pandemic as an excuse: “A lot of businesses ‘are doing that, they’re trying to steal people’s pensions, steal their benefits and steal their wages.’”

Raymond Greaves, who was appointed ATU International Vice President in December 2019, was at the bargaining table just last month, where the MTA leadership was mum about negotiating a new contract: “It’s ‘a lot of crickets.’  They came to the table and I was there with the four Locals here in New York City ‘and they couldn’t put anything on the table.’  ‘They wouldn’t discuss money, even though they just got stimulus money, over ($3 billion) to the MTA and they want to give us zeros.’  ‘To tell us they have nothing for us now,’ after TWU got a contract back in December, ‘is a slap in the face.’  ‘Through this whole pandemic we were heroes, and now they are treating us like zeroes.’”

The MTA received $3.8 billion in stimulus funding from the CARES (Coronavirus Aid, Relief, and Economic Security) Act back in March, but just two days ago during an appearance on Bloomberg Television, the MTA’s Foye said the agency will run out of money in August if the U.S. Senate does not approve an additional round of economic stimulus that would provide another $3.9 billion.

The Democrat-controlled House passed the HEROES (Health and Economic Recovery Omnibus Emergency Solutions) Act on May 15th, a $3 trillion measure that would provide about $1 trillion to state and local governments to offset continuing economic hardship caused by the Coronavirus Pandemic.

But the Republican-controlled Senate has vowed to block it because they say that the government has already spent more than $6 trillion and they want to take a wait-and-see approach to see how the money already spent improves the economy.

To Continue Reading This Labor News Report, Go To: http://laborpress.org/no-zeros-for-heroes-mta-contract-stance-is-a-slap-in-the-face-to-atu-workers-on-the-front-lines-of-the-covid-19-pandemic/