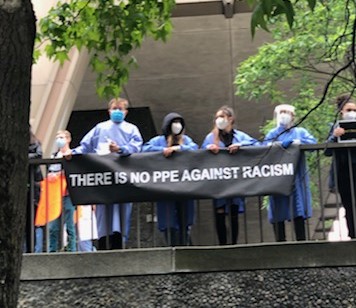 The killing of George Floyd by a Minneapolis Police Officer in May has sparked outrage and mass protests all over the world.

In cities across America, protesters are calling for racial justice and drastic reform within police departments.

The rallying cry, “Black Lives Matter,” has garnered widespread support within the Labor Movement and in the American Federation of State, County & Municipal Employees (AFSCME) in particular, which has a legacy of fighting for Racial and Economic Equality for marginalized communities.

The protests continue as the killings of African Americans keep recurring - for instance, Rayshard Brooks was fatally shot by an Atlanta Police Officer this month.

During the recent Juneteenth celebrations, here’s a look at what some AFSCME Affiliates did to demand racial justice and policing reforms:

In Florida, Members of AFSCME Local 1328 and Local 1781 at University of Florida Health Jacksonville knelt in solidarity with Floyd and others and joined calls to end police brutality in their communities.  "As the largest Public Sector Union in the State of Florida - representing more than 100,000 Front Line Workers, ‘we know that an injustice anywhere is a threat to justice everywhere,’” said AFSCME Florida President Vicki Hall. “We ‘cannot continue to allow the callous disregard for the lives, Labor, health and safety of Communities of Color.’  ‘We stand in solidarity with all those in the streets peacefully seeking justice for George Floyd and all victims of police brutality and racial injustice everywhere.’”

The United Nurses Associations of California (UNAC) held a similar virtual event, where attendees were encouraged to show solidarity for justice and equality by kneeling and taking the time to reflect and recognize victims of police brutality and violence.  UNAC also moved to create a list of racial justice resources on its website.

Public Defenders and Members of AFSCME Council 8 in Ohio organized protests in support of Black Lives Matter and, this month, AFSCME Maryland took to the streets and organized car caravans to decry the poor leadership exhibited by Governor Larry Hogan in the wake of Coronavirus and to honor George Floyd’s life.

AFSCME President Lee Saunders participated in one of those caravans in early June and praised Public Service Workers who are on the front lines of the COVID-19 Pandemic, while also speaking out about the urgent need for racial justice: “We will ‘not rest until our leaders answer our calls for Racial Justice,’” Saunders said. “Once again, ‘we’re being presented with a false choice, which our Union has always categorically rejected: the idea that public safety is incompatible with basic Civil Rights.’  ‘The truth is: a healthy society can and must have both.’”

AFSCME Members were also among the more than 1,000 Members who took part in a Worker-led caravan organized last week by Labor Unions in Washington, D.C.

Similar caravans were held throughout the Nation.

To Continue Reading This Labor News Story, Go To: www.afscme.org/blog/afscme-members-nationwide-reaffirm-that-black-lives-matter?utm_content=buffer24422&utm_medium=social&utm_source=twitter.com&utm_campaign=buffer&fbclid=IwAR0eCwkn21wLGWVmmw_9861qYDYWzuR7S3GZC3UC0N_aqASoFFkjKriW0Qk