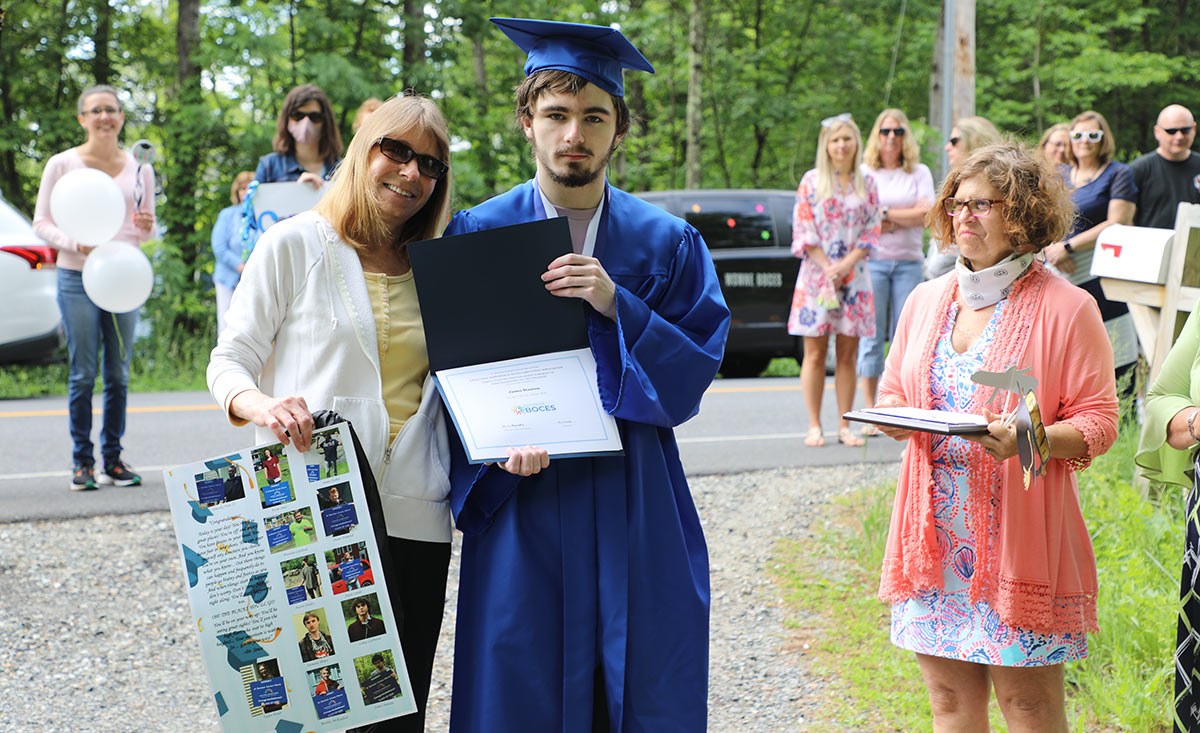 (FORT EDWARD, NEW YORK) - With the bright June sun as their guide, a caravan of Educators traveled 300 miles past corn fields, farms, rolling hills, rivers and dusty roads to connect with the waiting, happy faces of this year’s crop of graduating seniors.

The first stop for the entourage from the Washington-Saratoga-Warren-Hamilton-Essex Board of Cooperative Educational Services (BOCES) was at the home of graduate James Stanton, who was greeted not only by Educators, but also by police officers and firefighters rolling their red lights up the road as part of the welcome.

Like his classmates, he was given a cap and gown to wear and presented with his diploma.

The Saratoga Adirondack BOCES Employees Association, which allocates $5,000 each year for scholarships, presented Stanton with a cash gift, as the Union did for seniors in other WSWHE BOCES locations who graduated.

Each senior was also given a personalized “swag bag” made by teaching assistant Loretta LaPointe - filled with homemade treats and coupons.

Teachers and Aides spoke about Stanton’s many accomplishments.

“James is such a great writer.  He loves to write about artificial intelligence.  He is great at graphic design,” Teacher Georgianna Bull said.

“I’ve always looked for positive role models for my son,” said Esther Stanton. “Scott is amazing. He was our blessing.”

During the pandemic shutdown, she said Palmer talked with her son every morning after sitting in on Google Meets with Teachers to learn what Stanton’s assignments were.

Then he would help the senior work through them.

In rural Cambridge, traveling past low mountains and acres of sun-splashed fields, Teachers met with Austin Dailey and his family.

Senior Timothy Finn III, who lives in Greenwich, said his favorite class was English, and his eyes lit up when he realized Mrs. Bull, his English Teacher, was outside his home.

Finn had poems published in the school’s newsletter, along with short stories and drawings.

He played the part of Reverend Samuel Parris in reading “The Crucible” out loud in class and outside his home, Teachers reminded him of his wonderful rendition and accents while enacting the part of the Puritan Minister and his role in the Salem Witch Trials.

“I have a senior at home who graduated Monday, so I know first-hand how hard it is for them to be separated from their friends, and how important it is to celebrate this,” BOCES Science Teacher Darcy Pietropaolo said.

To Continue Reading This Labor News Story, Go To: www.nysut.org/news/2020/june/boces-graduation