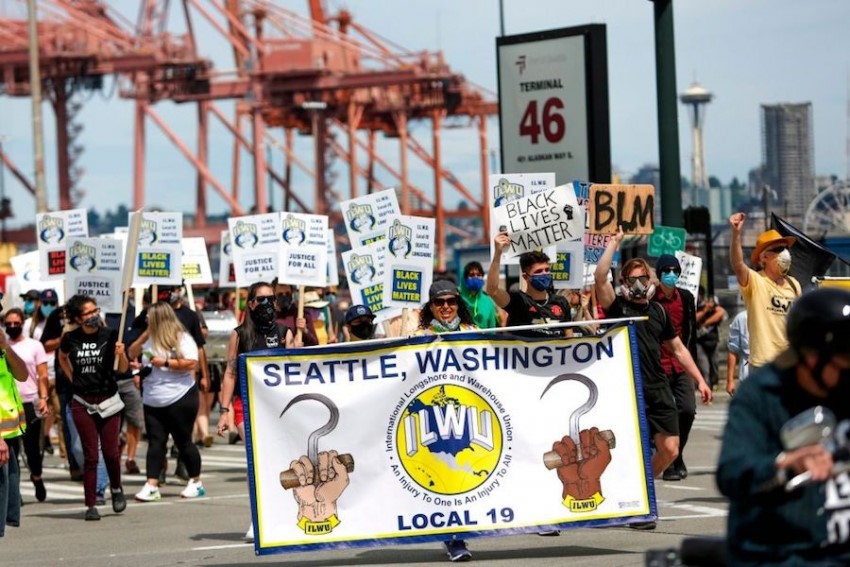 (BROOKLYN, NEW YORK) - The enormous white stone arch in Brooklyn’s Grand Army Plaza is a memorial to the Union’s victory in the Civil War.  While Confederate monuments are toppling across the country, but the arch is only getting more popular.

At 11:30 on a hot Juneteenth morning, Kyle Bragg stands in its shade, wearing a red T-shirt, a New York Knicks-branded face mask, and a purple hat with the logo of 32BJ Service Employees International Union (SEIU), the 175,000-member Union that he leads.

“My son is (25), and my daughter is (29).  ‘I worry every single time they’re out of the house,’” says Bragg, a Black man who has spent decades as a Labor Leader. “The ‘most important conversation I had with them when they were young was not about sex or drugs.’  ‘It was about how to deal with the police.’”

The uprisings that have swept America this month are spontaneous, massive and often leaderless, and the structured world of Unions initially seemed puzzled as to how to react.

The burning of the National AFL-CIO’s headquarters in Washington, D.C. in the early days of the protests was symbolic of the disconnect between Organized Labor and the streets.

But as the days went by, Organized Labor rallied to the cause.

In the week leading up to Juneteenth, the June 19th holiday commemorating the end of slavery, it seemed Unions had found their voice.

The National AFL-CIO’s headquarters, boarded up but newly festooned with “Black Lives Matter” banners, became a staging ground for marches and rallies.

And the National Labor Federation organized a set of coordinated Workers First Caravan, event that were held across the country on Wednesday, June 17th, with Union Members driving around in vehicles covered in signs demanding racial and economic justice.

It was not quite the socialist dream of melding Labor’s Class War with the movement for racial justice into one big, huge, perfect revolution, but it was something.

It was an effort by Organized Labor to publicly tie its fate to that of the people marching in the streets, many of whom have no connection to Unions.

It was a start.

To Continue Reading This Labor News Story, Go To: https://inthesetimes.com/working/entry/22614/celebrating_juneteenth_labor_finds_its_voice_for_racial_justice1