32BJ SEIU President Kyle Bragg On Juneteenth: We Have To Agitate And Take To The Streets! 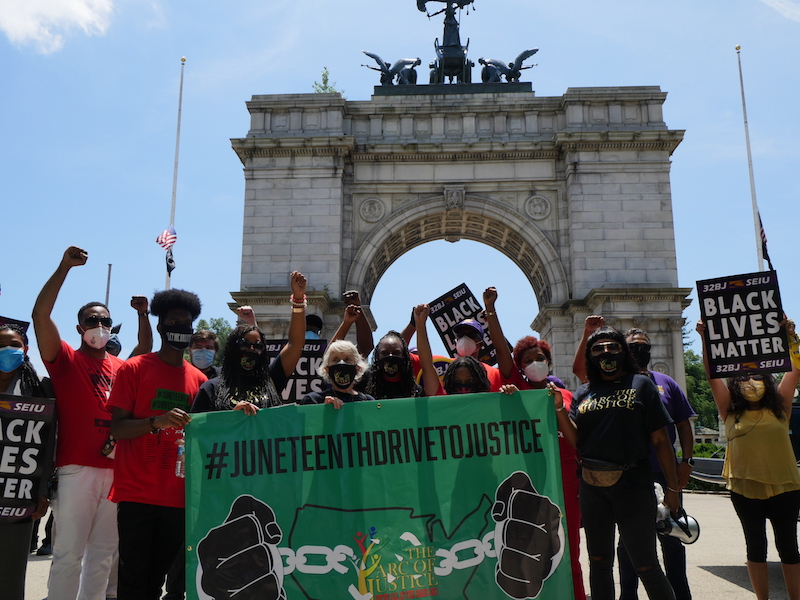 (BROOKLYN, NEW YORK) - Labor Unions - if they aren’t already in the streets following the police killings of George Floyd, Breonna Taylor and so many other unarmed People of Color, need to stand with Community Activists who are confronting police brutality and “bringing the heat for change in this country.”

“I ‘can’t explain to someone white what it feels like to have the lights of a police car come up behind you’ - ‘the anxiety overcomes you,’” Bragg told LaborPress.

That fear, dread and panic grew so acute earlier this month, during protests in response to Floyd’s killing and Mayor Bill de Blasio’s ensuing night-time curfews, that Working Men and Women - many of them routinely lauded as “Essential Workers” during the ongoing COVID-19 Pandemic, started carrying letters from the Union and some employers explaining to any cop they might encounter what they doing on the streets of New York City.

This week’s Juneteenth Drive to Justice motorcade, traveling from the triumphant Soldiers’ and Sailors’ Arch in Brooklyn and passing City Hall on its way to the Adam Clayton Powell, Jr. State Office Building in Harlem, coincided with similar actions in 33 other cities across the Nation aimed at defunding and demilitarizing the police.

“This is a ‘moment where Labor has to respond,’” Bragg told LaborPress. “We ‘have to have a voice - it’s our responsibility not to be silent.’  Our Members ‘need to have equity in their communities.’  ‘They can’t be under tyranny in their communities and be expected to come in and perform at work.’”

Vladimir Clairjeune, a 32-year-old passenger service representative at JFK Airport, said this week, that the current moment calls for Organized Labor to be “on the right side of history.”

“For ‘too long,’ Black men, women and children ‘have been murdered,”’ the Hillside, Queens resident told LaborPress. “If (Labor Unions) ‘are not already supporting this movement, I hope that they become supporters.’”

To Continue Reading This Labor News Story, Go To: http://laborpress.org/32bj-president-kyle-bragg-on-juneteenth-we-have-to-agitate-and-take-to-the-streets/