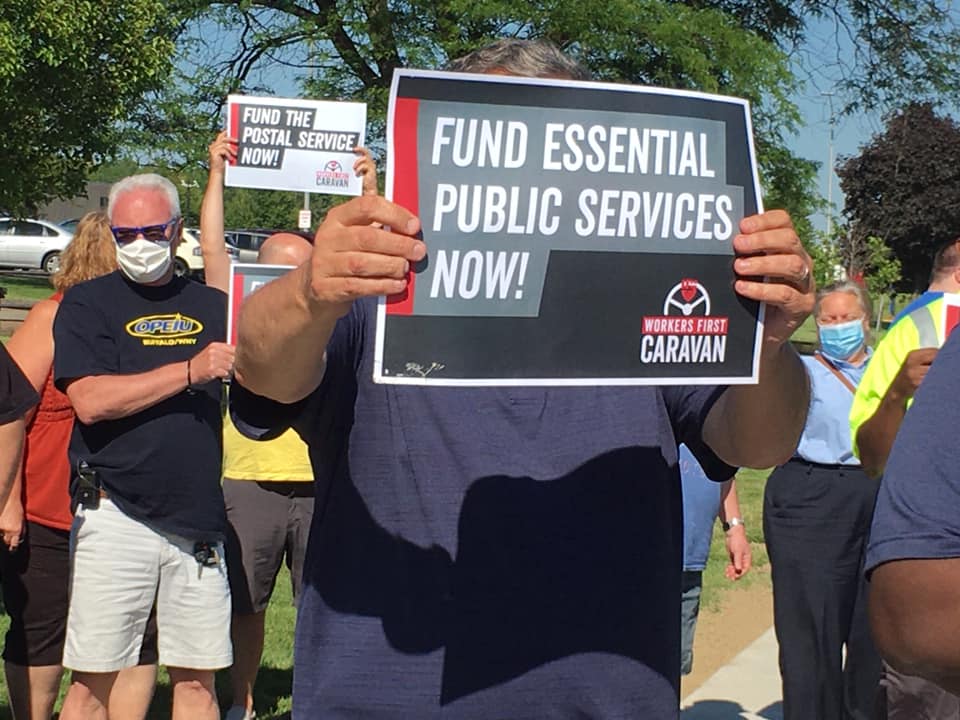 (BUFFALO, NEW YORK) – About 100 vehicles driven by Members belonging to an array of Buffalo area Unions took part in a National AFL-CIO-sanctioned and countrywide Workers First Caravan on Wednesday (June 18th) in order to focus public attention on the need to pass the HEROES Act, as well as supporting Front Line Essential Workers with appropriate pay and Personal Protective Equipment (PPE), and providing federal funding to keep the United States Postal Service (USPS) up and running.

Gathering outside of the Williams Street Post Office after driving through the streets of Buffalo, the Unionists held a rally (WNYLaborToday.com Photos) and news conference to reiterate the need for support for all Workers in having a safe space in the workplace, recognizing the sacrifices and essential contributions from Front Line Workers - including Postal Workers, Transportation and Health Care Workers, in helping to stabilize our communities during the continuing Coronavirus crisis. 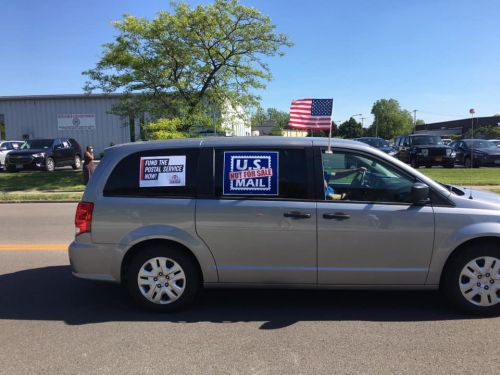 “We are ‘also here to demonstrate the unhappiness’ of African Americans over public brutality and racism,” Western New York AFL-CIO Area Labor Federation (WNYALF) President Richard Lipsitz (Pictured Below) told those attending the rally.  “It is ‘important we stick together through the end of all of this - leading to the defeat’ (of Republican President Donald) Trump and the Republican Congress (in this November’s Election).” 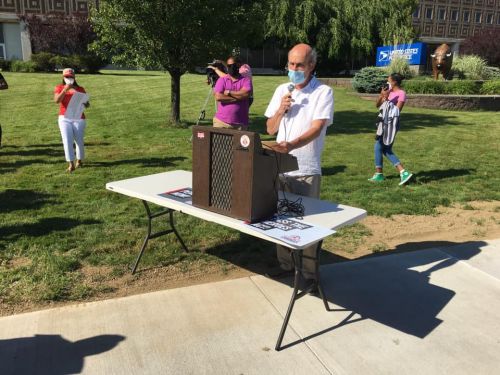 The National AFL-CIO is supporting what it calls Five Economic Essentials and is asking Unions and their Members to personally tell their U.S. Senators to: Keep Front Line Workers safe and secure; Keep Workers employed and protect earned pension checks; Keep state and local governments, our public schools and the USPS solvent and working; Keep America healthy - protect and expand health insurance for all Workers; and Keep America competitive - hire Americans to build needed infrastructure across the country. 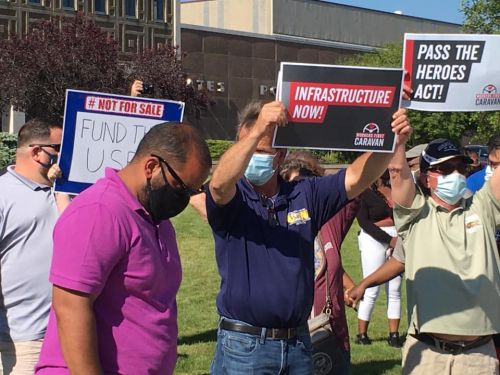 In addition, support was asked for the HEROES (Health and Economic Recovery Omnibus Emergency Solutions) Act - proposed legislation passed by the House of Representatives that would spend $3 trillion in response to the COVID-19 Pandemic.  The legislation promises a second stimulus check, debt relief, student loan forgiveness, hazard pay, six more months of COVID-19 unemployment, housing and food assistance, and nearly $1 trillion in aid for state and local governments so they can pay “vital Workers such as First Responders, Health Workers and Teachers” who are at risk of losing their jobs due to budget shortfalls.

“This is a ‘Bill of Rights for Essential Workers.’  ‘It’s a long list’ and we ‘want’ the Senate to pass this,” said Lipsitz, who urged all to telephone 20 U.S. Senators pinpointed by the National AFL-CIO who, if convinced, would get the HEROES Act passed. 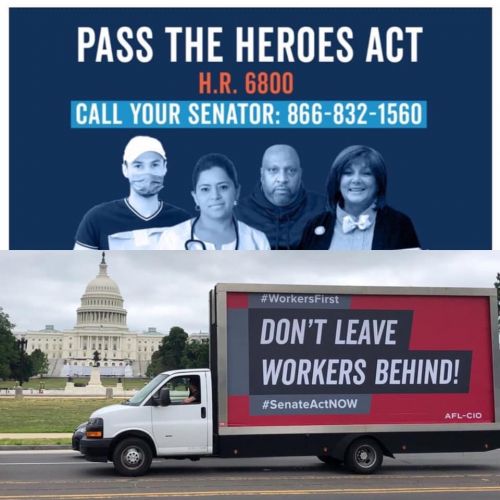 Four speakers addressed those at the rally, many of whom who carried signs that read: Pass The HEROES Act!, Fund Essential Public Services Now!, Fund The Postal Service Now! and Infrastructure Now!

CWA Local 1168 President Cori Gambini (Pictured Below): “We ‘need more’ PPEs for Health Care and Essential Workers.  I am supposed to use my N95 mask ‘once’ after seeing a patient.  ‘Now I’m using it for a week.’  There are people out there who are ‘price-gouging’ (PPEs).  ‘A mask that went for (80 cents) now goes for ($8 to $9 each).’  ‘We believe another (Coronavirus) surge is coming and we need the tools to get the job done.’  This is a ‘public health care crisis and we must fight like our lives depend on it - because they do.’” 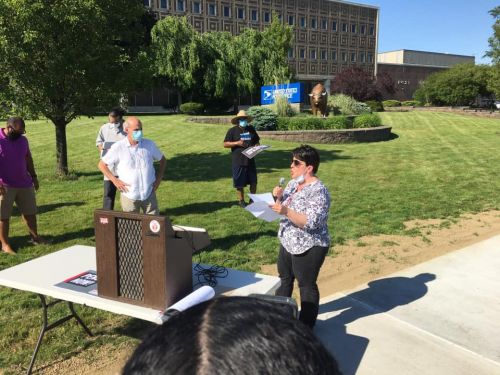 1199 SEIU Political Coordinate Peter DeJesus (Pictured Below): “We ‘cannot play politics with this.’  ‘This is not the time.’  ‘We are fighting for the soul of our country as Americans.’  ‘And not just for Black Lives Matter.’  ‘We’re fighting for the USPS, our schools and our states.’  ‘We, the people, pay into these services.’  We ‘don’t need’ more ($1,200 Federal Stimulus Checks).  ‘It’s our money anyway.’  ‘This is more than just passing one’ Bill.  ‘We are fighting systemic shields that keep people down.’  The USPS ‘is another example.’  It’s ‘not a coincidence’ (the Trump Administration is looking to bankrupt the Postal Service).  ‘It’s because of voting by mail.’  ‘Let’s tell them (in Washington) that if they don’t fully fund (the HEROES Act), that we will see them on Election Day.’” 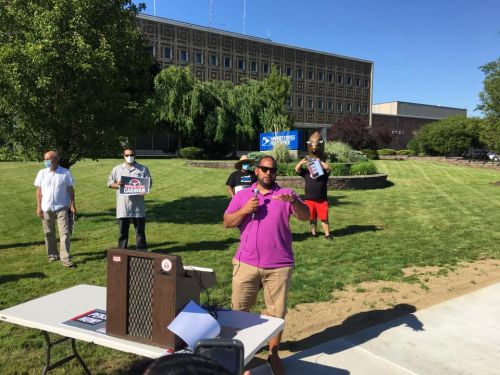 ATU Local 1342 President Jeff Richardson (Pictured Below): “This funding ‘is important to all of us.’  As transportation, ‘my Union and my Members move people and our lives are on the line.’  We’re ‘all’ Essential Workers ‘and we need to get more’ PPE - masks, gloves and shields.  ‘We have to make sure the HEROES Act gets passed so all Unions get what we need.’   Our Union spent ($1,600) ‘of our own money’ to buy gloves for our Members.  ‘We all agree that Essential Workers need to be paid hazard pay.’   ‘Remember, we’re heroes, so don’t give us zeros.’  ‘Together, we win!’  ‘If divided, we will all lose this battle.’” 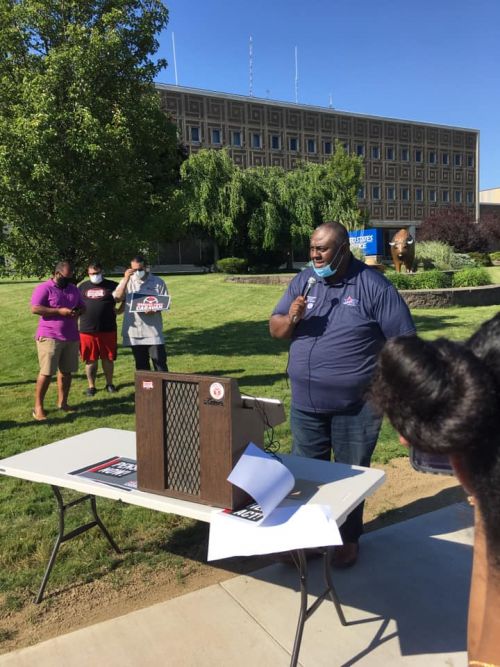 NALC Branch 3 President David Grosskopf (Pictured Below): “There’s ($25 million) for the USPS in the HEROES Act ‘to offset the revenue we’ve lost because of the Coronavirus Pandemic.’  Right now, the Postal Service ‘is down’ (50%) in mail-handling.  Because of the virus, there has been a ‘huge loss’ of mail volume.  But our volume ‘is highest’ for the delivery of packages.  We are working seven days a week, including Sundays.  There’s also ($75 billion) for state and local aid in this Bill.  ‘And, voting by mail is a big deal.’  ‘Think about it: a ballot is delivered to your house and picked up by a trained Unionized Worker.’  ‘There’s no better way (to vote) than this.’  (Trump) called the USPS ‘a joke, which is extremely (discouraging).’  So, we need to call our Federal Representatives – ‘and if they don’t (pass the HEROES Act), we will show up in November in droves.’” 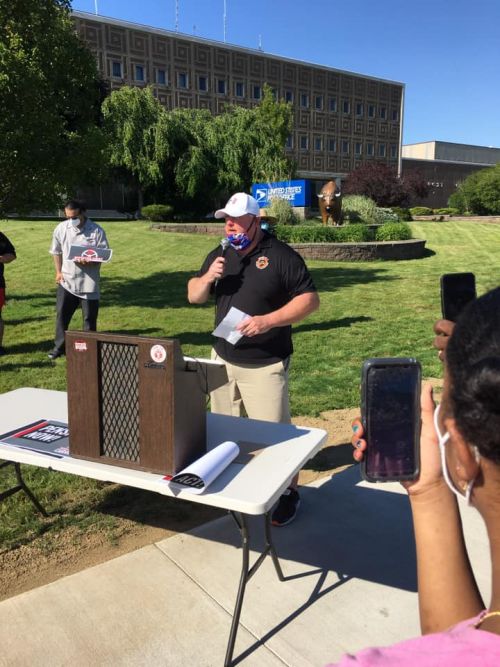 Added Lipsitz as he ended the rally: “We’re asking you to take five minutes and call those targeted Senators.  ‘Put pressure on them - and stick with your Union.’”