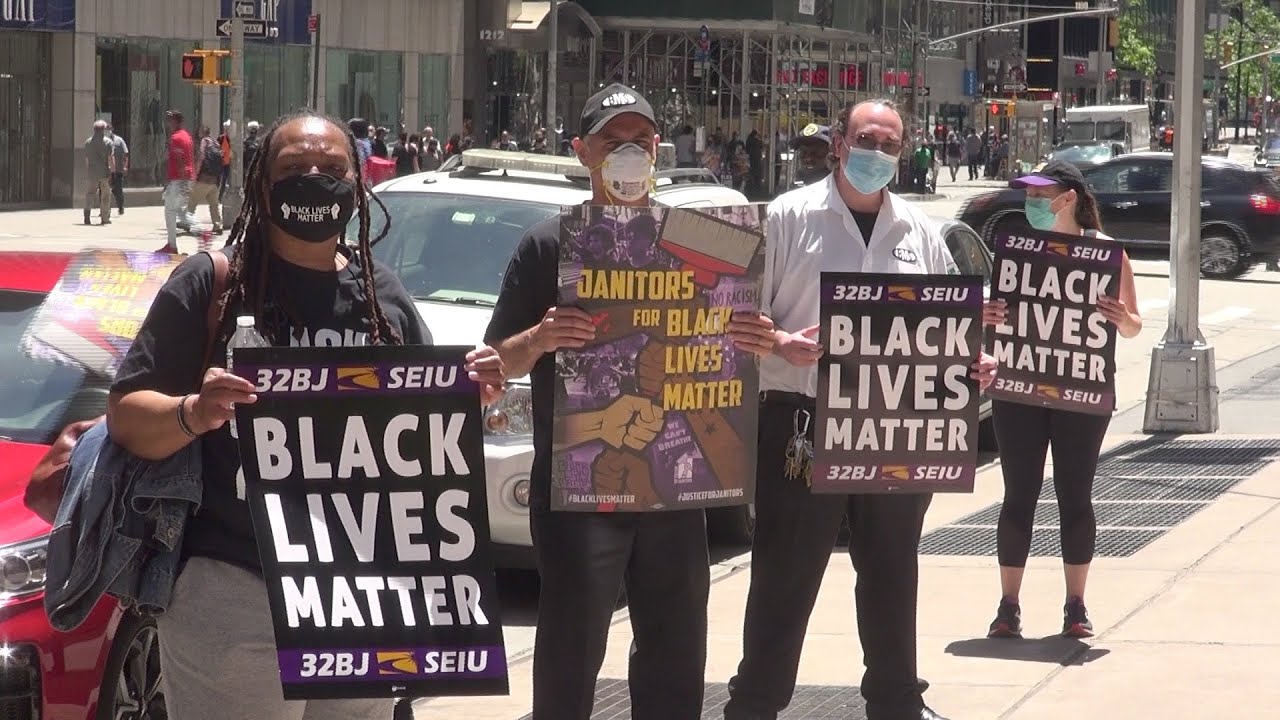 The commemoration coincides with a week’s worth of action organized by the Movement for Black Lives, which has stipulated a series of demands, which the National Union has endorsed.

On June 15tm, 1990 mostly LatinX Janitors were peacefully protesting for the right to form a Union in Los Angeles in response to low wages and minimal health care coverage.  As they were marching through the chic neighborhood of Century City the Los Angeles, police brutally attacked them, beating Janitors with clubs, causing dozens to be sent to the hospital.  The confrontation was so violent that the SEIU filed a lawsuit against the city and its former police chief seeking compensatory damages for the more than 60 Janitors who required medical attention.  Ultimately, the Los Angeles City Council agreed three years after the confrontation, to pay $2.35 million to the Union.

32BJ’s President, Kyle Bragg, spoke into a bullhorn at the corner of 49th Street and 6th Avenue in front of his Members to explain the significance of the Justice for Janitors Movement: “Those LatinX Workers, the movement that they were a part of, ‘inspired a nation and helped’ Janitors, Cleaners, Security Officers and Airport Workers ‘all across this country, to come together to organize and demand economic justice for all Workers.’”

Maxwell Smalls, a Security Officer for the past 12 years, said he worries about getting sick when he has to go to work every day, and that it literally takes every ounce in his body to stay positive and keep sane: “As Essential Workers, ‘we put our lives on the line each and every day to serve and protect our families, our clients, our communities and our country.’  ‘There’s so many people that are dying from Covid-19, so we say enough, enough with disregarding Black lives, we demand respect for Black lives and justice for all Essential Workers.”

To Read This Labor News Story In Its Entirety, Go To: http://laborpress.org/black-lives-matter-movement-adds-sense-of-urgency-to-justice-for-janitors-observance/