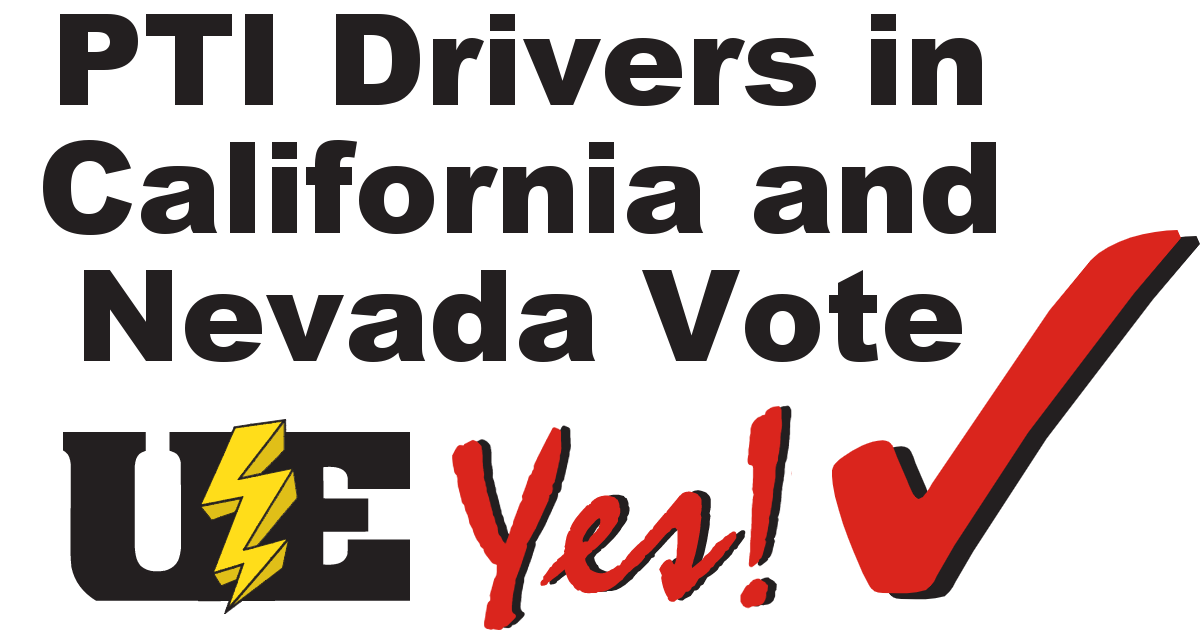 (STATES OF CALIFORNIA & NEVADA) - PTI (Professional Transportation, Incorporated) Workers in the states of California and Nevada, who transport Rail Crews in passenger vans for the Union Pacific Railroad, voted to join the United Electrical Workers (UE) in a recently-held NLRB Election.

This was UE’s first Organizing Election since the onset of the COVID-19 Pandemic and it posed some unique challenges for UE Organizers, since much of California is under a “stay-at-home” order.  The great majority of UE contact with Workers was confined to telephone or conference calls.

“Unions ‘are the backbone of Working Men and Women everywhere,’” said PTI driver Samantha Saint-Cyr, explaining why she and her Co-Workers voted to join UE. “Without them, ‘we are subject to the whims’ of Corporate America.”

Many of the current PTI Workers were previously employed by Hallcon and were Members of UE Local 1077.

However, when PTI was awarded the crew transport contract by Union Pacific in February, it refused to hire a significant number of UE Members and hired many new Employees as part of an effort to evade the Union.

At the same time, it eroded many of the improvements UE has won for Drivers under the UE-Hallcon National Master Agreement.

PTI ran an extensive Anti-Union Campaign in which its CEO visited each work site throughout Nevada and California, holding captive audience meetings as part of a failed attempt to convince Workers that the company cared about their living standards and on-the-job conditions.

To the contrary, PTI’s actions spoke louder than words.

To Directly Access This Labor News Story, Go To: www.ueunion.org/ue-news/2020/pti-rail-crew-drivers-in-california-nevada-choose-ue-to-maintain-standards-safety?fbclid=IwAR3uMgTRt96QmvknD2kvTN-3hxaAb6boO5cyw-wHgUnQjOc7nqv3Vv2vmiA