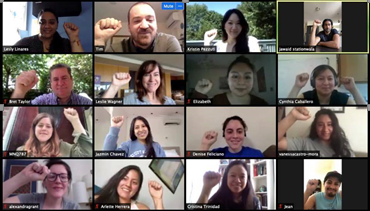 (NEW YORK CITY) - Bronx Defenders Employees are Unionizing and adding to the growing ranks of Legal Services Non-Profits that have organized in recent years.

Workers at the public defense non-profit, which represents low-income people in New York, have announced their Unionization plans to management.

The Bronx Defenders is one of a handful Of Non-Profit Organizations that contract with New York City to provide public defense services, and would be the third to Unionize.

An overwhelming majority of approximately 270 Union-eligible Employees have signed pledge cards to join Association of Legal Aid Attorneys (ALAA)-United Auto Workers (UAW) Local 2325, and Organizers have called on management to recognize the Union voluntarily rather than forcing a Union vote.

The proposed Bargaining Unit includes Public Defenders, Para-Legals, Investigators, Administrative Staff and other Employees who hope to use the benefits of Unionization as a way to negotiate higher salaries, improve access to mental health services, create a greater diversity among leadership, and lower caseloads.

In a second organizing victory, the 30-strong Workers of the Safe Passage Project have voted to join UAW Local 2325 in a landslide victory, 22-to-1.

These Workers - Attorneys, Social Workers, Para-Legals and others - serve Immigrant youth in deportation proceedings and other Immigration services.

Despite a long campaign which went public during the Coronavirus Pandemic, these Workers were able to persevere and after months of waiting to have their Union certified.

The Workers of Bronx Defenders and Safe Passage join hundreds of other Legal Services Workers who have opted for Union Representation in the last year through ALAA, including at the Center for Family Representation, Asian Americans for Equality, New York Legal Assistance Group and Neighborhood Defender Service of Harlem.

For More On This Labor news Story, Read: Bronx Defenders’ Staff Seeks to Be Next Unionized Non-Profit At https://news.bloomberglaw.com/us-law-week/bronx-defenders-staff-look-to-join-wave-of-unionized-nonprofits?fbclid=IwAR2fdh7Mm8MozlETOH9xHfjmZKeQIS_Q7c5n-uLFCk5F9wBLsspo3s_-Jxc&link_id=7&can_id=d28a0e75022b91d73fc95bc86b686390&source=email-union-matters-may-29-2020&email_referrer=email_822982&email_subject=union-matters-june-5-2020