NYSUT Members Across The State Rally For Justice And Action 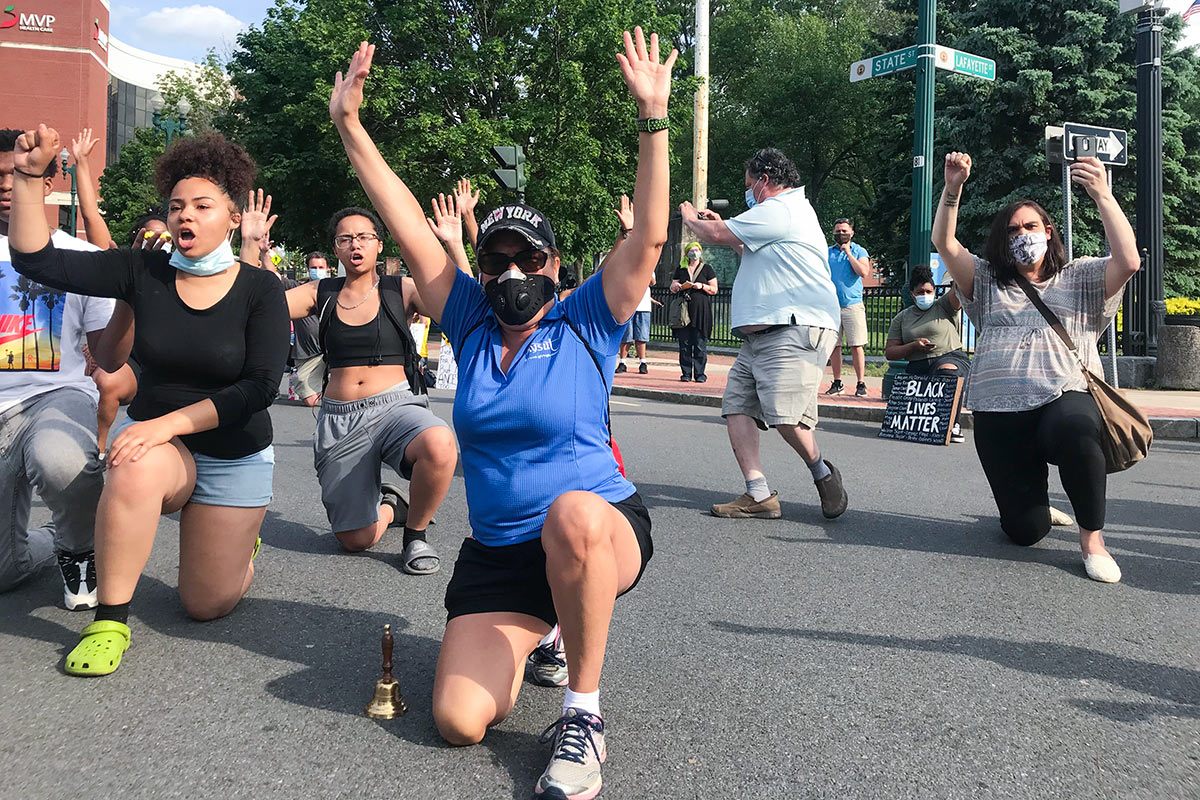 (ACROSS NEW YORK STATE) - Maria Pacheco ended the week with blisters after walking in four rallies for racial justice, traveling with a group of grandmothers who march for their grandchildren “so people don’t look at them like a threat.”

“I’m thinking of them and their future,” she said. “I go as a Latina, as a person of color, as a grandmother, as a teacher, as a mother,” she said. “I’m marching for my students, and I want them to know I’m with them.”

The grandmothers she marches with, she said, are Black, White and Latina.

Pacheco, a member of The New York State United Teachers’ (NYSUT) Board of Directors and the Mohonasen Teachers Association, is one of thousands of Union Members who have been marching in protests across the state and Nation.

While Pacheco is retiring from her job teaching Spanish for more than three decades, she is continuing to educate through her actions, protesting systemic racism - as well as the murders of unarmed Black people by police and racially motivated killings like the murder of Ahmaud Arbery.

Pacheco said she wants to educate colleagues, too, about how implicit biases cause harm.

And, she wants the protests to have clarity.

“I ‘don’t want to be shouting out victims’ names and not have an ask,’” she said.

She wants taxes on the ultra-wealthy, in alignment with NYSUT’s Campaign, to better and more fully support education and students in need.

Inequality often shows its harmful markings in lack of resources in schools where Black and Brown students make up the majority of the population.

Pacheco wants change at the Federal and state levels, including more opportunities for People of Color to buy homes, halting red-lining and disallowing Police Officers with a history of violent interactions with citizens to have their records erased.

In Buffalo, Teacher Eve Shippens has also been rallying for racial justice for years.

“These ‘are the families I serve.’  This is the community ‘I’ live in,” she said. “There are people ‘dying’ in the streets.  ‘We need to take a real hard stand and call for changes that need to happen.’  Our justice system ‘is broken.’  Our neighbors ‘are suffering.’”

Shippens, a Member of NYSUT’s statewide Civil and Human Rights Committee, said she marches for Cariol Horne, a Black woman and 19-year veteran of the police force who tried to stop her police partner from choking an unarmed Black man in his own home.

Horne was punched in the face for her efforts, and then lost her job and her pension – and her house was burned.

Years later, the Officer that she stopped from harming the man spent several months in jail for shooting four Black teenagers with a BB gun, Shippens said.

To Continue Reading This Labor News Story, Go To: www.nysut.org/news/2020/june/protests?fbclid=IwAR2cCBexbvKguHwEaxUMOA_qegh52tEOTjixvkL3_IDVgcKYqdPzn-53Uzk