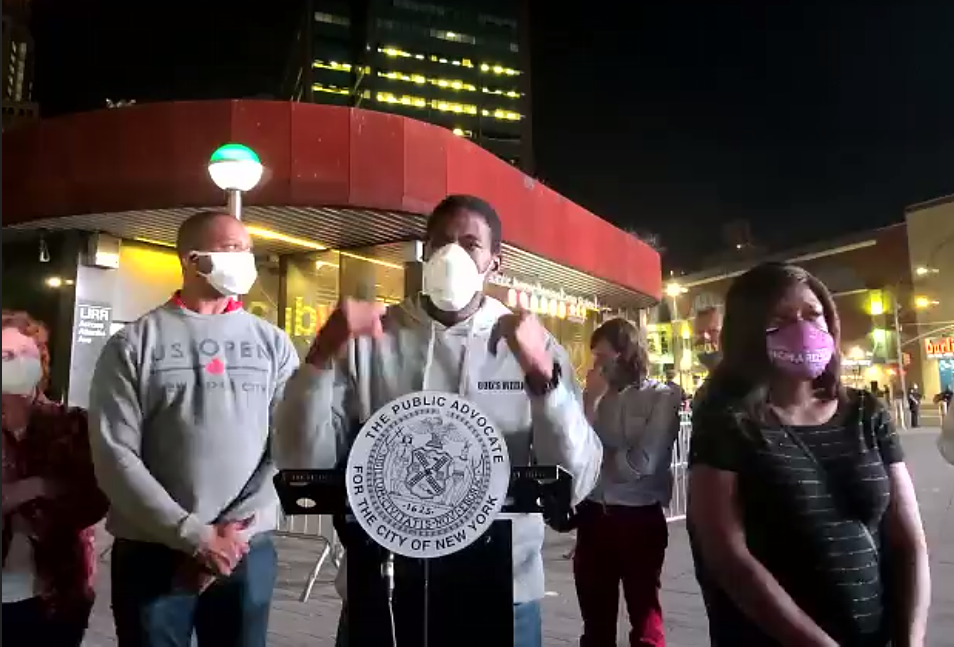 Williams and eight other city and state elected officials defied New York’s first curfew in almost 80 years on Monday (June 1st) to stand together outside of the Barclays Center in Downtown Brooklyn to denounce both de Blasio and Cuomo’s bungling of the COVID-19 Pandemic and their unhinged response to local protests against police brutality and the police killing of George Floyd in Minneapolis, Minnesota last month.

Williams, the highest ranking African-American elected official in New York City, stopped short of calling for the mayor and governor to resign, but said they cannot continue in their present strategy of over-policing communities with curfews and flooding city streets with 4,000 additional highly-militarized cops.

“I ‘just want the people who have the ability to stop this right now, to do it,’” Williams told LaborPress. “And Labor ‘has tremendous power right here to put pressure on these two men that they continue to support.’”

Williams said de Blasio’s legacy is now “tarnished” following a weekend that saw NYPD Cops beat and run cruisers into protesters exercising their Constitutional rights of assembly and free speech: “I ‘hope we remember this come election time.’  The ‘legacy’ of this mayor ‘is so tarnished right now’ - he ran as ‘one person and is somebody completely different.’  But I am saying ‘to the both of them - just for the sake of your legacy - listen to what we’re saying, and do it for the sake of the city and state.’”

Earlier in the day, Republican President Donald Trump threatened to use the Insurrection Act to order the U.S. Military to put down ongoing protests against police brutality nationwide.

Numerous New York Unions have condemned the New York Police Department’s violent suppression of protesters throughout the city over the weekend.

Retail, Wholesale and Department Store Union (RWDSU) President Stuart Appelbaum issued the following statement: “The Labor Movement must stand with the Black Lives Matter Movement in demanding an end to police violence with the same commitment that we fight to improve workers’ rights for a just economy for all.  As Martin Luther King Jr. said: ‘A riot is the language of the unheard.’ I t is time for us to come together as a Nation to set a new course that acknowledges the problematic race relations in our country.  We must tackle the systemic issues that continue to oppress Black People and the economic, housing, health care and societal discrimination that makes it more difficult for Black People to be successful in this country.”

To Read This Labor News Story In Its Entirety, Go To: http://laborpress.org/williams-de-blasio-and-cuomo-have-failed-unions-have-a-role-in-filling-the-void/