National AFL-CIO Headquarters In Washington, D.C. Torched During Protests, President Trumka: We Will Clean Up The Glass, Sweep Away The Ashes And Keep Doing Our Part To Bring A Better Day Out Of This Hour Of Darkness And Despair. 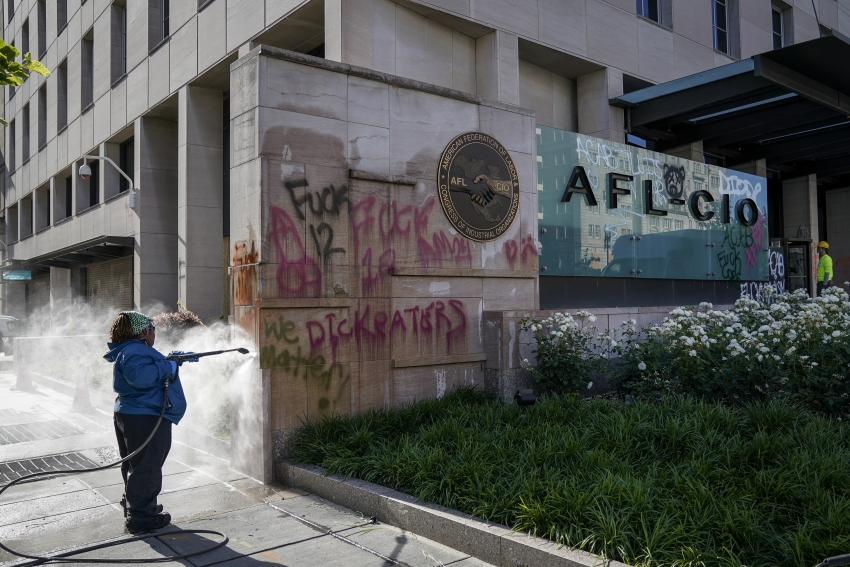 (WASHINGTON, D.C.) – The National AFL-CIO’s Headquarters in Washington, D.C. was vandalized and torched during protests that have been occurring in cities across the United States since the death of George Floyd by the hands of the Minneapolis police, but Labor Federation President Richard Trumka said: “We will clean up the glass, sweep away the ashes and keep doing our part to bring a better day out of this hour of darkness and despair.”

The violence occurred Sunday night (May 31st).  On Monday (June 1st), crews worked to replace broken windows, sweep up broken glass and remove spray-painted messages on the building itself.  Fires had raged inside the lobby the night before as a peaceful protest turned ugly once the sun went down.

My heart is heavy at the events of the past few days.

I watched the video of George Floyd pleading for his life under the knee of a Minneapolis Police Officer.

No person of conscience can hear Floyd’s cries for help and not understand that something is deeply wrong in America.

The difference is now we have cell phones.

It’s there for all of us to see.

And we can’t turn our heads and look away because we feel uncomfortable.

Racism plays an insidious role in the daily lives of all Working People of Color.

This is a Labor Issue because it is a Workplace Issue.

It is a community issue and Unions are the community.

We must and will continue to fight for reforms in policing and to address issues of racial and economic inequality.

We categorically reject those on the fringes who are engaging in violence and destroying property.

Attacks like the one on the AFL-CIO Headquarters are senseless, disgraceful and only play into the hands of those who have oppressed Workers of Color for generations and detract from the peaceful, passionate protesters who are rightly bringing issues of racism to the forefront.

But in the end, the Labor Movement is not a building.

We are a living collection of Working People who will never stop fighting for economic, social and racial justice.

We are united unequivocally against the forces of hate who seek to divide this Nation for their own personal and political gain at our expense.

We will clean up the glass, sweep away the ashes and keep doing our part to bring a better day out of this hour of darkness and despair.

Today and always, the important work of the AFL-CIO continues unabated.

For More On This Labor News Story, Read: AFL-CIO HQ Gets Vandalized

And We’ll Burn Until We Organize At http://inthesetimes.com/working/entry/22557/afl-cio-fire-george-floyd-protest-union-labor?fbclid=IwAR2TO9NhRfr1CmeUsQNFK1K-gZPmbU-XGbkfMEJKul4swumugC_FOFOj9TM