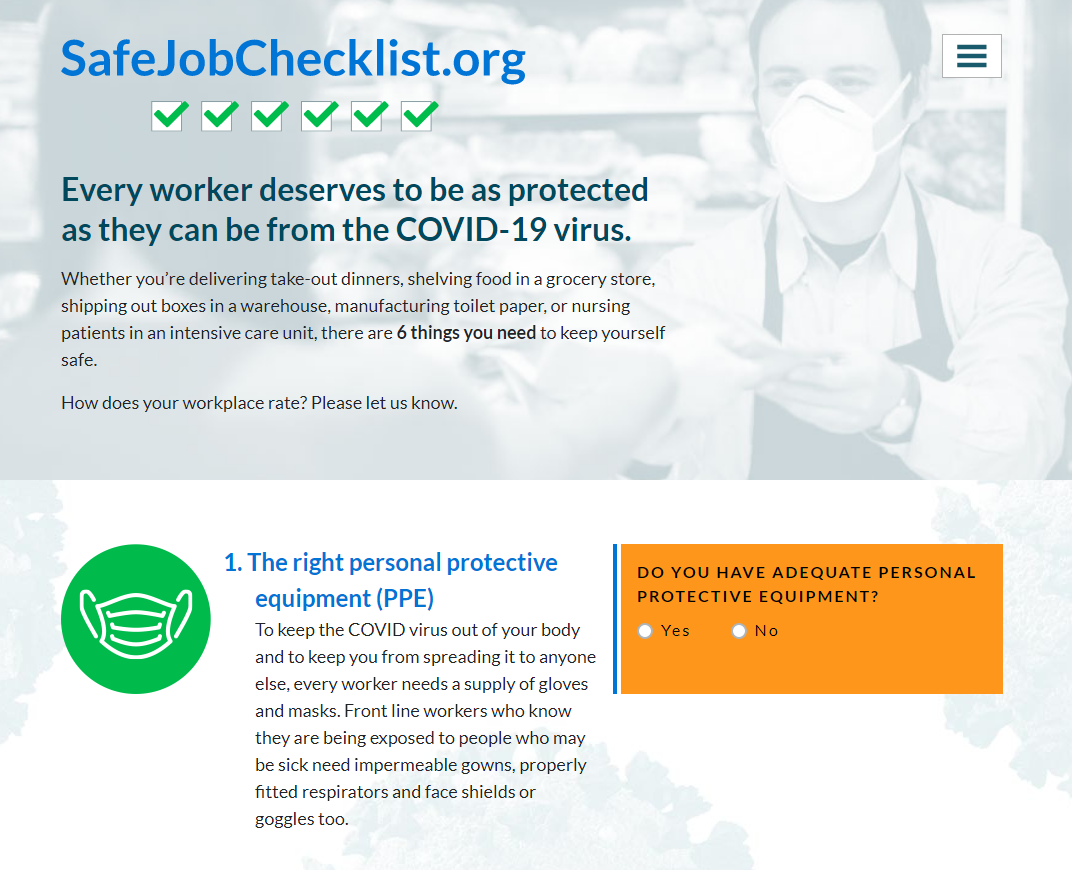 The BlueGreen Alliance, a national partnership of Labor Unions and environmental organizations, has launched a new web tool to help Workers across America safely and anonymously report unsafe work conditions, while also learning about Workers’ Rights and getting access to critical safety information during the COVID-19 Pandemic.

SafeJobChecklist.org features six questions that help users determine whether the “guidance” from the Federal Government was achieving its goals without adequate oversight from the U.S. Occupational Safety and Health Administration (OSHA).

“OSHA I’s not doing its job to create enforceable rules that make sure’ employers ‘are doing their part to keep Workers safe on the job, so we’re taking action to get workers the information they need,’” BlueGreen Alliance Executive Director Jason Walsh said. “This is an ‘easy-to-use’ tool that informs Workers ‘about the steps their employer should take to keep them safe on the job during COVID-19 and allows them the opportunity to anonymously report their conditions.’”

“It took us about a month,” said Brody about the creation of the on-line tool. “We ‘didn’t want to just say it was anonymous, but we also wanted to have a site that protected Workers that don’t have a Union or an OSHA that is going to protect them.’  ‘So it took us a while to design a site that was really doing that.’”

The tool helps Workers learn about what they need to have and gives them the space to describe what they don’t have to press OSHA to create a strong enforceable Federal Mandate to help save lives during this crisis, according to Brody.

“We ‘just want to do more to protect’ Workers,” said Brody. “We have been reading the same newspaper articles as everybody else.”

In Washington State, there is language turning the advisory notes of OSHA into a rule, according to Brody, who hopes more Workers use the tool to help stand up for themselves.

“So far the feedback (on the tool) ‘has been really affirming,’” Brody said. “We had many people responding and saying things like ‘we were just asking this question yesterday’ or ‘I know six places that I’m going to send this too.'”

Some of the Workers who responded are in retail, work at warehouses, and are in package delivery and manufacturing, according to Brody.

“The response today ‘has shown the difference of what a strong Union can make,’” Brody said. “The places that have safety and health teams that fitted everybody for a respirator months ago ‘have been negotiating strong ventilation for years and have really good Paid Sick Day Programs.’  They are beyond this tool, ‘but many aren’t.’”

Despite being proud of the tool, Brody wishes there wasn’t a need for it to begin with.

“Its ‘horrible to even talk about, but if we can save a life then the work that went into this website is way worth it,’” said Brody.

To Continue Reading This Labor News Story, Go To: http://laborpress.org/new-online-tool-to-help-workers-easily-report-unsafe-conditions/