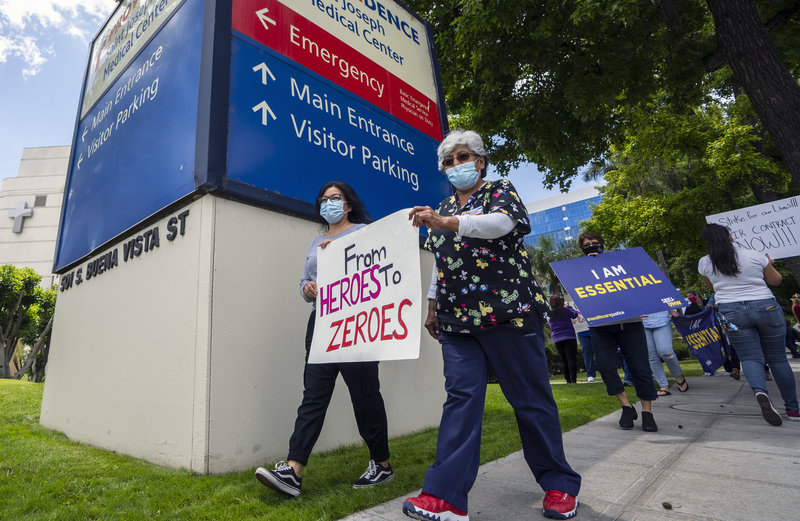 (WASHINGTON, D.C.) - When Republican President Donald Trump took office in 2017, his team stopped work on new Federal Regulations that would have forced the Health Care Industry to prepare for an airborne infectious disease pandemic such as COVID-19.  That decision is documented in Federal Records reviewed by National Public Radio (NPR).

"If that rule ‘had gone into effect, then every’ hospital, ‘every’ nursing home ‘would essentially have to have a plan where they made sure they had enough respirators and they were prepared for this sort of pandemic,’" said David Michaels, who was head of the U.S. Occupational Safety and Health Administration (OSHA) until January 2017.

There are still no specific Federal Regulations protecting Health Care Workers from deadly airborne pathogens such as Influenza, Tuberculosis or the Coronavirus.

This fact hit home during the last respiratory pandemic, the H1N1 outbreak in 2009.  Thousands of Americans died and dozens of Health Care Workers got sick.  At least four Nurses died.

There were also shortages of Personal Protective Equipment (PPE).

"(H1N1) ‘made it very clear OSHA did not have adequate standards for airborne transmission and contact transmission, and so we began writing a standard to do that,’" Michaels said.

That's because similar rules had already been created for blood-borne pathogens such as Ebola and Hepatitis.

Those rules, implemented during the HIV/AIDS Epidemic, forced the Health Care Industry to adopt safety plans and buy more equipment designed to protect Staff and patients.

But making a new Infectious Disease Regulation, affecting much of the American Health Care System, is time-consuming and contentious.

It requires lengthy consultation with scientists, doctors and other State and Federal Regulatory Agencies, as well as the Nursing Home and Hospital Industries that would be forced to implement the standard.

Federal records reviewed by NPR show OSHA went step by step through that process for six years and by early 2016 the new Infectious Disease Rule was ready.

The Obama White House formally added it to a list of regulations scheduled to be implemented in 2017.

Then came the Presidential Election.

NPR could find no indication the new administration had specific policy concerns about the Infectious Disease Rules.

Instead, the decision appeared to be part of a wider effort to cut regulations and bureaucratic oversight.

"Earlier this year we set a target of adding zero new regulatory costs onto the American economy," Trump said in December 2017. "As a result, the never-ending growth of red tape in America has come to a sudden, screeching and beautiful halt."

The impact on the Federal effort to protect Health Care Workers from diseases such as COVID-19 was immediate.

"The Infectious Disease Standard ‘was put on the back-burner.’  ‘Work stopped,’" said Michaels, now a Professor at George Washington University.

To Continue Reading This Labor News Story, Go To: www.npr.org/2020/05/26/862018484/trump-team-killed-rule-designed-to-protect-health-workers-from-pandemic-like-cov?utm_term=nprnews&utm_campaign=npr&utm_source=facebook.com&utm_medium=social&fbclid=IwAR1PoTsSjcjjQmc_Irv7T8EvTwZ8Q1fFUQ5qdrHtC-gMkSI01Z__HSgptjA

And For More, Read: Trump And GOP Want COVID-19 Protections For Bosses — But Not Workers At: https://truthout.org/articles/trump-and-gop-want-covid-19-protections-for-bosses-but-not-workers/