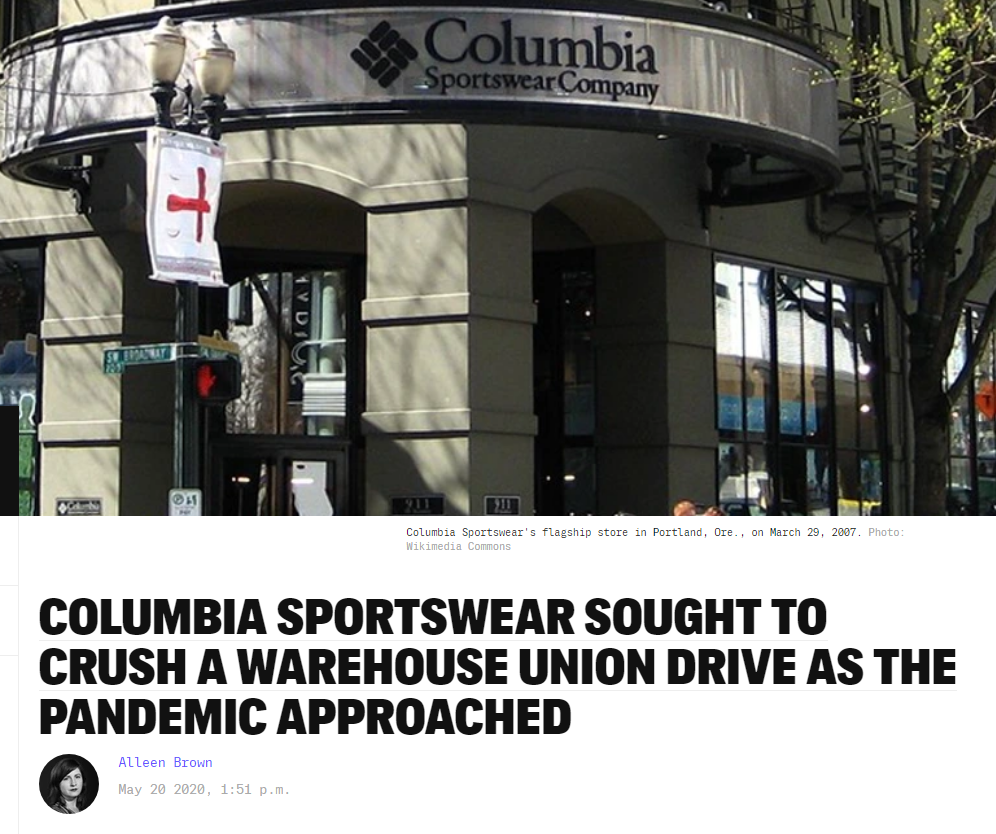 As the Coronavirus crisis gained momentum at the end of March, Columbia Sportswear CEO Tim Boyle made headlines for cutting his annual salary from $954,810 to $10,000.

And although the company’s retail stores would temporarily close, Columbia announced that it would continue to pay its Store Workers.

The moves landed Boyle on a shortlist of billionaire corporate leaders who made personal compromises in an effort to shield Employees from the pandemic’s economic blows.

Capitalizing on the good press, Columbia launched a Social Media Campaign called “Tougher Together,” which featured Q&A sessions with athletes and encouraged even the most avid outdoorspeople to stay home.

But the hashtag’s reference to the company’s past “Tested Tough” and “One Tough Mother” advertising campaigns belied the slogan’s origins.

Back in December, Warehouse Workers at Columbia’s Portland, Oregon Distribution Center had marched into their manager’s office and delivered a petition demanding the company remain neutral as they sought to form a Union with the Teamsters.

The Pro-Union Workers launched a Facebook page the same day.

Its title: Tougher Together.

To the Union Organizers who came up with the slogan, many of whom have continued to work in the warehouse amid the pandemic, Columbia was using the crisis as an opportunity to take a jab at Employees who suggested working conditions were less than exemplary.

Boyle’s lauded pay cut also only told half the story.

The same day that Oregon Governor Kate Brown issued the state’s stay-at-home order, Boyle was scheduled to receive more than $6 million via a quarterly cash dividend on Columbia Sportswear stocks.

In fact, his salary represented a tiny proportion of his pay last year, which totaled more than $26 million, according to an analysis for The Intercept by Matt Hopkins of the Academic-Industry Research Network.

By comparison, disclosure records indicate that the median income for Columbia workers in 2019 was $27,562.

Only after Boyle received his March payout did the company suspend future cash dividends.

Appropriating the Workers’ slogan was the latest in a long string of moves Columbia has made to demoralize and intimidate Employees into ceasing Union Organizing, according to several people involved in the effort.

Audio recordings provided to The Intercept offer a rare inside look at how a company long considered a pillar of the Pacific Northwest sought to crush Workers’ Unionization efforts.

As the pandemic hit, Workers said they felt unprotected by Columbia’s safety measures and left without a voice in an environment where they feared the consequences of raising concerns.

Behind closed doors, Columbia managers discussed sowing discord among Employees and building cases for firing those involved in the Unionization effort.

They called some Workers too dumb to know what a Union was and made crude jokes about how they could retaliate.

To Continue Reading This Labor News Story, Go To: https://theintercept.com/2020/05/20/columbia-sportswear-warehouse-workers-union-teamsters/?fbclid=IwAR11_MU50Y3dZRJ1UOUUKuKSEdahNPsR0WUSWsaKDTbv5O_MneMXXEDOeCY