Published Tuesday, May 26, 2020
by Steve Wishnia/LaborPress.org 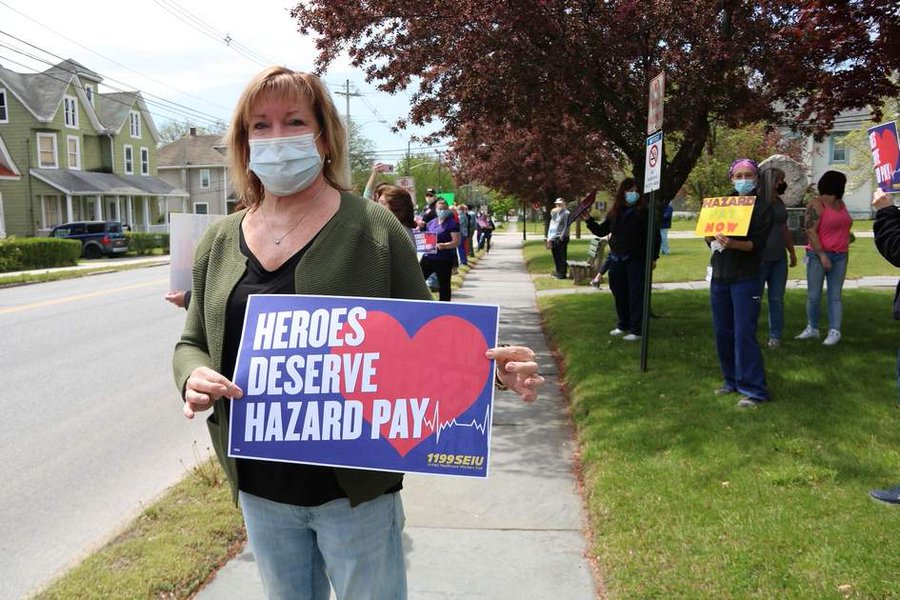 “Workers ‘want to be recognized for risking their lives,’” 1199 Service Employees International Union (SEIU) Spokesperson Cara Noel told LaborPress. “(1199) Members ‘have been on the front lines of this crisis every day from the beginning.’  They’ve ‘gowned up’ and ‘stabilized people who were unable to care for themselves.’”

The Union, which represents Workers at for-profit nursing homes, said that the corporate networks that own scores of nursing homes were refusing “to acknowledge the risks and sacrifices that are being made during the COVID-19 crisis” and had failed “to recognize the grief and loss being experienced by Caregivers.”

No one chanted and all participants wore masks and stood at least six feet apart.

Nursing home residents, who are generally elderly, already in declining health, and living in close proximity, are extremely vulnerable to COVID-19.

The first major cluster of the infection occurred at one in the Seattle suburbs in February.

Since then, at least one-third of the people who died from the virus in the U.S. have been nursing home patients, with the proportion above 80% in Minnesota and 70% in Ohio.

In New York State, at least 5,700 patients were confirmed or presumed to have died from the virus as of May 20th, according to the New York State Department of Health, with about 15 facilities reporting more than 50 deaths.

They present particular problems for preventing the disease from spreading because of the way they’re set up, Noel explained.

“It’s ‘complicated when someone has dementia and doesn’t understand the need to change their routine,’” she said.

The industry-standard N95 masks are supposed to be changed after every exposure to an infected person, Noel says, but that’s difficult with a national shortage and some Workers being exposed to 15 infected people a day.

“Folks ‘are being asked to keep their masks on for a week,’” she said.

And some 1199 SEIU Members have to quarantine themselves when they come home to avoid the possibility of infecting their families.

To Continue Reading This Labor News Story, Go To: http://laborpress.org/1199seiu-members-hold-solemn-vigils-outside-devastated-ny-nursing-homes/