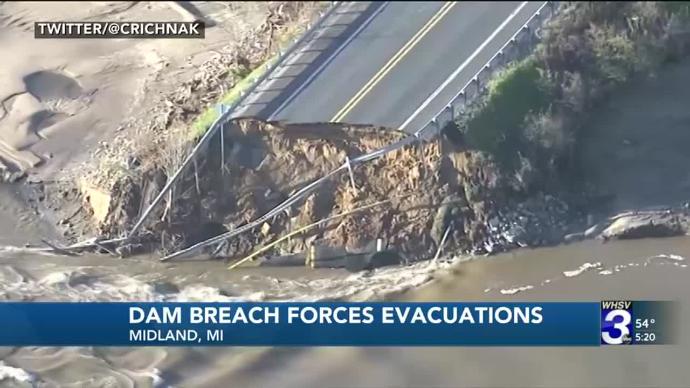 (MIDLAND, MICHIGAN) – Calling the disaster “preventable,” United Steelworkers (USW) International President Tom Conway is calling on political leadership Washington, D.C. to come to an agreement on a massive overhaul of the country’s infrastructure after the breaching of the Edenville and Sanford dams in the State of Michigan, which caused historic flooding and forced at least 10,000 people from their homes in and around Midland.

“This is a devastating blow to the people and communities of Central Michigan, many of whom are members of our Union.

Our hearts go out to them and their families and to everyone dealing with the results of this terrible disaster.

In particular, Midland is home to the headquarters and manufacturing facilities for Dow Chemical Company, where approximately 700 USW Members make their living, as well as hundreds more Members who work at other facilities in the area.

The safety and well-being of them and their families is of paramount concern at this terrible time.

Unfortunately, among the many upsetting facts about this situation is that it could and should have been prevented.

The Edenville Dam is nearly 100 years old and officials have warned for years that it was inadequate to handle water levels of this magnitude.

This disaster brings into clear focus the horrible consequences of the Federal Government’s failure to invest in our Nation’s crumbling infrastructure.

President Trump made that issue a central part of his campaign, and yet, four years later, we are still waiting for action.

Especially at this time of ever-rising unemployment and economic anxiety, it’s time for leaders in Washington, D.C. to come to an agreement for a massive overhaul of our infrastructure.

This will put Americans back to work, bring our country fully into the 21st Century, allow us to compete in the global economy, and prevent future disasters like the one in Midland from devastating our communities.

Our hope is that the government responds with swift relief for the people and businesses in the Midland region so that they can quickly recover from this tragedy.

Then lawmakers must turn their attention to the rest of the country and provide the investments necessary to make sure a disaster like this doesn’t happen again.”

The USW represents 850,000 Members who are employed in metals, mining, pulp and paper, rubber, chemicals, glass, auto supply and the energy-producing industries, along with a growing number of Workers in public sector and service occupations.

To Directly Access This Labor News Story, Go To: www.usw.org/news/media-center/releases/2020/usw-dam-failure-disaster-spotlights-need-for-large-scale-infrastructure-commitment?fbclid=IwAR3eS0zz8eoqAUxOVSXrhvYM66YQ7na_ZUt5VDB-YvqA0CnV_7JidjFLi9Y#.Xsb_98CwNCI.facebook