Published Friday, May 22, 2020
by Mark Gruenberg Via Peoples World 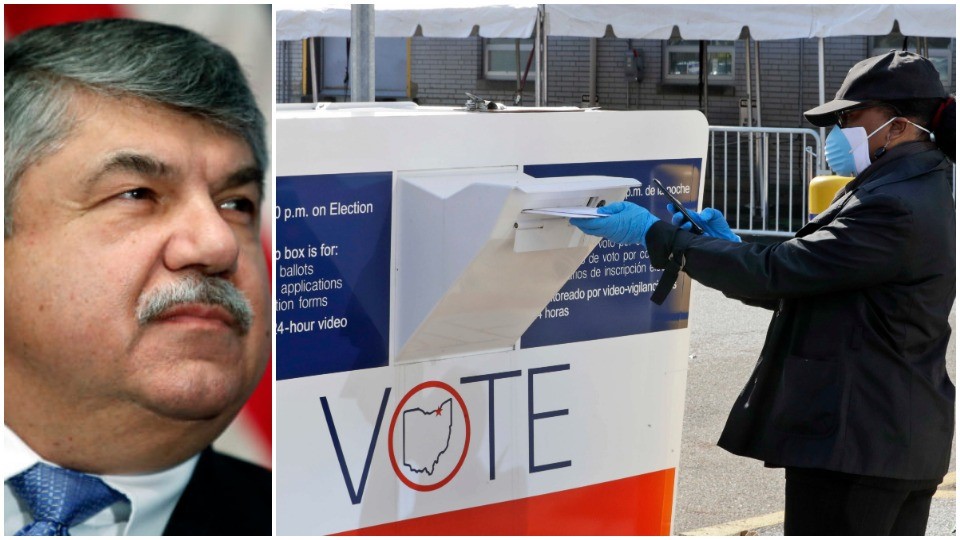 (WASHINGTON, D.C.) - Top Union Leaders, marshaled by National AFL-CIO President Richard Trumka, are backing the $3.6 billion in the House Democrats’ Stimulus Bill to pay states to establish Vote-By-Mail Systems - and the measure’s mandate requiring states to do so.

But whether the Unionists’ statements, plus wide public support for the idea, will be enough to sway either Republican President Donald Trump or the overwhelming majority of the Senate’s ruling Republicans, remains to be seen.

Both Trump and the GOP Lawmakers fear that the more people vote, as Trump put it, the more the Republicans lose at the polls.

The vote-by-mail money is part of the $3 trillion House version of the Economic Stimulus Bill that was passed last week.

Congress needs to pass it now, Klobuchar said, so states have enough time to set up and test-run their vote-by-mail registrations, procedures and systems.

Vote-by-mail will help “Front Line Workers - the Nurses, those who are driving trucks and in grocery stores and others, who are working from home and have kids there” due to Shelter-in-Place Policies the Coronavirus Pandemic mandated, Klobuchar said.

Those voters also don’t want to risk their health or lives to the virus’s community spread by waiting in voter lines.

Her measure has some GOP support, from governors.

In the 2018 off-year election, turnout as a percentage of eligible voters zoomed, especially in those states with vote-by-mail, such as Colorado, Utah, Washington, Oregon, and California.

It also rose hugely in states such as Minnesota and Illinois, which have same-day voter registration.

And the high turnout, combined with a horde of progressive female candidates seeking U.S. House seats, and anger against Trump and the GOP - even before the Coronavirus Pandemic hit - combined to produce an enormous shift of House seats to Democrats, along with control and election of a number of pro-Worker Lawmakers.

State legislative and gubernatorial votes saw similar results, except in states, like Georgia and Florida, with rampant GOP-pushed voter suppression efforts, heavily gerrymandered legislatures, or both.

All this will make enacting vote-by-mail the first top cause of Labor 2020, the National AFL-CIO’s election effort, Trumka said.

“In the middle of a global pandemic, ‘we must make it easier to vote than ever before,’” he explained.

The $3.6 billion for vote-by-mail and $25 billion more for the Postal Service - so carriers can deliver and pick up ballots, along with other mail - “are investments in our democracy,” he said.

American Federation of State, County & Municipal Employees (AFSCME) President Lee Saunders pointed out the bias of foes of vote-by-mail against both Workers and People of Color.

“Of the ten states that have the strictest ‘Voter ID’ Laws” - the now-generic name for all sorts of voter suppression - “nine are Right-To-Work States,” he said.

Right-To-Work (for less) Laws, a favorite corporate and Right Wing cause, deprive Unions of funds by letting Workers use Union Services without paying one red cent for them.

To Continue Reading This Labor News Story, Go To: www.peoplesworld.org/article/union-leaders-back-vote-by-mail/?fbclid=IwAR3-Hx0b5MXLwD5ZXs89r4o4j80s4D1cskR_6tR1P72RJkr0hJQo6pLeWHU