Published Thursday, May 21, 2020
by Steve Wishnia/LaborPress.org 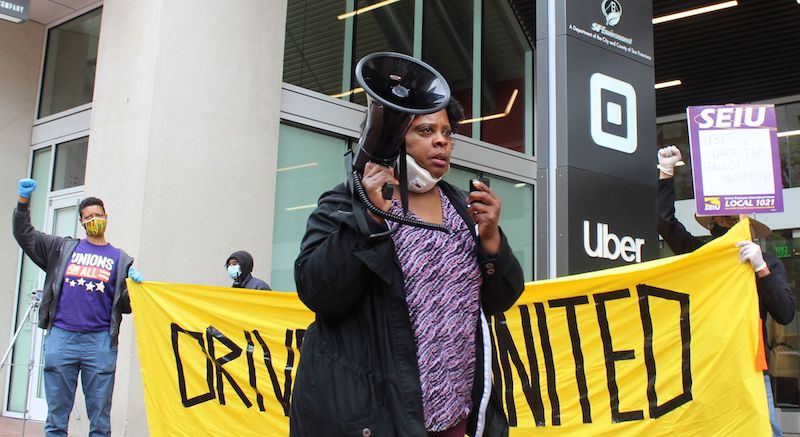 (SAN FRANCISCO, CALIFORNIA) - Uber and Lyft’s refusal to accept the new California Law intended to define their Drivers as Employees has had one harsh consequence - many who lost income or have been unable to work because of the COVID-19 virus epidemic have also been unable to get Unemployment Benefits.

“We ‘can’t apply for’ unemployment ‘because we’re supposed to be Independent’ Contractors,” said Hector Castellanos, an Uber Driver from Antioch, about 45 miles east of San Francisco.

Castellanos, a 49-year-old father of two, stopped working when California’s quarantine began on  March 17th.  His doctor advised him that he “could ‘get a little more sick’ than the other person,” he said.  He applied for the Pandemic Unemployment Assistance Program for Independent Contractors when it opened six weeks later, but hasn’t received any money yet.

Uber Driver Saori Okawa, a 37-year-old Japanese Immigrant from San Francisco, applied for unemployment in late March, after her income dropped by half - but Uber, she says, wouldn’t give the State Employment Development Department information about her income, which was essential to calculate her benefits, because it insisted she’s an Independent Contractor.

She’s appealed the denial, but hasn’t gotten approved yet.

Both were part of a caravan of several dozen vehicles that drove from a parking lot in San Francisco’s South of Market neighborhood to Uber’s Headquarters at the west end of downtown earlier this month, where the company was hosting an on-line stockholders’ meeting.

The protest, organized by We Drive Progress and Gig Workers Rising, demanded the company drop its campaign to for a ballot initiative to repeal the new Law, Assembly Bill 5, and use the money to give Drivers financial support and Personal Protective Equipment (PPE).

The Law strictly limits when employers can define Workers as Independent Contractors instead of Employees and thus deny them Workers’ Compensation and the right to collective bargaining.

Uber, Lyft and DoorDash have so far spent $110 million on the repeal initiative - called the Protect App-Based Drivers and Services Act - according to Service Employees International Union (SEIU) Local 1021, which is aiding the protesting Drivers.

“This company ‘spends millions of dollars on the ballot,’” Castellanos said. “They ‘could use that money to give workers sick pay.’”

He knows the lack of Workers’ Compensation painfully well - when he was unable to work for eight months after an accident, his older daughter had to drop out of college and go to work.

Okawa switched to doing deliveries, mostly food, because business picking up passengers was too slow and she was scared to keep doing it.

PPE such as masks and hand sanitizer has been “very scarce,” she adds.

“Because I ‘juggle three apps, I manage to make a sort of livable income,’” she says.

She works from 7:30 in the morning to 8 at night five or six days a week, without the breaks she used to get.

To Continue Reading This Labor News Story, Go To: http://laborpress.org/west-coast-app-drivers-take-to-the-streets-to-confront-uber-and-lyfts-assault-on-worker-protections/