Published Tuesday, May 19, 2020
by Joe Maniscalco/LaborPress.org 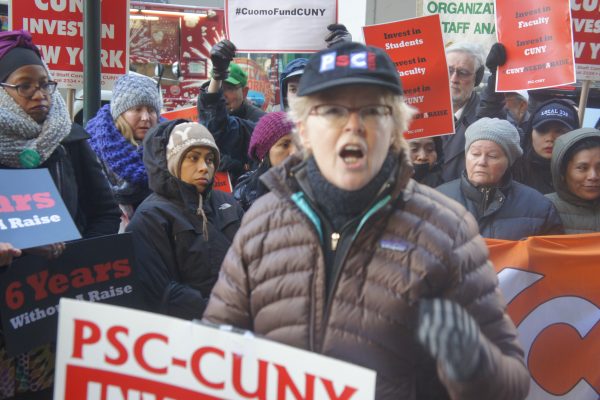 (NEW YORK CITY) - Now that they’ve been bailed out, the Corporate Class is wasting no time trying to shove austerity measures down the throats of our “Front-Line Heroes” and “Essential Workers” studying at the City University of New York (CUNY).

On Monday (May 18th), CUNY students and faculty fought back against efforts to terminate thousands of Adjunct Professors and Contingent Employees in the middle of the COVID-19 Global Pandemic - hitting the streets of Manhattan in a rolling caravan targeting the institute of higher learning’s Board of Trustees, Governor Andrew Cuomo and Empire State’s entire Billionaire Class.

Instead of axing as much as 40% of the teaching force, CUNY students - many of whom are working their way through school during the pandemic as indispensable Grocery Store Clerks, Package Handlers and the like - are demanding budgetary gaps be filled with taxes on the rich.

Draconian cuts to higher education are “the wrong way to go at any time - but especially during a pandemic,” Professional Staff Congress (PSC-CUNY) President Barbara Bowen told reporters during a teleconference held ahead of the caravan late last week.

Indeed, CUNY reacted far differently to the Great Depression of the 1930s - actually debuting three new colleges in Brooklyn, Queens and the Bronx.

By failing to levy new taxes on the super-rich now, Bowen said New York leaders are making a conscience choice to “protect the already wealthy.”

“The ‘rich got rich through the labor of Working People,’” Bowen said. “It’s ‘time they pay their fair share.’”

There is nothing supplemental or supportive about the Adjunct Professors teaching at CUNY’s 25 separate campuses - Adjuncts actually comprise 56% of the institution’s teaching force.

Part of the institution’s mission states that the “City University is of vital importance as a vehicle for the upward mobility of the disadvantaged in the City of New York.”

According to the Manhattan Rep, CUNY is a “system that’s crumbling as we speak” and it can’t be saved without dedicated funding streams.

“If ‘we cared about higher education we would not be in this situation,’” Epstein said. “We ‘need to tax millionaires and billionaires.’  The state ‘has to step up and step in.’”

To Read This Labor News Story In Its Entirety, Go To: http://laborpress.org/union-representing-cuny-adjuncts-hits-the-streets-to-protest-mass-layoffs-more-austerity-measures-for-students-and-staff/