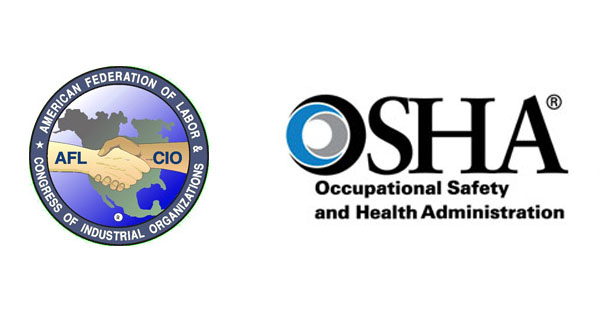 (WASHINGTON, D.C.) - The National AFL-CIO has filed a petition for a Writ of Mandamus in the U.S. Court of Appeals to compel the Occupational Safety and Health Administration (OSHA) to issue an Emergency Temporary Standard (ETS) protecting U.S. Workers against the Coronavirus.

The petition demonstrates that thousands of Workers have been infected on the job through exposure to infected patients, Co-Workers and unscreened members of the public, the National Labor Organization said.

As the economy reopens and people return to work, person-to-person contact will increase and health experts predict the already shocking number of infections and deaths among Workers will rise, the National AFL-CIO said.

“It’s ‘truly a sad day in America when Working People must sue the organization tasked with protecting our health and safety,’” National AFL-CIO President Richard Trumka said. “But we’ve been left ‘no’ choice.  Millions are infected and nearly (90,000) have died, ‘so it’s beyond urgent that action is taken to protect Workers who risk our lives daily to respond to this public health emergency.’  ‘If’ the Trump Administration ‘refuses to act, we must compel them to.’”

Even with overwhelming evidence that additional protection is needed, U.S. Secretary of Labor Eugene Scalia has been unwilling to fulfill the duties Congress entrusted him with.

In response to a letter from Trumka demanding OSHA action, Scalia stated on April 30th that a mandatory standard specifically addressing the grave risk posed by the virus was not necessary.

“OSHA ‘was intended to be that vehicle to protect Workers, yet it is not.’  The dozens of OSHA complaints across the country we have filed ‘have been met by silence’ as the Trump administration ‘refuses to do its job to enforce a Safe Workplace Standard,’” American Federation of Teachers (AFT) President Randi Weingarten said.

“And this has had a ‘huge effect:’ Our Members ‘are getting sick and dying’ - we’ve lost more than (160) Members, including Public Employees, Health Care Workers and Educators to COVID-19, ‘many of which could have been prevented if they had been provided the proper protections.’  Health Care and other Essential Workers ‘can’t simply rely on their Union buying them PPE (Personal Protection Equipment), as we have done, or the gratitude of strangers.’  ‘This action is needed to get the Trump Administration to do its job,’” Weingarten said

The National AFL-CIO and several of its Affiliated Unions have pursued Worker Protections for years, petitioning OSHA to adopt a general Infectious Disease Standard as early as 2009 in the wake of SARS and other threatened pandemics, and the agency initiated rule-making procedures but never issued a standard.

The Trump Administration abandoned the standard-making process once taking office in January 2017.

OSHA has a duty to issue an ETS when it finds there is a grave danger to Working People and that a standard is necessary to protect them, the National AFL-CIO says.

It is clear that now is the time for the agency tasked with protecting Workers to do its job, Trumka said.

The National AFL-CIO, together with 23 National Unions, petitioned OSHA to issue an ETS on March 6th, and National Nurses United (NNU) did so on March 4th.

To date, OSHA has taken no action on the petitions.

To Directly Access This Labor News Story, Go To: https://aflcio.org/press/releases/afl-cio-sues-osha-emergency-temporary-standard-protect-workers