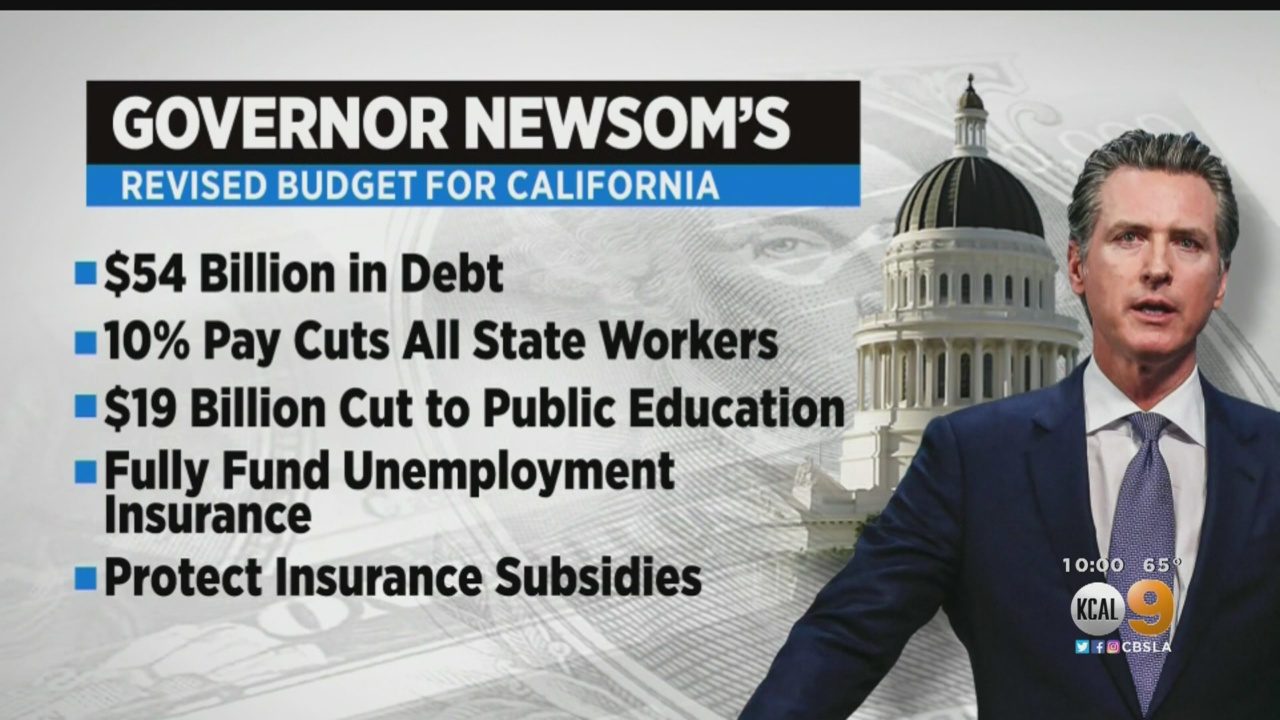 (SACRAMENTO, CALIFORNIA) - Governor Gavin Newsom is propose a 10% pay cut for State Workers, according to two Labor Union Leaders, part of his plan to fill a projected $54.3 billion budget deficit caused by the Coronavirus-induced economic downturn.

Tim Edwards, president of the Union representing state Firefighters, said the proposal would not spare them even as the state enters wildfire season.

A state official said it will be part of the collective bargaining process.

If the Newsom administration fails to achieve the necessary savings through negotiation, the Governor could order furloughs instead.

The pay cuts could be revisited should the Federal Government approve another aid package for state and local governments.

Newsom and the leaders of four other Western States have asked Congress for an additional $1 trillion.

Walker said the Union will try to negotiate an alternative plan.

“We can call the bargaining team together and we can figure out the equivalent of what that ten-percent represents and try to negotiate something,” Walker said. “Yeah, there ‘might be a little pain involved but it won’t be the same as two furlough days.’”

Last week, Newsom said his revised budget will include more than $200 million to increase the state’s preparations for looming wildfires and other disasters.  That includes hiring an additional 500 Firefighters and 100 Support Personnel to help make up for the loss of dozens of Inmate Firefighters who were paroled to ease the risk of Coronavirus outbreaks.

State Officials have furloughed State Workers during previous budget deficits, but Edwards said furloughs could cost the state more money because the idled Firefighters would have to be backed up with a replacement earning overtime.

“Being one of the ‘lowest-paid’ fire departments already in California (compared to Metro Fire Departments), ‘pay cuts would not go well for us,’” said Edwards, who is President of CalFire Local 2881. “We’re waiting to see what the Governor and California Human Resources have to say, ‘and we’ll work through it.’”

Newsom had proposed a $222.2 billion spending plan in January that included a nearly $6 billion surplus, but that changed in March, when Newsom issued a mandatory, statewide stay-at-home order to slow the spread of the Coronavirus.

The order closed schools and most businesses, prompting more than 4.5 million people to file for Unemployment Benefits.

With so many people out of work, state tax revenues have plummeted.

To Continue Reading This Labor News Story, Go To: www.cnbc.com/2020/05/14/california-governor-to-propose-10percent-pay-cut-for-state-workers-to-help-with-54-billion-deficit-union-leaders-say.html?fbclid=IwAR1-PGugmROoHMUqXsLUWoys_gj1TNTXn95Ws6fP1BKfdYxhaB_S6saX5OM