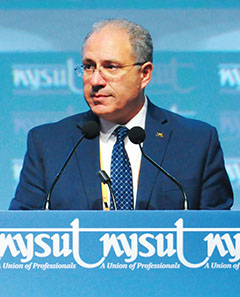 (ALBANY, NEW YORK) - Andy Pallotta has been re-elected to a second three-year term as President of the New York State United Teachers (NYSUT) Union, which represents more than 600,000 Members in education, human services and health care across New York.

Under Pallotta’s leadership, NYSUT has overcome significant challenges in the past three years to deliver for NYSUT Members across the state.

NYSUT ran a successful organizing campaign in the lead up to and in the wake of the U.S. Supreme Court’s Janus v. AFSCME decision, showing the benefits of Unions and keeping Membership intact.

NYSUT’s political efforts have played an important role in numerous victories at the state and local levels, with the Union’s Candidate Pipeline Program elevating candidates across the state.

Looking ahead to the remainder of 2020 and beyond, Pallotta said NYSUT has strengthened its bonds amid the Coronavirus Pandemic as Members support one another during a difficult time for themselves, their students and their families.

The Union’s strength will be essential in fighting against potential cuts to education as the state faces an economic crisis, he said.

“Never before have we faced challenges like we are facing right now, but I know that as a Union representing Teachers, School-Related Professionals, Higher Education Professionals, Health Care Workers and many others, we can be an integral part of charting a better path forward for New York,” Pallotta said. “I’m proud of what my Union Sisters and Brothers are accomplishing together in this unprecedented time and look forward to working with them in the years ahead.”

Thursday’s Representative Assembly was held virtually for the first time in the Union’s history because of pandemic-related restrictions.