In Age Of COVID-19, Its Time To Take A Different Approach to Introducing Young People To A Career In The Trades: Students In Ohio Get A Virtual Tour Of Unionized Plumbers & Pipefitters Apprenticeships 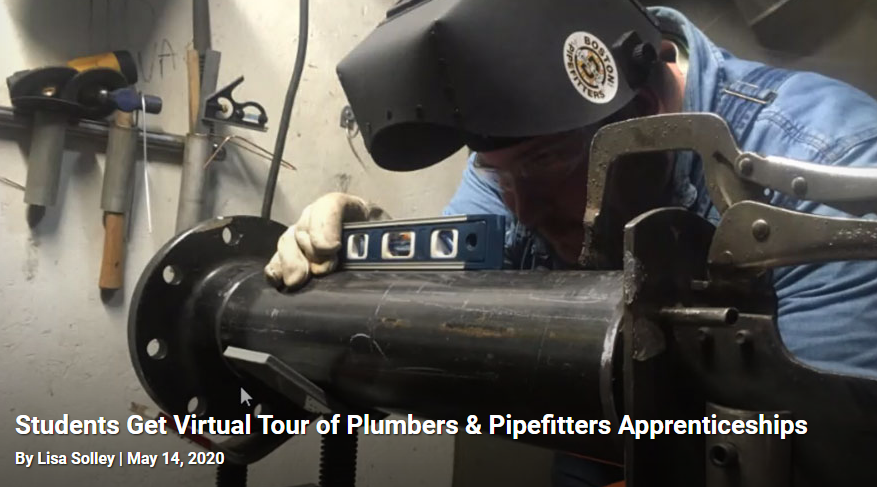 Competition is tough, but if accepted into the tuition-free, five-year program, Boyarko said Apprentices work full time with contractors - mainly on commercial and industrial jobs, attend classes two nights a week with a starting hourly rate of $12.90 - plus health care.

The pay scale increases each year, with fifth-year Apprentices earning $29 an hour.

The Apprenticeship Program typically takes about 15 new Apprentices annually from 50 to 150 applicants.

Boyarko says while there is a lot of competition, recent high school graduates have been accepted.

“The number of Apprenticeships ‘depends on the work picture.’  This year ‘obviously is looking pretty crazy because we don’t know what’s going on,’” he said. “Right now ‘we have a lot of guys that aren’t working because a lot of things are shutdown.’”

Because of the Coronavirus Pandemic that has shuttered a majority of business, about half of the 60 current Apprentices are not working, but Boyarko said some are starting to come back.

Bringing on new Apprentices this year was put on hold at this time.

Applications can be found on Local 396’s website from September through April at which time interviews begin and tests are administered.

“When I was in high school, and right out of high school,’ I didn’t have much of an idea about what I wanted to do,’” he said. “Pretty much everybody told me ‘I had to go to college.’  ‘I never considered being a Plumber as a career or anything in the Skilled Trades.”

The Union’s Training Facility has three labs, including a computer lab and six classrooms used for five different apprenticeships programs, such as stick welding and heating and ventilation, or HVAC (Heating, Ventilation and Air Conditioning).

To Directly Access This Apprenticeship and Training News Labor Story In Its Entirety, Go To: https://businessjournaldaily.com/students-get-virtual-tour-of-plumbers-pipefitters-apprenticeships/