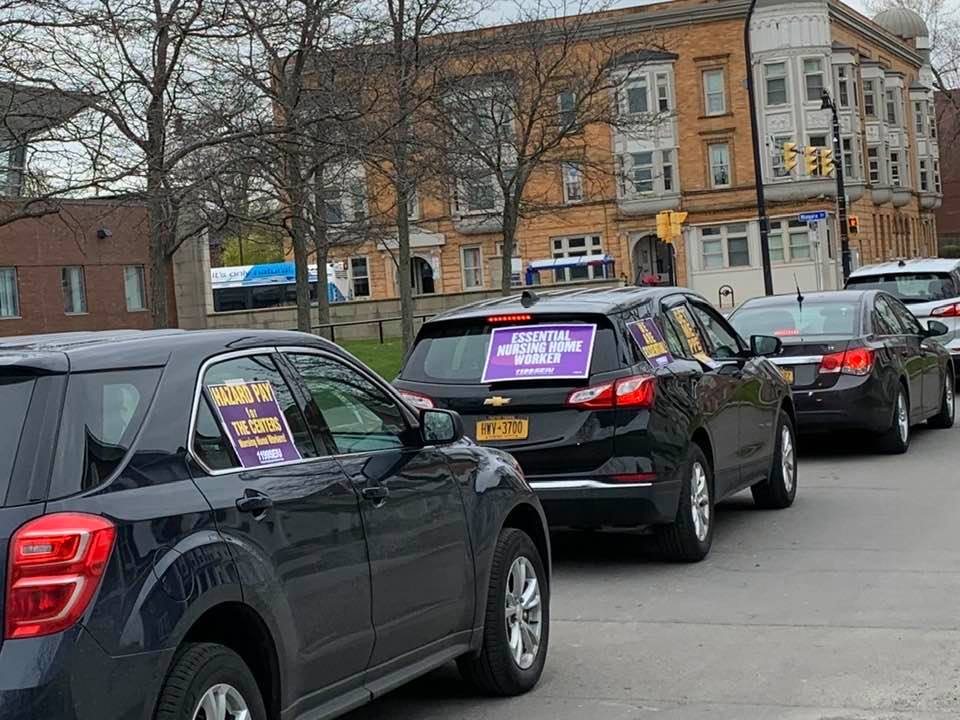 The vehicles honked their horns and displayed signs on the sides of each vehicle in support of the 1199 SEIU Members who are working inside the two facilities.

Yet, unlike many other nursing homes in the Buffalo area, the centers’ corporate owners have “refused to offer bonuses or premium pay” to their Union-represented Workers, 1199 SEIU Representatives said.

The average wage at the two facilities is less than $15 an hour, they said.

The Centers run 49 Skilled Nursing Homes and is one of the largest operators in New York State.

Several of the Workers spoke publicly about what is going on behind closed doors:

“When things ‘started to get bad’ and our Co-Workers ‘were getting sick, we asked the owners for Hazard Pay,’” said Annette Rogers, who has worked as a Unit Clerk at Buffalo Center for 20 years. “They ‘told us to just do your job, that’s what you signed up for.’”

Dorinda McDougald, a Certified Nursing Assistant (CNA) employed at the Ellicott Center for Rehabilitation and Nursing for the past 22 years, said: “Nursing Home Workers ‘are on the front-line everyday putting our lives at risk by caring for our residents.’  ‘Without question, we deserve’ Hazard Pay.”

John Hill, who’s worked in maintenance at the Buffalo Center for Rehab and Nursing since 1995, said: “I ‘have to suit up in my hazmat-style gear every day to fix toilets, lights and make sure telephones work so residents can talk to loved ones.’  ‘The right thing to do would be to give us some kind of recognition for the risks we are taking for our residents.’”

Sheila Lewis, a Licensed Practical Nurse (LPN) who has worked at the Buffalo Center for more than two decades, said: “I work on the COVID Unit.  ‘I put my life in jeopardy every day I walk on my wing and so do my Co-Workers.’  ‘We deserve’ Hazard Pay.”