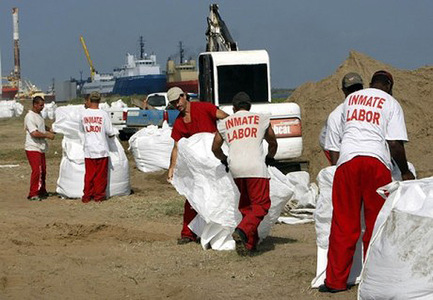 For decades, prisoners in American Correctional Facilities have worked for no wages or mere pennies an hour.

As the United States attempts to reduce transmission of COVID-19, more than a dozen states are now relying on this captive Labor Force to manufacture Personal Protective Equipment (PPE) that is badly needed by Health Care Workers and other Front-Line Responders.

Prisoners in Missouri are currently earning between $0.30 and $0.71 an hour to produce hand sanitizer, toilet paper, and protective gowns that will be distributed across the state.

In Louisiana, prisoners are making hand sanitizer for about $0.40 an hour.

And in Arkansas, where incarcerated Workers are producing cloth masks for prisoners, Correctional Officers and other Government Workers, their labor is entirely uncompensated.

This unprecedented health emergency is re-exposing how our country’s long-held practice of paying nothing or next-to-nothing for Incarcerated Labor, with no Labor Protections, is akin to modern-day slavery.

Prisoners are not protected by the Fair Labor Standards Act (FLSA), the Federal Law establishing minimum wage and overtime pay eligibility for both Private Sector and Government Workers.

In 1993, a Federal Appeals Court held that it is up to Congress, not the courts, to decide whether the FLSA applies to Incarcerated Workers.

Courts have also ruled that the National Labor Relations Act (NLRA), which guarantees the right of Private Sector Employees to collective bargaining, does not apply in prisons.

Even worse, prisoners are excluded from the U.S. Occupational Health and Safety Administration (OSHA) protections that require employers to provide a safe working environment.

This dehumanizing lack of protection for Prison Workers has long subjected them to conditions that have endangered their physical safety.

Amid a health threat that worsens in crowded environments, many prisoners are working without any mandated protections.

Congress must amend the language of Federal Employment Protections to explicitly extend to work behind bars.

Forced labor in prisons has its roots in the post-Civil War Reconstruction period, when Southern planters faced the need to pay the labor force that had long worked for free under brutal conditions to produce the economic capital of the South.

Though the 13th Amendment abolished “involuntary servitude,” it excused forcible labor as punishment for those convicted of crimes.

As a result, Southern states codified Punitive Laws, known as the Black Codes, to arbitrarily criminalize the activity of their former slaves.

Loitering and congregating after dark, among other innocuous activities, suddenly became criminal.

Arrest and conviction bound these alleged criminals to terms of incarceration, often sentenced to unpaid labor for wealthy plantation owners.

In the following decades, Southern States, desperate for cheap labor and revenue, widely began leasing prisoners to local planters and Northern Industrialists - who took responsibility for their housing and feeding, a practice known as Convict Leasing.

Under this system, the captive labor worked long hours in unsafe conditions, often treated as poorly as they had been as slaves.

Records approximate that on an average day between 1885 and 1920, 10,000 to 20,000 prisoners - the overwhelming majority of them Black Americans - continued to toil under these insufferable circumstances.

In the 1930s, a series of laws prohibited state prisons from using Prison Labor, but the Federal Government continued to rely on this workforce to meet the demands of the rapidly changing markets of mid-century.

To Directly Access This Labor News Story, Go To: https://labornotes.org/blogs/2020/05/covid-19-highlights-need-prison-labor-reform