Published Wednesday, May 13, 2020
by Marc Bussanich/LaborPress.org 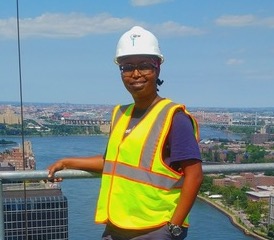 (NEW YORK CITY) - New Building Trades grad Elsie Ingabire recently returned to work after being furloughed for a month due to the COVID-19 lockdown.

Ingabire left her construction job at Rockefeller Center on a Friday evening in early March, when she got a call from a supervisor telling her she was being furloughed.

“I got a call as I was heading home,” Ingabire tells LaborPress. “He said that I’m being furloughed because the job is shutting down due to the pandemic.  I was laid off for a month.”

The first week being out of work was actually time Ingabire could enjoy relaxing at home with her wife after studying and working so hard to create a new career for herself.

“I ‘just lounged around.’  ‘I relished the freedom of not having to worry about school or work.’  ‘I let my body rest for a while,’” she says.

But by the second week, Ingabire says she had exhausted everything she could fix around the house and became bored.

For the last two weeks, however, she’s been back at work installing electrical equipment at the Farley Post Office, which is being transformed into a 255,000-square-foot train hall.

When completed, the Moynihan Train Hall will be bigger than Grand Central Terminal’s main concourse.

Ingabire usually works with a crew of 15 people, but as the COVID-19 lockdown continues, it’s just her, a Journeyman, the foreman and an occasional Apprentice.

“I was a ‘little nervous about going back,’” Ingabire says. “I ‘didn’t know what the protocol was, I didn’t know how many people would be on the job site.’”

Ingabire has come a long way since she first started as an Electrician Apprentice with International Brotherhood of Electrical Workers (IBEW) Local 3 in March 2019.

She was working at a New York City Housing Authority (NYCHA) Complex in Chinatown helping to build and install generators for ARK Electric.

Ingabire was then hired by JG Electrical Installations to work on a project at Rockefeller Center before she got the call that she was being furloughed.

She noted that she didn’t know anyone at the job site that had contracted the Coronavirus, but was hearing rumors.

“The company ‘doubled the number of masks and gloves on the job site so that we could all feel a little bit more safe while working,’” Ingabire says.

Ingabire credits Skanska - the company overseeing the Moynihan Train Hall Project and one of the world’s leading Project Development and Construction Groups - with supplying Workers with the necessary Personal Protective Equipment (PPE).

Workers are also prohibited from entering the job site until their temperatures are checked.

Anyone registering an elevated temperature is sent home.

To Directly Access This Labor News Story, Go To: http://laborpress.org/ibew-local-3-apprentice-returns-to-work-after-month-long-furlough/