In Memoriam: A Tribute To X-Ray Technologist John Poleon - Communications Workers Of America Local 1168 Member Believed To Be First Front-Line Medical Worker At A Buffalo Hospital Who Has Been Lost To COVID-19 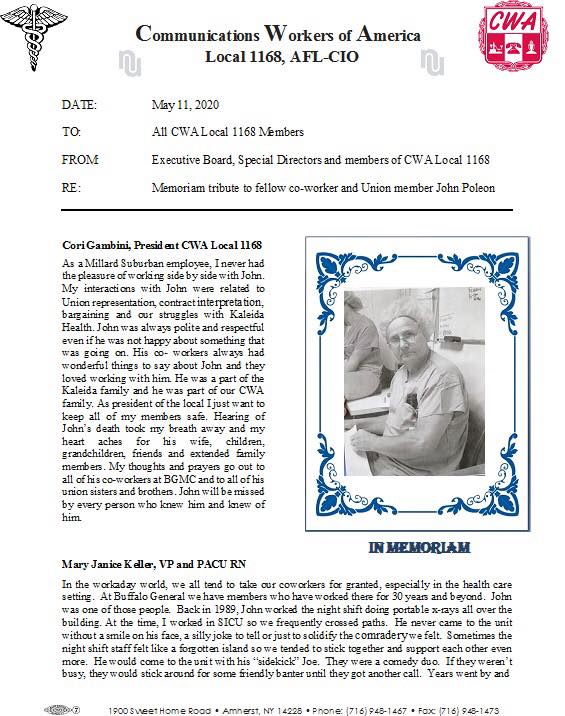 John Poleon was a 63-year-old X-Ray Technician and Communications Workers of America (CWA) Member who was employed at Buffalo General Hospital.

Poleon recently passed after contracting the Coronavirus and is believed to be the first Front-Line Medical Worker employed at a Buffalo Hospital who has been lost to COVID-19.

He is being described as a “passionate and selfless” Medical Workers who was also a proud and devoted Union Man.

Today, Poleon’s fellow CWAers paid tribute to him in a posting on the Social Network Facebook:

CWA Local 1168 President Cori Gambini: As a Millard Suburban Employee, I never had the pleasure of working side by side with John.  My interactions with John were related to Union representation, contract interpretation, bargaining and our struggles with Kaleida Health.  John was always polite and respectful, even if he was not happy about something that was going on. His Co-Workers always had wonderful things to say about John and they loved working with him.  He was a part of the Kaleida Family and he was part of our CWA Family.  When I received the call that our Union Brother was admitted to the ICU in the hospital he worked at, it took my breath away.  As President of the Local, I just want to keep all of my Members safe.  We were all working in fear but kept pushing through it.  My 4,800 Members are all at risk.  It’s real, the fear is real.  Our lives are on the front-line of a war.  We received the call that he died in the ICU, where as a Radiological Technologist he cared for patients for decades.  Every single person who knew him had nothing but beautiful things to say about him.  We lost a family member and we will never forget.  My heart aches for his wife, children, grandchildren, friends and extended family members.  My thoughts and prayers go out to all of his Co-Workers at Buffalo General and to all of his Union Sisters and Brothers.  John will be missed by every person who knew him and knew of him.  May John RIP.  We will miss you, but somehow I know you will be CWA UNION STRONG and will be standing by our side.  Fly high John. 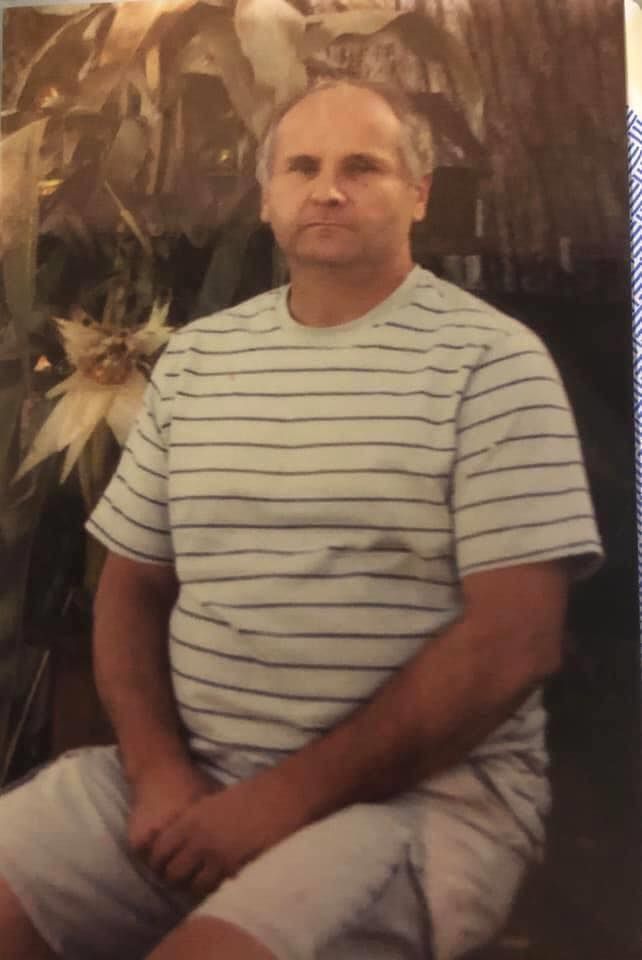 Mary Janice Keller, VP and PACU RN: In the workaday world, we all tend to take our Co-Workers for granted, especially in the health care setting.  At Buffalo General, we have Members who have worked there for 30 years and beyond.  John was one of those people.  Back in 1989, John worked the night shift doing portable x-rays all over the building.  At the time, I worked in SICU so we frequently crossed paths.  He never came to the unit without a smile on his face, a silly joke to tell or just to solidify the comradery we felt.  Sometimes the night shift staff felt like a forgotten island so we tended to stick together and support each other even more.  He would come to the unit with his “sidekick” Joe.  They were a comedy duo.  If they weren’t busy, they would stick around for some friendly banter until they got another call.  Years went by and I took a job in the PACU.  Kaleida decided to create a dedicated OR Rad tech team.  They were and still are responsible to cover all ORs and the PACU.  John took a job there and worked tirelessly every day to “get the job done.”  His voice, booming across the PACU shouting: “X-ray” in his most characteristic way will not be forgotten soon.  He frequently stopped to talk to me, usually with a Union question but many times, just to talk.  He spoke about getting ready to retire and spend time with his family.  Unfortunately, he never got that opportunity.  COVID-19 took him before his time.  Anyone who knew him will remember him fondly.  He was a gentle and caring man – a one of a kind!

Mark Amborski, Lead OR Rad Tech: John should be remembered as a guy who would always be here on time.  He had great one-liners that made you laugh out loud.  He enjoyed working with the students, and was just a decent person.  John was a private person and kept to himself and his work.  He always tried his best to help when he could.  John was an avid outdoorsman, liked four-wheeling, and hunting and spending time with friends and family.  John was my Co-Worker for almost thirty years.  We will all miss him.  He was part of the Imaging Department’s foundation for my generation.

Cindy Harris, MICU RN: No matter how bad the night was, he would come up and put a smile on your face.  I really cried for him and his family.  This one hit home to me.  The last few years I walked into work with him and his sexy shorts!  LOL.  He would always yell to me: “Cindy Harris, the hardest working Nurse at BGH!”  Then I’d poke him on the shoulder and at the café elevators he would say: “Have a good one!”

Debbie Gates, Assistant Nurse Manager of SICU, ILCU and Dialysis: John was always a bright spot even on the darkest of days.  He’d always make a point to come and say hello and share one of his warm smiles.  He would always thank me when I would go in and help move the patient so that we could get the plate behind them to take the portable x-rays.  He was a wonderful example of someone who loved their job and went out of their way to make sure the patient was comfortable.  John will be missed - out of sight but definitely not out of mind or hearts. 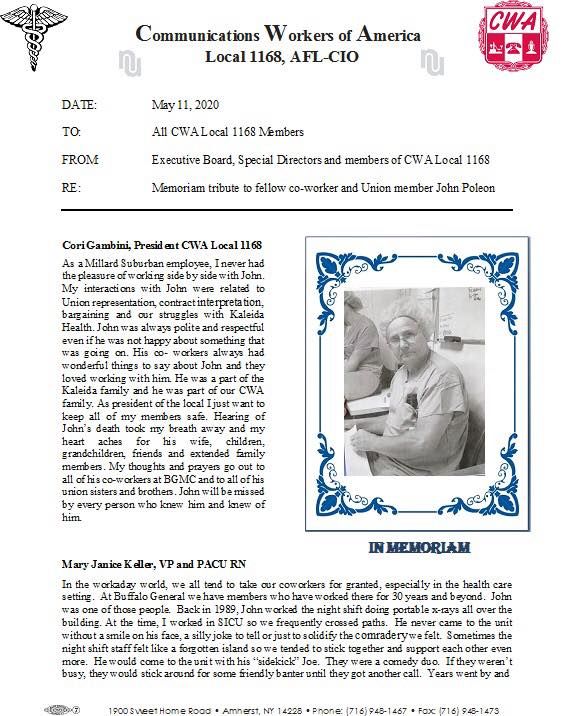 Rosie St. Pierre, BGMC RN AVP and MICU RN: John was an institution!  Everyone that met him instantly liked him!  Most of that massive hospital knew John.  He was a hard Worker, an ethical man of good character.  He really made every day brighter with his simple kindness.

Michael Dunphy, CWA VP and Bariatric Clinic LPN: John and I met way back in the late 80’s.  He and Joe S. were the night X-Ray Techs, I worked on thirteen north.  Everybody knew them as John and Joe “the X-rays Guys.”  They did most of the portables together and if you ever had a need for a stat x-ray it was usually both of them that would come up to the unit.  In the 90’s John and I got better acquainted and became friends.  We began to play volleyball together.  Our team consisted of Karen, Mary, Janine, Todd, John and Myself, although were weren’t very good, we did win our share of matches.  Our team was all Nurses except for John.  He was the calm and sensible one (let’s just say that up front)!  Writing this note makes me remember all the laughs and fun we had back then and I am happy that I got the chance to meet John and be introduced to Cindy his wife.  She came to watch us play many times and of course lose!  Cindy I send you my sympathies.  John will be missed by all that knew him.  He was a fine man, a genuine, caring and always kind type of guy.  John I bid you farewell.  I am glad to have called you friend and I pray you Rest in Peace.