WNY Labor Movement Call To Action: NALC Branch 3 Asks Union Members To Contact Their Congressional Reps & The White House To Request Immediate Relief For The USPS In The Next Stimulus Bill

Branch 3 President David Grosskopf, Jr.: If the USPS Does Not Get This Funding, Its Operations May Cease To Exist By The Fall Of This Year. That Will Result In The Loss Of Affordable, Universal Service To The Country."

(WESTERN NEW YORK) – The President of the National Association of Letters Carriers (NALC) Branch 3 is asking the Western New York Labor Movement, Union Members and their families to contact their Congressional Representative and the White House to request immediate relief for the United States Postal Services in the next Stimulus Bill.

This vote will take place on Monday, May 11th.  Click here to find your Congressional and U.S. Senate Representatives: https://app7.vocusgr.com/WebPublish/Controller.aspx?SiteName=NALC&Definition=ViewIssue&IssueID=2512.  And for more information, go to: https://www.nalc.org/.

"On behalf of Branch Three Buffalo/WNY of the National Association of Letter Carriers, we are asking Union Members and their families to contact their Congressional Representatives and the White House to ask that the United States Postal Service be provided immediate relief in the next Stimulus Bill.  This vote is Monday, May 11th,” NALC Branch 3 President David Grosskopf, Jr. said in a statement that was e-mailed out this week to all affiliated Labor Unions by the Western New York AFL-CIO Area Labor Federation.

“If the USPS does not get this funding, its operations may cease to exist by the Fall of this year. That will result in the loss of affordable, universal service to the country and hundreds of thousands of Unionized jobs,” Grosskopf continued. “The USPS is the largest organized employer in the United States. The White House for the first time in history is calling for the complete privatization of the USPS.  Additionally, they are holding the USPS hostage by telling the employer that if they will not give up Collective Bargaining Rights, among other things, they will not be given the stimulus money to survive.  Again, we ask and urge all our friends to contact their Congressional Representatives and the White House as soon as possible."

The Union also sent out a White Paper from the NALC to underscore the urgency of the needed action.  The three-page piece appears later in this Labor News Report.

During an interview with WNYLaborToday.com, Grosskopf said Republican President Donald Trump was “holding the Post Office ‘hostage’ with (the stimulus) funding.”

Trump says, Grosskopf added, “I’ll give you the money, but we have to privatize it, negate our Collective Bargaining Agreement, and appoint the next Postmaster General. “

“The Post Office needs ($75 billion) in stimulus ‘to keep it running.’  This is an ‘urgent’ need.  If we ‘don’t get the funding the Post Office could cease by September.’  ‘It would mean’ Americans ‘losing an affordable, universal system.’  And, ‘if there is’ a Coronavirus vaccine developed, it would be the Post Office and its Letter Carriers ‘who deliver it’ to Americans.  We deliver (1.2 million) packages ‘a day, including many to rural area, who depend on us as the only affordable means of getting their (medicines and medical supplies).’  ‘They rely on us to stay alive,’” he said.

If the USPS - which serves 160 million Americans and businesses each and every day, ceases to exist, Grosskopf says the Federal Government will “sell it off to some corporate monster.”

NALC Branch 3 represents 2,000 Members here in Western New York, including 1,400 who are active Letter Carriers.  On a daily average, each Letter Carrier makes as many as 600 to 700 stops and delivers as many as 200 to 300 packages, Grosskopf said.

And as being deemed Essential/Front Line Workers, Grosskopf says there is “no bigger cheerleader” than himself when it comes to the jobs they are doing during the Coronavirus Pandemic.

“Everyone is wearing PPEs (Personal Protective Equipment).  ‘They’re working day in, day out - they didn’t take a day off.’  ‘They’re out there, doing their jobs - every day,’” he told WNYLaborToday.com.

However, as of today (Thursday, May 7th), Grosskopf said there have been 320 NALC Branch 3 Members who have been placed on administrative leave, another 45 who have been quarantined and nine who have tested positive (one still yet unconfirmed) with the Coronavirus.

Of that total, 243 have returned to work, he said. 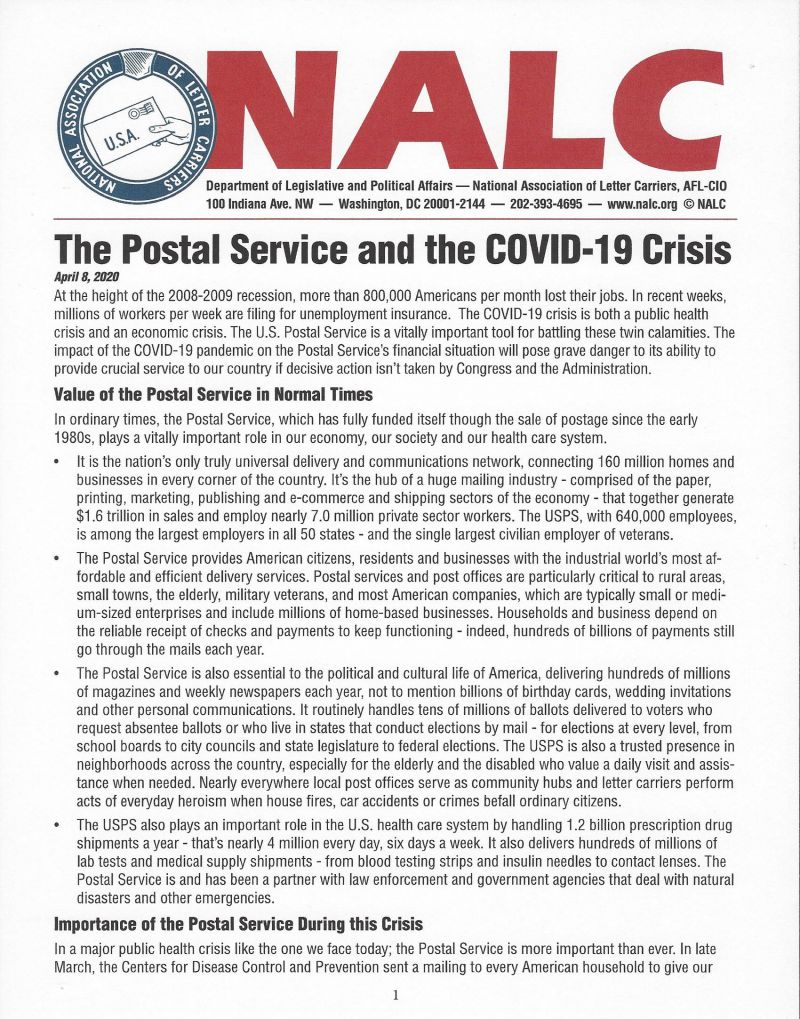 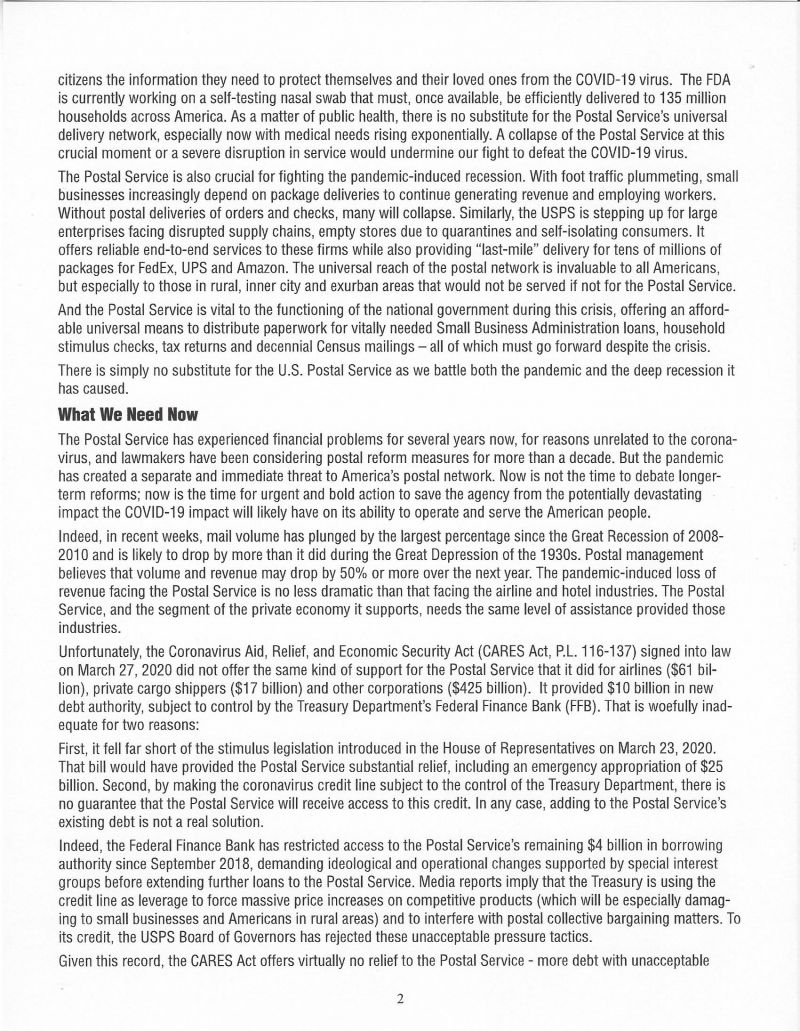 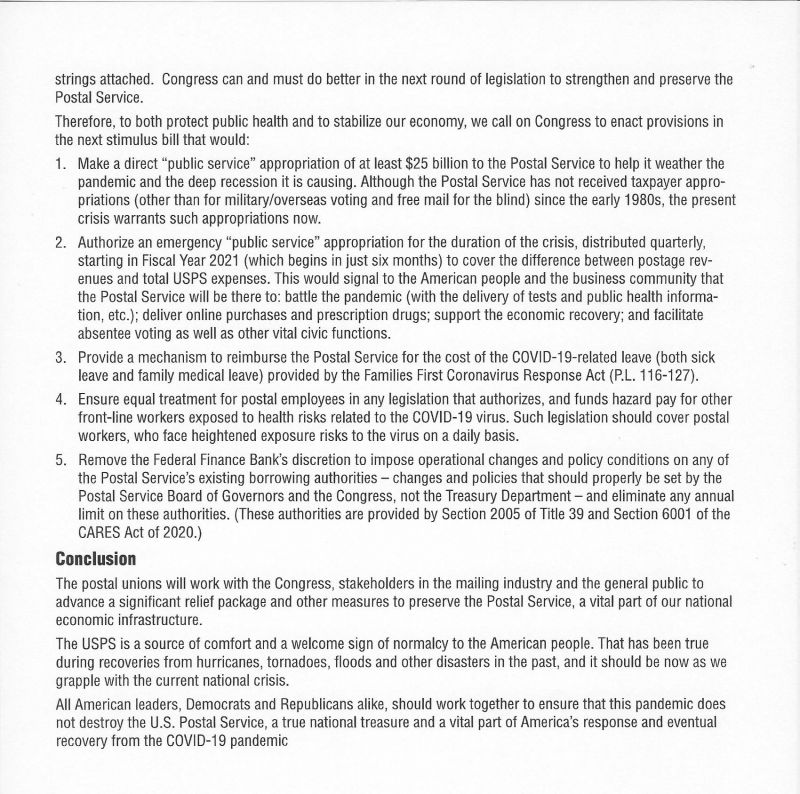