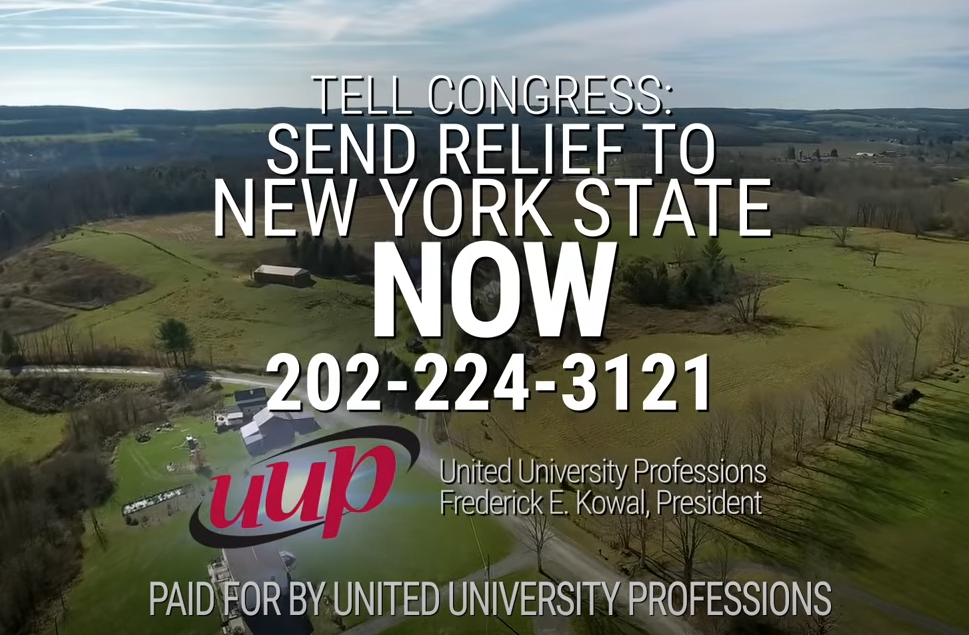 The 30-second ad - “We Are New York (which can be viewed at https://bit.ly/35nlZIt) - runs through May 11th and will air on cable news stations in New York City, Brooklyn, and Albany and Nassau counties, and on YouTube in Albany, Buffalo, Syracuse, New York City and Nassau County.  A one-week Social Media Campaign - on Facebook and Instagram - will follow.

“This ad is a ‘public thank-you to thousands’ of our Members on the front lines at SUNY’s (State University of New York) Public Teaching Hospitals in Brooklyn, Stony Brook and Syracuse, as well as hospitals in Buffalo,” UUP President Fred Kowal said. “Other UUP Members ‘have been busy making face masks and shields, leading food giveaways and helping colleagues and friends whose jobs have evaporated due to the virus.’  ‘At the same time, it’s a call-out’ to our Congressional Representatives ‘to push for’ Federal dollars for New York, which ‘has been decimated financially by its necessary response’ to the pandemic.  New York ‘needs an infusion of federal funding to keep essential services such as police and fire protections and our hospitals functioning.’”

New York is the epicenter of the Coronavirus crisis in America - nearly 19,000 people have died, and the state has more than 300,000 confirmed cases, most of them Downstate.

The spot pivots, stating that New York needs help to “get back on our feet.”

It ends with the tagline: “Tell Congress: Send New York State the resources to build a better, stronger future - for all,” with the phone number to the U.S. Capitol switchboard.

UUP is an affiliate of the New York State United Teachers (NYSUT), the American Federation of Teachers (AFT), the National Education Association (NEA) and the AFL-CIO.