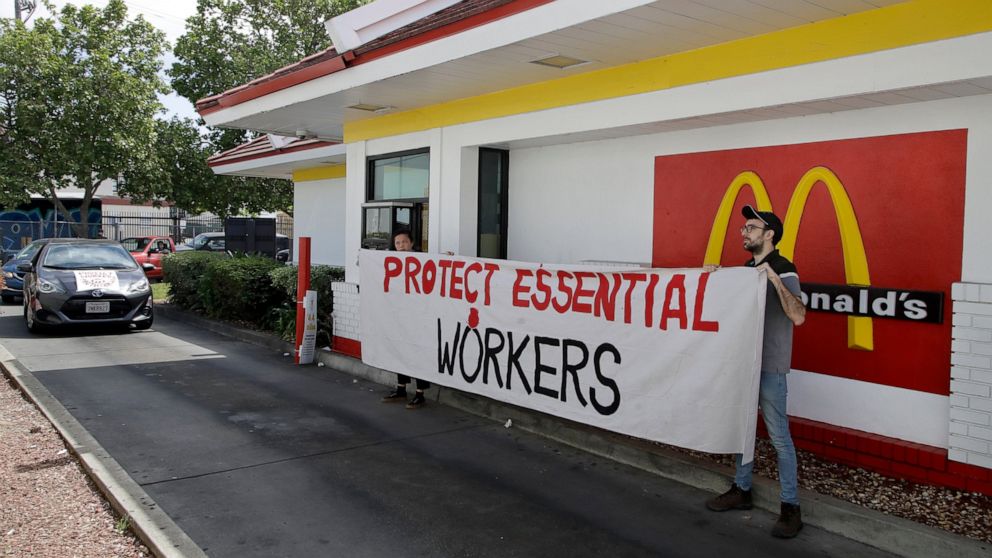 (STATEN ISLAND, NEW YORK) - Jordan Flowers never thought he would become a Labor Leader, then the Coronavirus forced him to risk his life every time he clocked in.

The Robotics Operator at Amazon’s Staten Island Warehouse helped lead one of the first walkouts at the site - a protest over the company's lack of protective equipment.

A month later, even after Amazon scrambled to provide masks and gloves and check Employees’ temperatures, Workers continue conducting scattered walkouts to protest what they say are still-risky conditions in warehouses where Workers have had the virus.

“You ‘risk your life putting in ten hours every day,’” said Flowers, 21, who has an autoimmune disease and is at heightened risk for infection. “You're ‘surrounded and you don't know who has it or who touched what to pass it on.’”

Across the country, the unexpected Front Line Workers of the pandemic - Grocery Store Workers, Instacart Shoppers and Uber Drivers, among them - are taking action to protect themselves.

Rolling job actions have raced through what's left of the economy, including Pittsburgh Sanitation Workers who walked off their jobs in the first weeks of lockdown and dozens of Fast Food Workers in California who left restaurants last week to perform socially distant protests in their cars.

To Labor Activists and Historians, the often-spontaneous job actions echo other moments in the Labor Movement when alarm about Worker safety and public health spurred organizing and reforms in meatpacking plants, New York's garment factories or coal mines.

“People's ‘fears of sickness and death are finally stronger than people's fears of their employer,’” said Daniel Graff, a Labor Historian at Notre Dame University. “It ‘might be a sort of cataclysmic opening.’”

Labor faces plenty of other hurdles.

One involves logistical barriers - organizing generally needs to happen via text or Zoom in the era of social distancing.

Workplace protests tend to happen in cars and Labor is operating under the hostile eye of Republican President Donald Trump’s Administration.

Unions typically have more power in times of low unemployment, when it’s easier for unhappy Workers - or striking ones - to find another job.

The U.S. Unemployment Rate is projected to hit 20% soon, a level not seen since the Great Depression.

In the scramble to adjust to the outbreak, some companies that are part of the “essential” economy are rushing to hire new Workers, which may temporarily give current Staff some bargaining power, but many economists project more than a year of widespread joblessness, said Jed Kolko, an Economist at Indeed.

To Continue Reading This Labor News Report, Go To: https://abcnews.go.com/Politics/wireStory/pandemic-job-actions-offer-hope-renewed-labor-movement-70389588